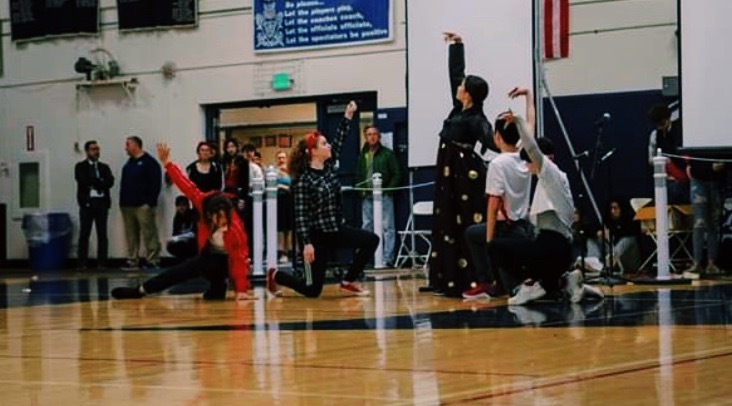 Students of KASA take on the complicated Buchaechum dance during Heritage Fair.

The Korean American Student Association (KASA) faced many struggles prior to their performance at Heritage Fair.

KASA is a club at Carlmont High School that strives to spread Korean traditions and culture to other students.

KASA’s weekly meetings before their performance at Heritage Fair revolved around the dance that they would perform.

Heritage Fair is an annual assembly at Carlmont where many of the cultural clubs perform a dance or song that reflects the traditions of their nation. This year, Heritage Fair took place on Thursday, Feb. 28.

KASA decided to perform some popular K-pop dances, and their main piece was a traditional dance called Buchaechum or “fan dance.”

Although the performance was well executed, many of the members felt as if they did not practice enough as a group prior to the event.

“We practiced twice, the Monday and Tuesday before Heritage Fair,” said Nina Chung, a junior and vice president of KASA. “However, I think it went pretty well considering that we prepared the entire performance in two days.”

A few of the students, like Luisa De León Akell, a freshman, believes that prior scheduling for practices would’ve been helpful.

“Everyone had things to do, and we were pretty busy, so I wish that we could’ve planned in advance and practiced more together,” Akell said. “We still managed to work through those difficulties though.”

Some members took it upon themselves to make the learning process quicker and more efficiently.

“I’ve been dancing for so long, so I thought the dance was pretty manageable, but I heard others were having a few struggles with it,” said Keara McKenzie, a senior. “I helped teach several students, and I wish I could do the same next year.”

Lack of practice was not the only struggle that students faced. Cody Vo, a senior, became sick before the event.

“I was pretty sick before the performance, so it was difficult for me to perform,” Vo said. “It was especially hard because it was my first time dancing. I got some help from others to learn it in a few days.”

Although the days leading up to the fair were difficult, the audience thoroughly enjoyed the show.

“I had heard about their lack of group practice from a friend, but the performance, in my opinion, went smoothly. No one looked out of place,” said Kaitlyn Parohinog, a junior. “Everyone had enthusiasm, and you could definitely tell that people had practiced on their own time.”

Despite all the problems the group had, they had a fun time performing and becoming closer to their fellow club members.

“People put a lot of effort into the dance, and everyone had positive attitudes. The group was really fun to practice with despite the stress,” McKenzie said.