‘Kung Fu Panda 3’ kicks off with a bang 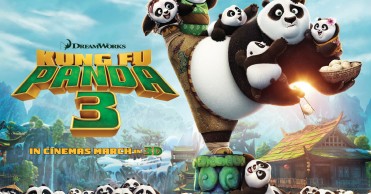 When Master Shifu (voiced by Dustin Hoffman) announced his retirement, Po (voiced by Jack Black) was entrusted as the Furious Five’s new teacher. While Po was unsure of his confidence as a teacher, he also struggled with his identity. Things began to change when he encountered his biological father, Li Shan (voiced by Bryan Cranston), who was last seen at the ending scene of “Kung Fu Panda 2.”

Like the past two films, “Kung Fu Panda 3” featured impressive scenery, but in this film, the scenery was even more impressive and authentic to Chinese culture, thanks to Oriental DreamWorks, the Chinese division of the company. The new locales of the film were as dazzling as ever, including the panda village from the end of “Kung Fu Panda 2” and a splendid spiritual realm.

The film also had an impressive soundtrack, as always. During the film, the music had varying tones reflecting Po’s hunt for identity and the light-hearted setting of the panda village, among others.

The film’s story was rather strong and compelling. With Po reuniting with Li, the film took on a path revolving around Po’s relationships with both of his fathers: Li and Mr. Ping (voiced by James Hong). The relationship among the three was the heart of the film, and it was so strong that it could elicit tears, particularly towards the end. Po’s journey in this film — to find out who he really was — also helped conclude his character arc throughout the series.

All in all, “Kung Fu Panda 3” was a grandiose masterpiece — or in Po’s words, “pure awesomeness,” and it should be watched by all, kung-fu buffs and newcomers alike.