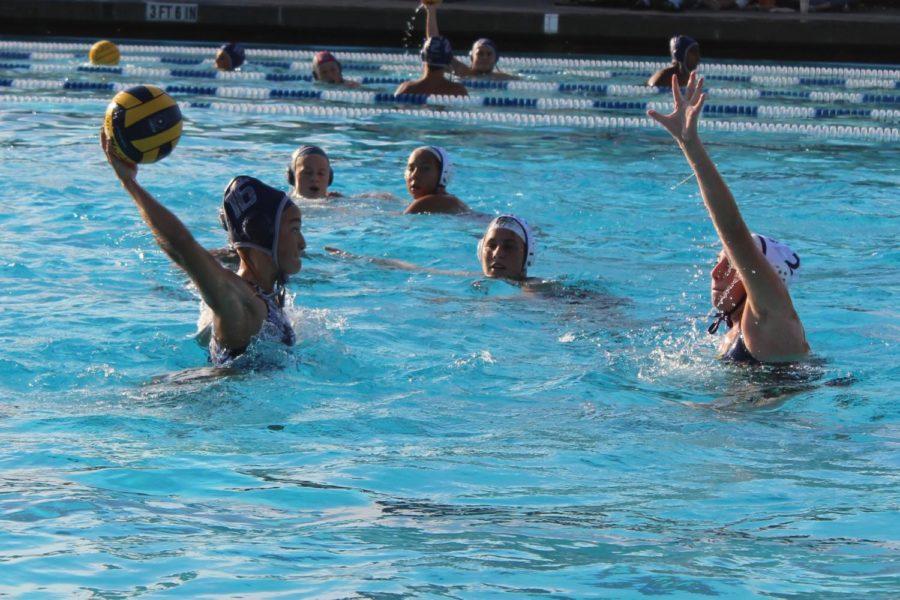 Ciera Stratton, a senior, throws the ball down the pool to score a goal for the Scots.

Seniors on the varsity girls’ water polo team played their last game at the Aquatic Center.

The game began as cheers from the bleachers filled the Aquatic Center as the Scots wished their seniors good luck in their last home game.

“I think it was a really great home game for all the seniors to play really well as a team and come out winning as a team,” said Hunter Crawford Shelmadine, a senior.

Thanks to a hard-fought offense, the Scots scored the first two goals of the game within two minutes prompting the Sequoia Cherokees to call a timeout.

Soon after, Sequoia attempted to score but threw the ball out of bounds giving possession to the Scots. Freshman Ilyana Zlobinsky scored another goal bringing the score to 3-0 Scots.

Due to a foul on Sequoia, Carlmont gained possession once again, allowing Ciera Stratton, a senior, to score yet another goal for the Scots.

Although the Scots were off to a good start, the Cherokees made a quick turn-around and were able to get on the board within the last seconds of the first quarter.

The Cherokees came into the second quarter fighting to catch up to the Scots, scoring two goals right away. If not for Amy Fullerton, a junior and the Scots’ goalie, Sequoia would have scored four additional goals in the first three minutes.

Clean offense and defense at each end of the pool put a few points on the board for both the Cherokees and the Scots. Finally, after many passes around the goal and a fight to keep the ball in Carlmont’s possession, the Scots scored just moments before halftime, bringing the score to 6-3 Scots.

The third quarter began with attempts at the goal by the Scots’, but none prevailed, giving possession back to Sequoia. Amy Yolland, a senior, was unable to protect the goal from Sequoia’s shot to the corner, making the score 6-4.

“Sequoia did a really good job of driving [swimming down the pool to the goal] and I think that’s always something we can work on so we can catch up to them,” said Nicole Turk, a junior.

Despite the Cherokees’ immediate scoring, the Scots fought hard against the increasingly aggressive Sequoia defense. Turk and Zlobinsky both scored bringing the score to 8-4 Scots.

Yolland continued to protect the Scots’ goal in the third quarter, making a reaching save at the buzzer.

“I was really happy that our team was able to account for the playing differences and come together to win against one of our big rivals,” said Fullerton.

With a four-point lead, the Scots were ready to battle in the fourth quarter.

A quick turn-around allowed the Scots’ to gain possession twice at the beginning of the fourth. They quickly brought the score to 9-4, scoring on the first but not the second possession.

Stratton then took the ball down half the pool and scored another clean goal for the Scots bringing a six-point lead for Carlmont; 10-4.

During the last seconds of the game, the Scots were able to step-up their defense preventing all but one goal for the Cherokees bringing the final score to 12-5 Scots.

“This varsity team has really bonded with each other and we are a really close-knit team. Senior night was so fun and heartwarming because this season has been the best so far,” said Turk.

The Lady Scots will play their final games of the season this Saturday in the Milpitas tournament.