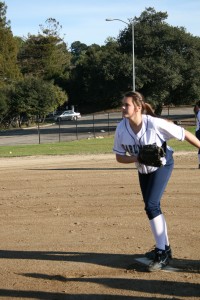 [/media-credit]The Lady Scots have always been at the top of the standings in a balanced Peninsula Bay League Division and have always been in contention to win their division with such an experienced coach, Jim Liggett.

This week the Lady Scots had three big games that they knew coming into the week, would have a huge impact on their season with three straight games, two on the road at Hillsdale and Aragon, and a home game against Burlingame.

The Lady Scots started this grueling week of games on Tuesday at home against Burlingame.  Freshman starting pitcher, Rebecca Faulkner, took this game into her own hands and pitched a complete game no hit shutout, as well as getting two hits at the plate, leading the Lady Scots too a 1-0 victory.

The next two games on the road at Hillsdale and Aragon, would be tough games to play, especially after a one run game the day before that drained the team mentally and physically. Carlmont ended up losing to Hillsdale 3-1 and Aragon 5-2.

Although the Lady Scots lost two of three this week, they still have four games left to play and if they win out, they will be in contention for yet another successful season, and possibly win the Peninsula Bay League Division title.