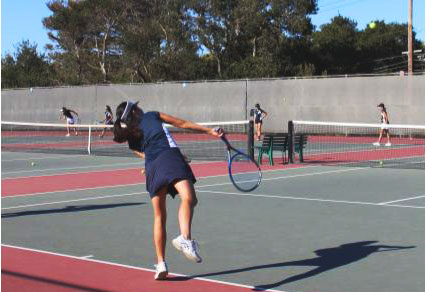 Vienna Huang, a sophomore, returns a serve while warming up.

Margaret Goldsmith, the coach of the Carlmont tennis team, welcomed both teams to the Peninsula Athletic League (PAL) finals at the start of the match. These two teams were the last ones out of 16 in the PAL tournament.

The Carlmont Lady Scots and the San Mateo Bearcats are the second and third seed teams in their league. The first seed being Menlo Atherton, who automatically got into the Central Coastal Section (CCS). This match determined who would go to the CCS championship of Carlmont and San Mateo.

The Lady Scots had been training for this moment.

“All season long, two hours a day, [and] we started a lifting program on Fridays for conditioning and strength,” said Coach Goldsmith.

The opponents lined up face to face, as the wind blew around them. The names were called for singles and doubles. The opponents shook hands with each other and with the opposing coaches, then they high-fived their own team.

Once the opponents met, the teams huddled up separately. “It’s time to start thinking tennis,” Goldsmith said in the huddle.

Right before the games started, the teams warmed up with their opponents.

Soon, the games started. The singles were playing on courts one through four, while the doubles were on courts five through seven with some doubles waiting to play. There was a total of four singles matches and seven doubles matches.

In a singles match where junior Annika Lin of the Lady Scots faced off against sophomore Sarah Fung-Smith of the Bearcats, Lin won the first set with a score of six to two.

Later, Lin won against her opponent in the second set with a score of six to one, securing her win of the match and cementing Carlmont’s victory over San Mateo.

“I think I played pretty well. I was hitting my shots, and I felt confident,” Lin said.

Lin was not the only one who found victory over her opponenets as Carlmont’s Lady Scots tennis team secured their seed in CCS with a team win over San Mateo.