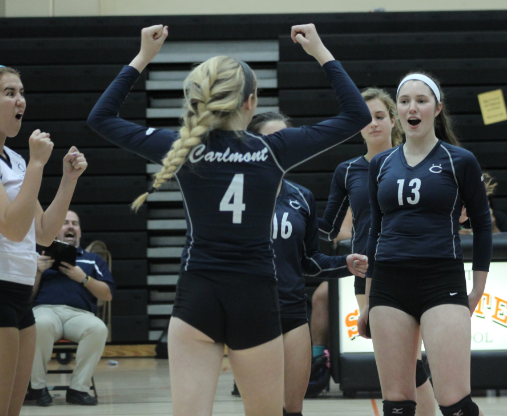 Alex Lay and Lauren Tierney rejoice after their win

Three sets. That’s all it took for the Lady Scots’ varsity volleyball team to defeat the San Mateo Bearcats.

Carlmont earned a well-deserved win against San Mateo High School’s Bearcats after losing two games in a row Thursday night. Their determination to regain their winning streak after two tough losses against Notre Dame and Menlo Atherton allowed them to triumph against the Bearcats.

The Lady Scots cruised through the first set, with a score of 14-25. The second set started off slow for both sides, and Carlmont and San Mateo were neck and neck at 19 all. Carlmont eventually pulled away on a six-nothing run and strongly closed the set 19-25.

The third and final set began with the Bearcat’s having the upper hand leading 12-6. Lady Scot’s dug deep and fought their way to victory with a final score of 18-25.

When asked about the game, Kimiko Okumura said, “You could really tell how badly the team wanted to win.” Okumura described the game as “the perfect comeback.”

Coach Chris Crader said, “The game started well, but we lost focus in the second set, and we were a little up and down. But my players had it in them to finish strong and pull out a win.”

Crader continued to say, “We wanted to regain our winning streak. Bad. And this game was the perfect opportunity to do it. Even though we were inconsistent, we did what we needed to do.”