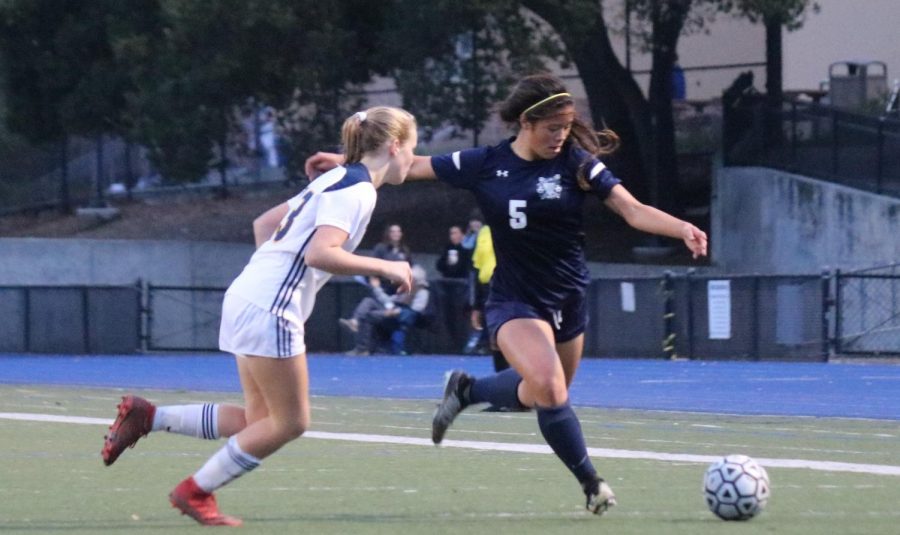 Sam Phan, a senior, dodges the last of three Menlo defenders before scoring her first goal of the game.

After withstanding some pressure from Menlo for the first 20 minutes of the game, Carlmont’s girls’ varsity soccer got the spark it needed as Jenna Reinhardt set up Maddie Cunningham for the game’s opening goal.

Momentum shifted to the Lady Scots from there, with Cunningham scoring twice and senior Sam Phan dishing out two assists in a 5-0 rivalry game victory on Tuesday.

“We came into the game with a lot of confidence after beating Sacred Heart, and we really came out swinging,” said Izzy Lynagh, a junior.

The critical moment came in the 30th minute after Menlo, who had looked like the team most likely to get on the score sheet, first turned over the ball for the sixth consecutive time. Rachael Summers forced the turnover and passed the ball far down the pitch, from the right-wing to Reinhardt, who one-touched it past Menlo’s defense right into Cunningham’s path.

“We’ve spent a lot of practicing these scenarios,” Summers said. “We have drilled that long pass over and over, so when I saw the opportunity, I knew exactly what to do.”

Cunningham just had to beat the keeper. She did so by gently chipping the ball over the goalie from the right post for a 1-0 lead.

The Lady Scots controlled the ball for the majority of the first half in an attempt to gain an early edge.

“We wanted to build off that early lead,” said Sabrina Kelley, a junior. “Our defense was shutting them down and were dominating them on offense.”

The Lady Scots aimed to break down Menlo’s defense in an attempt to single out the goalkeeper.

“We wanted to keep attacking fiercely in hopes of getting one-on-one opportunities with the goalie,” Lynagh said.

In the 18th minute of the game, freshman Emilie Brack received a long cross-field pass and dribbled the ball through the last Menlo defender, giving her a wide-open shot on the goalie. She flung the ball into the top left corner out of the reach of the Menlo goalie.

At half time, Carlmont had a healthy 3-0 lead over the Menlo Knights.

Carlmont continued its attack in the second half.

“They kept up their first-half energy and intensity and carried into the second half, and that was very impressive,” said previous girls’ soccer coach James McDowell.

Even with a four-goal lead, the Lady Scot’s continued to attack Menlo’s defense.

In the 62nd minute, Lynagh rocketed the ball right in front of Phan, who blasted through the Menlo defense, single-handedly beating all three remaining defenders in fierce fights for the ball. She dribbled up with nothing but the goalie in her way and fired the shot perfectly into the top right corner of the goal.

“I saw an opportunity, and I took it, and it obviously paid off,” Phan said. “But I wouldn’t have been able to score without Izzy’s perfect pass.”

The teams’ chemistry was another factor that gave them an edge.

“We had a really great game. We all connected really well, and I think it was because we were having fun, and the bond our team has is strong,” Summers said.

As the Lady Scots remain undefeated, they look ahead to the Firebird tournament starting Friday, Dec. 13, against Homestead.