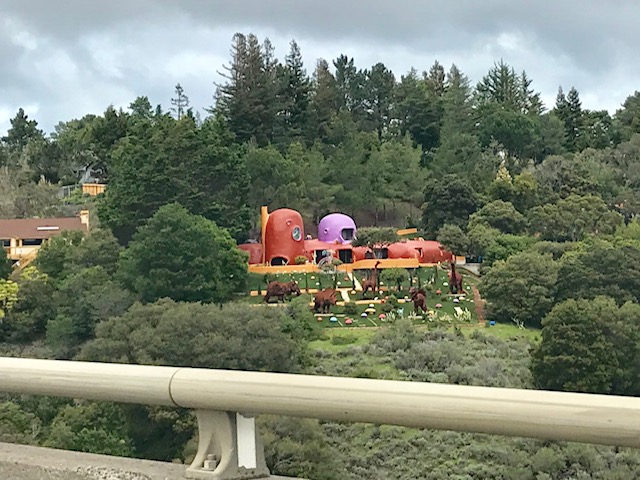 The backyard of the Flintstone House and the added dinosaur constructions. The owner has recently been sued by the city of Hillsborough for these constructions.

The town of Hillsborough filed a lawsuit against Florence Fang, owner of the “Flintstone House” and former publisher of the San Francisco Chronicle. According to Mercury News, the town called the house a “highly visible eyesore,” and seek to have metal constructions of prehistoric animals removed from it along with other features.

The house itself was built in 1976 by Bay Area architect William Nicholson and has since turned into an iconic landmark according to Flinstone House 280. Florence Fang purchased the home in 2017, which is when she started remodeling and installing items such as a retaining wall, steps, columns, gates, a parking strip, and a deck. She also had installed multiple metal constructions of prehistoric animals, which were called “unenclosed structures” in a decision by the Hillsborough administrative panel in October 2018. In this decision, the constructions were also required to have a building permit and planning approval. However, after continuing to make improvements to the home without the required permit, attorney Mark Hudak, who represents Hillsborough in this case, filed a complaint to the Superior Court of San Mateo.

“There’s a process for design review and permitting that every resident has to follow, and there’s just no way to make an exception for Mrs. Fang just because she has a vision for this property,” Hudak said.

However, Sean Fang, grandson of Florence Fang thought differently of the metal constructions and insisted that they should stay.

“I think the dinosaurs are beautiful. They make everyone smile and should stay,” said Sean Fang.

Since the lawsuit against Florence Fang, she has issued to countersue Hillsborough according to Mercury News.

Angela Alioto, Florence Fang’s Attorney has promised to fight for the Flintstone House and stated that Florence Fang has a right to keep her dinosaurs, as they are entertaining to the masses.

“Mrs. Fang has made people smile, she’s giving them joy. What’s not to love about Dino, who acts like a dog? What is wrong with these people?” said Alioto.

With the lawsuit still currently underway, the judge’s ruling is to be awaited.

“Let’s hold Fred and the Dino alive and work collectively to keep on smiling. I’ll combat this the most effectively I can. Keep tuned!” Florence Fang said.