Liberals display intolerance towards the intolerant 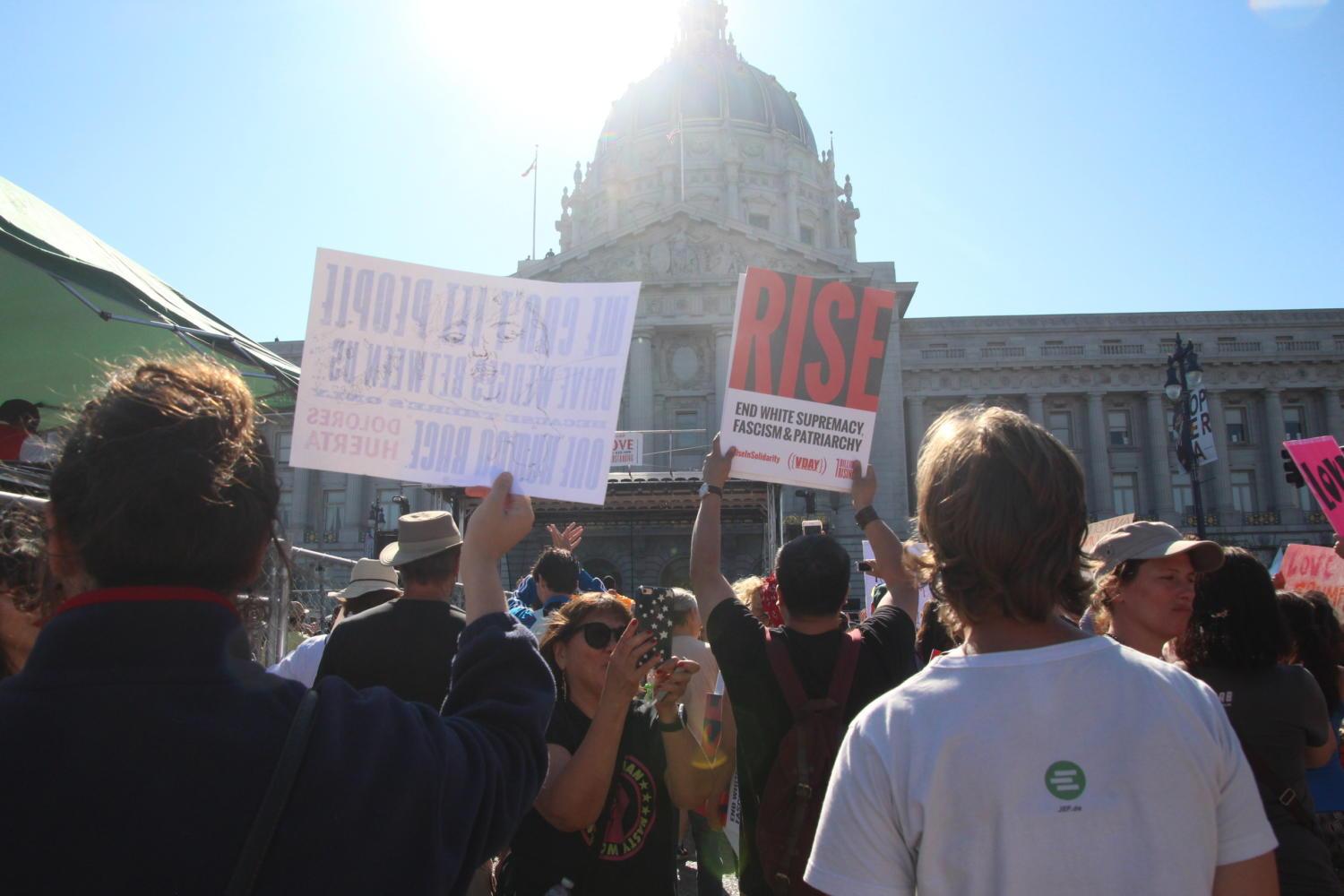 When it was announced that Patriot Prayer, an Oregon-based group claiming to promote free speech, would be coming to San Francisco to protest only two weeks after the deadly Charlottesville protest, San Franciscans planned a counter-protest consisting of thousands of people, shut it down, and turned a would-be political protest into a city-wide festival and celebration of acceptance and love.

Although Patriot Prayer was granted the permit required for them to legally protest at Crissy Field, leader Joey Gibson decided to call off the event the night before it was supposed to take place.

What followed was a mass of confusion, as both protesters and counter-protesters struggled to figure out what to do with themselves.

Saturday afternoon, hundreds of counter-protesters marched from Alamo Square to the Civic Center. There were almost no sightings of the original protesters that day, and law enforcement was pleasantly surprised to find that there was almost no violence. San Francisco had successfully scared the protesters into hiding.

Civic Center consisted of a circle of food trucks, with long lines of people waiting for their Mac n’ Cheese and Philz Coffee. If one was to watch for long enough, they would see a couple of police men step out of their cars, strapping on their huge guns and adjusting their equipment, only to walk up to the Philz truck to grab a coffee.

Typical San Francisco. It was the same atmosphere as events such as Pride and the Saint Patrick’s Day Parade. But this wasn’t supposed to be a parade. This was supposed to be a protest, a stand against… well, no one seemed to know what they were fighting against actually.

There was an overwhelming sense of pride and accomplishment from the San Francisco community as everyone rejoiced in the defeat of the so called “white supremacists.”

San Francisco had won. They had completely shut out Patriot Prayer, and effectively formed a counter-protest large enough and passionate enough to cause Gibson to call off the entire event.

San Francisco won, but who lost? Joey Gibson didn’t lose – yes he got arrested in Berkeley on Sunday, but he anticipated, and maybe even desired that outcome.

Patriot Prayer didn’t lose this weekend, but tolerance did: tolerance and the First Amendment.

The very First Amendment to the Constitution reads, “Congress shall make no law respecting an establishment of religion, or prohibiting the free exercise thereof; or abridging the freedom of speech, or of the press; or the right of the people peaceably to assemble, and to petition the Government for a redress of grievances.”

Although the San Francisco government did grant Patriot Prayer the permit needed for them to assemble at Crissy Field, they also publicly denounced the group, antagonized the situation, and mislabeled Patriot Prayer as a hate group.

There’s a sentence you wouldn’t expect to hear.

Here in the Bay Area, many proudly declare themselves as liberal. Liberal, meaning they are open minded, inclusive, accepting of all races, ethnicities, genders, and religions.

Liberal, but apparently not accepting of anyone with different political ideals.

Saturday in San Francisco and Sunday in Berkeley were two very different scenes.

On one hand, you’ve got San Francisco, where a would-be counter-protest pretty much turned into your everyday San Francisco festival. Most people there didn’t seem to be very politically invested, they were just really into liberalism and really proud of their progressiveness. Sure, some of the counter-protesters were prepared to put their lives at risk for their cause, but most didn’t even know exactly what they were protesting.

And then there’s Berkeley, where hundreds of Democrats, anti-Fascists, and Anarchists faced off against Gibson and a small group of right-wing protesters.

The result? Multiple arrests, civilians, including Gibson, being pepper sprayed and beaten by counter-protesters, and law enforcement firing off non-lethal shots.

There’s a common factor between the two counter-protests: intolerance.

Intolerance towards the intolerant.

We say that we accept everyone, regardless of our differences, yet we reject anyone that doesn’t think as progressively as ourselves.

The Patriot Prayer group was immediately labeled as a white supremacist, alt-right group, despite numerous statements from Gibson refuting these claims, and even the glaring evidence in the form of Gibson himself, who is Japanese American.

It’s ironic that Gibson in some ways seems to be more accepting than the liberals who pushed for his rally to be canceled.

He publicly denounced alt-right and white supremacist groups, saying he had no interest in their support at his rallies. He claims that Patriot Prayer welcomes “moderates” of both political groups.

He also ultimately made the responsible choice to cancel the protest when concerns arose regarding the sheer number of counter-protesters planning to attend.

The events that occurred the past weekend portrayed us in a bad light.

As liberals, progressives, and Democrats, it’s up to us to show the nation that we are on the right side of history, by listening, even if we don’t agree.

Listening is one of the most direct ways to create peace and unity. I’m not saying that racist hate speech has any place in our nation, but if we listen, acknowledge, and then refute, we at least have shown that we as a collective group are willing to give others a chance to speak their minds without fear of oppression. Is that not the very premise of liberalism itself?

Everyone has the right to speak their minds, and if we create a community that is willing to listen, even when it goes against everything we stand for, then maybe we’ll be able to change some minds.