Living on the edge of forgetting something important 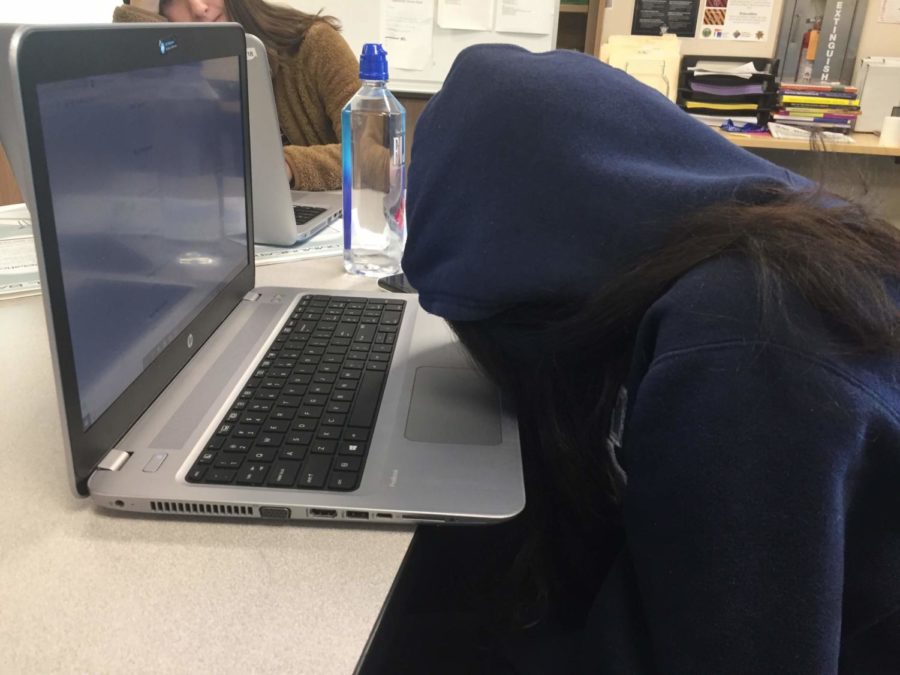 We’ve all had one of those days.

You roll out of bed and head to school. Suddenly, you realize that you completely forgot to finish your math homework. You scramble to complete it before the class period starts.

Later that day, you catch yourself staring out the window and spacing out. You shift your attention back to the class subject but soon find your attention wandering once more.

At home, you’re completing your homework, but you find yourself falling into the internet rabbit hole. You completely lose track of time and soon you find yourself at 9 p.m. with barely any homework done at all. You decide to keep working, but your brain feels lifeless.

For Walker Spencer*, these are everyday challenges. This is due to his Attention-Deficit/Hyperactivity Disorder, otherwise known as ADHD.

According to the American Professional Society of ADHD and Related Disorders, ADHD is a neurobiologically-based developmental disability affecting around 11 percent of children. No one knows exactly what causes ADHD; however, scientific evidence suggests that the disorder is genetically transmitted.

For Walker Spencer, this seems to be true, as his dad, Frederick Spencer*, also has ADHD. It has also been found that ADHD results from a chemical imbalance in certain neurotransmitters, which are chemicals that help the brain regulate behavior.

According to the Anxiety and Depression Association of America, people with ADHD are more likely to suffer from anxiety, depression, bipolar disorder, substance abuse, and sleep disorders in addition to attention deficiency. People with ADHD also have difficulty with executive functioning, including organizational skills and time management.

ADHD occurs in both boys and girls. However, according to ADDitude, ADHD is three times more likely to occur in boys than in girls.

The disorder presents itself differently for each sex. For boys, symptoms often include more external behaviors such as aggression and acting out. However, for girls, the symptoms are frequently overlooked due to the fact that they are not as apparent, and include verbal aggression and daydreaming. Nevertheless, both sexes experience noticeable inattentiveness which can cause trouble completing schoolwork and other activities.

For many, the diagnosis comes at an early age. Walker Spencer’s family started noticing there was something different about their child when he was young.

“He didn’t always respond to his name. We had to try repeatedly to get his attention if he was engaged in something he found interesting,” said Terri Spencer*, Walker Spencer’s mother. “When sent to do something simple like getting dressed in the morning, he would get distracted and end up on the floor, still in pajamas, reading a book.”

There are effective treatments to improve focus for those suffering from ADHD. According to the Centers for Disease Control and Prevention, the recommended treatment is a combination of therapy and medication. The types of medication for treating ADHD vary and include stimulants such as Ritalin, Adderall, and Concerta.

Walker Spencer takes Concerta, which helps him focus throughout the day.

“I think that without the medication, I would forget just about everything and be constantly getting sidetracked,” Walker Spencer said.

Despite the benefits, the medication causes some negative side effects. One of the side effects Walker Spencer frequently experiences is a decreased appetite, which has led to him being thinner than the average teenager his age.

Furthermore, due to his medication, he frequently finds it difficult to get to sleep at night.

“I often go to bed at around 10:30 p.m., but then I just lie in bed for an hour or more just trying to fall asleep. But the next morning, when I need to get up for school, it’s really hard because sometimes I’ve stayed up until 11:30 p.m. or midnight,” Walker Spencer said.

Despite the challenges of inattention and the side effects of the medication, there is an “upside” to having ADHD known as hyperfocus.

However, hyperfocus is a disputed symptom because there is currently no sufficient medical evidence that it exists. Moreover, according to Healthline, hyperfocus is not reported by everyone with ADHD.

”Sometimes when I’m really into something or doing something that I find interesting, I completely lose a sense of time and everything else going on in the world,” Walker Spencer said. “I am able to focus intently on that activity for hours.”

Unfortunately, other people can view the “inconsistent focus” found in people with ADHD in a negative light. People with ADHD are often labeled as lazy due to the fact that they can excel at one subject or activity but appear unmotivated in another. This inconsistency in focus is confusing to many people.

“When I was in middle and high school, my teachers saw I could work hard on some things but had a hard time completing other assignments or projects,” Frederick Spencer said. “They literally called me lazy because they thought I was [purposefully] not putting in the effort they saw I was capable of into other subjects.”

Despite the tendency for people with ADHD to be hindered by their inattentiveness, people with ADHD can still be successful. Frederick Spencer attended two of the leading colleges in the country and received advanced degrees in mechanical engineering despite not having a diagnosis or medication of any kind.

“Once I got to college, particularly graduate school, the level of demand was much higher. This had the effect of pumping adrenaline in my system, which, being a natural stimulant, helps a lot with ADHD. Despite this help, the challenge was to manage the pace for longer-term projects like research papers or thesis writing,” Frederick Spencer said.

Some high-profile celebrities have been very open about their ADHD, including music stars Justin Timberlake and Adam Levine, movie star Ryan Gosling, and astronaut Scott Kelly.

Many people can automatically assume a person is being rude or doesn’t care if they see the person spacing out. However, what they can fail to properly recognize is that the action they are interpreting as rude may not be the fault of the person; the person might merely be suffering from ADHD.

Few people outside the medical and educational fields understand how broadly ADHD affects the people who suffer from it.

“Those of us who don’t have ADHD take for granted the ability to sustain attention to things we need to do or be aware of time. But for people with ADHD, the inability to pay attention and stay organized can impact many areas of their lives,” Terri Spencer said.