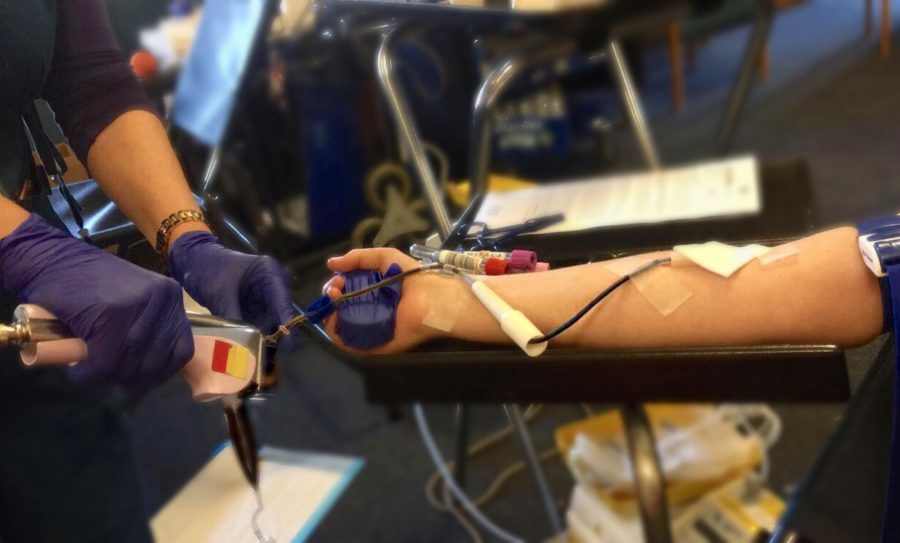 Jane Doe*, one of the few donors at the Redwood City blood drive, hold out her arm as a nurse collects her blood.

Blood donor turnout is too low.

In partnership with the Blood Centers of the Pacific, the Redwood City Public Library hosted a blood drive open to any community member over age 15.

But only ten percent of eligible donors showed up on April 24 despite the fact that blood is always in high demand.

“There is no substitute for human blood. If patients lose blood from surgery or injury or if their bodies can’t produce enough, there is only one place to turn—volunteer blood donors,”  Blood Centers of the Pacific stated on their website.

Still, many were discouraged from donating.

Mary Wilson*, who has type O negative blood—which can be accepted by any person regardless of their own blood type—feels deterred from donating due to prior experiences.

“The last three times I went [to donate blood], they told me that my iron levels were too low,” Wilson* said. “They treated me like a second-class citizen after I was unable to donate and I felt embarrassed. Now I don’t even  want to go back.”

Lack of advertisement could also contribute to the low donor turnout. Knowledge of the event seemed limited.

“I donate when I’m asked to,” Gordon Glasson, a frequent donor, said. “I get an email when it’s time for me to donate again. But I wouldn’t have known about it [the blood drive] otherwise.”

According to the Blood Center of the Pacific website, white males over the age of 30 make up the largest percentage of donors. The blood center is looking to expand these demographics.

“I learned about the drive on Twitter,” Jane Doe*, 16-year-old said. “I think the use of social media to get more people involved is very effective especially among younger people.”

Teenage donors are eager to contribute.

“When I donated blood a few weeks ago, I had an enjoyable experience. It feels really good to know that I saved three lives,” sophomore Isabella Mattioli said. “I’m looking to donate again as soon as I’m eligible.”

According to California standards, donors must wait eight weeks before they can donate again.

To meet the constant need for blood and to provide convenient times for donors, the Blood Center of the Pacific hosts blood drives around the Bay Area daily. Potential donors can find drives and eligibility information on their website.

In the future, the center hopes for higher donor turnout. Donors attest to the positive feeling that comes with giving blood and the blood center hopes that this sentiment is translated to a larger audience.

“If I ever needed blood I hope it would be available to me,” Glasson said. “I’m proud that I’m giving blood to someone else in the world in need.”

*Names have been changed to protect  the donors’ anonymity.