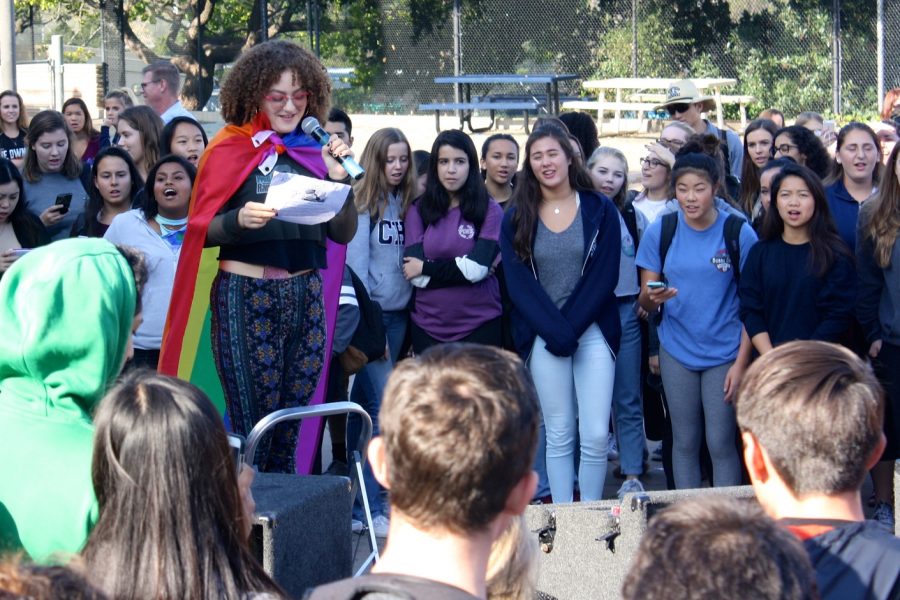 Students crowded around junior Rosie Asmar as she introduced the rally.

Students flooded out of classrooms and down flights of stairs.

Approximately 300 students gathered around the girl in the rainbow cape.

“My body, my choice!” yelled the girls.

“Her body, her choice!” chanted the boys.

At 1:30 p.m. on Monday, Nov. 14, in support of a pro-love rally after the recent political upheaval brought on by the election of president-elect Donald Trump and vice president-elect Mike Pence, 300 to 400 students walked out of their 5th-period classes and filled the quad.

The goal of students was to promote unity after the election split the nation into those who support and those who oppose Trump.

“I really wanted to stress the non-violence of the protest. It was important to me that people understood that the rally was not anti-Trump but pro-love,” said junior Rosie Asmar, one of the coordinators of this event.

Administration allowed the walk-out after Asmar and several others expressed their feelings regarding the election and emphasized the fact that it would be a peaceful rally. Students attending the rally were not penalized in regards to attendance.

“The students should have the right to decide whether or not they want to protest. Today, leaving class was counted as an absence [as opposed to an unexcused cut] because the students are still on campus. As soon as someone leaves campus, they will be marked as a cut,” said Principal Ralph Crame.

Though for some, walking out to support the rally was fairly easy, for others, leaving posed more of a challenge.

Freshman Alexa Fovenyessy said, “Our class was told it was counted as a cut, but it was easy to leave class because it was a good enough reason to come out and see others’ opinions on the issue.”

During the peaceful protest, students shared their opinions through chants, songs, poems, prose, and speeches.

“I’m here to show my support for the ‘Black Lives Matter’ movement and to show that [young people] have a say in the election,” said senior Ashley Maxwell.

For some, the purpose of the rally was unclear while it was being planned.

“At first, I didn’t understand the purpose of the protest, but I was still very supportive of the students. It wasn’t until [sophomore Bella Romero] explained it beautifully during class that I fully understood and became very proud of what they were working for. Exercising the right to assemble is the most significant manifestation of our democracy,” said English teacher Joseph Hill.

Some questioned the significance of the rally beyond Carlmont’s campus and the impact it will have on a larger scale.

“I want to believe that this has an effect on society, but the skeptic in me says it won’t, and I hate that. These sorts of things are great, but this momentum will die out,” said activities director Jim Kelly.

For others, however, the rally made them feel supported and loved.

“I could never have imagined so many people would show up. I love and appreciate everyone who did,” said Asmar.

The organizers believed the walk-out would receive support, but the actual results astounded them.

Sophomore Gwen Stevens said, “I did think people would be scared to come out and support us, so it’s so amazing to see the turnout and all the people that came.”

For sophomore Marina Stoilova, the results hit home when she realized the difference between Carlmont and her previous school.

“There’s such a stark contrast between here and the East Coast; everyone here is so accepting of different cultures and people. We expected around 30 to 40 people to show up, but the attendance shows how progressive our school actually is,” she said.

In the end, for many students and faculty who decided to walk out, the resulting peaceful protest was a success in creating a sense of unity in the community.

“It was inspiring to see students assembling to voice their opinions and wanting to share their views. We have a great group of students here,” said Administrative Vice Principal Grant Steunenberg.