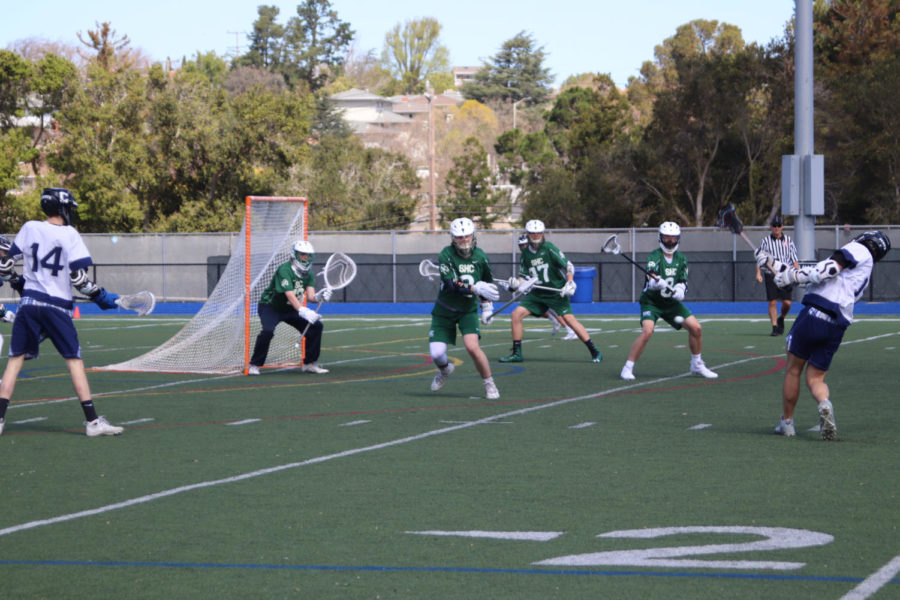 The Scots’ large deficit is a little misleading as they got off to a quick start taking a 1-0 lead less than two minutes in with a goal by attackman Adrian Cunningham, a senior. The Scots’ lead did not hold for long as SHCP scored on the ensuing face-off and then scored again two minutes later, putting them up 2-1 with 7:23 remaining in the first quarter.

The next few minutes were a stalemate between the teams, neither making any progress until SHCP scored a goal with 5:33 left in the first.

However, two penalties resulted in the nullification of the goal; one on Carlmont, one on SHCP, the latter resulting in the stoppage of play.

The revocation didn’t rattle the Fightin’ Irish, who put themselves up 3-1 after capitalizing on the Scots inability to pick up the ball after goalie Shuaib Khan, a junior, saved a goal.

The Scots got right back into it on a goal by Ralph Holmes, a senior, who plays midfield (“middie”), closing the gap to one.

“Passing into a shot is one thing we struggle on, especially with movement and D poles in the middle. I think our shooting is there, especially with our outside shooters and we need to get them the ball,” Cunningham said.

The Fightin’ Irish weren’t fazed and went right back up two just before the end of the quarter.

The second quarter began a lot slower than the first with the Scots and Fightin’ Irish trading a goal apiece before Holmes scored once more, putting the score at 5-4 with the Scots trailing 4:22 before halftime.

The Fightin’ Irish proceeded to score two more goals, despite Khan’s outstanding effort saving around five shots in a row.

Holmes scored his third goal for the Scots with 1:10 left in the half, and the Scots went into the half trailing 7-5.

What was a close game quickly became a massacre of the Scots. The Fightin’ Irish turned this into a one-sided game after scoring six consecutive goals in less than six minutes, extending their lead to 13-5.

The Scots defensive woes were coupled with a surplus of turnovers on the offensive side, hindering their ability to score.

“We need to start throwing and catching better to reduce the number of turnovers,” said middie JJ Leavitt, a sophomore.

The Scots pulled things back together for the remainder of the third, but an excellent defensive effort by the Fightin’ Irish and their goalie kept the Scots from scoring until the fourth quarter, where Leavitt ripped one into the goal cutting the deficit to 13-6.

The Scots did not make any more progress and ended the game down 11.

“Our team played well in the first half, and for whatever reason, they just didn’t come out in the second half ready to play,” said head coach Todd Irwin.

Turnovers weren’t the only thing stopping the Scots from scoring. The team struggled with securing passes and picking up ground balls, which in turn led to turnovers.

Overall, the Scots’ performance was not desirable, but the loss was not without hope for the future.

“The team is doing okay, but where we’re lacking is in the effort on ground balls and being more aggressive on defense,” coach Irwin said.