Lunar New Year Extravaganza welcomes the Year of the Pig 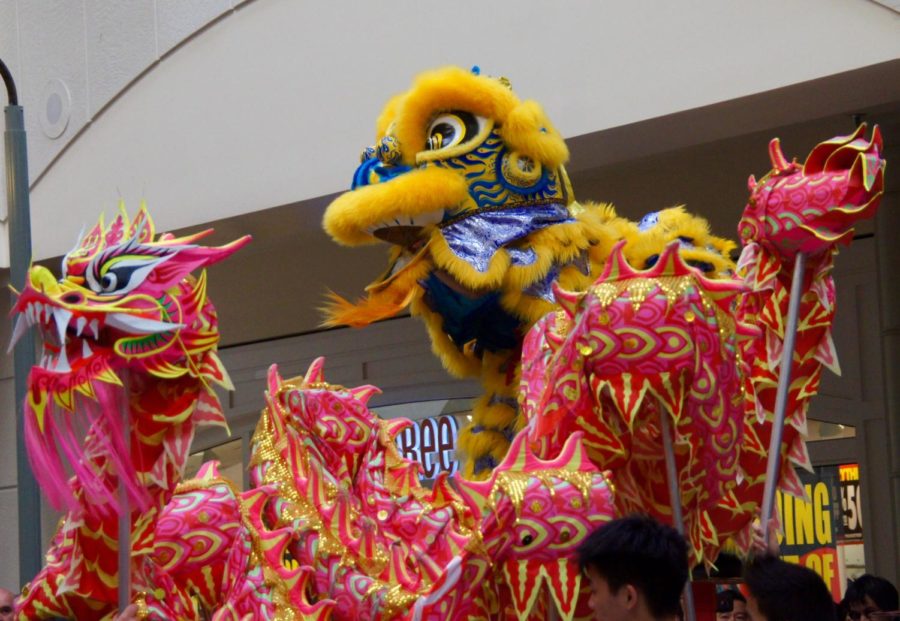 Teenagers from LionDanceME perform the finale of the lion and dragon dance.

It is almost the Year of the Pig. But at the Hillsdale Shopping Center, the celebration already started on Jan. 26, a few weeks before the Lunar New Year.

Lunar New Year is an eastern Asian festival that marks the start of the new year according to the traditional Chinese calendar. The Lunar New Year celebration usually consists of 11 days of festivities, which includes visiting loved ones and preparing for the new year. This year, the celebration begins on Feb. 5 and ends on Feb. 15th.

At the Hillsdale Shopping Center, a large crowd gathered in the area in front of Macy’s to see exciting performances by the local youth.

“It’s an event that everyone can enjoy, and everyone is so excited about all of the different dancers,” said Milla Khano, the marketing director at the Hillsdale Shopping Center.

The young performers came from several different dance and martial arts studios from the Bay Area.

“[The students] have been practicing this set for about two months now … Some of the students have been at Z-Ultimate for almost 10 years, and they usually come three times a week to practice as a group,” said Timothy Carmon, an instructor at Z-Ultimate Self Defence Studios in San Mateo.

A short break followed the martial arts demonstration. Then, suddenly there was a loud banging of percussion. Everyone turned in the direction of the Apple store, where two lion dancers and a dragon dancer were making their way towards the stage.

The elaborate lion and dragon dance was performed by a group of teenagers from the LionDanceME company. It was founded by Norman Lau in 2012 and turns the tradition of lion dancing into entertainment.

When the dancers reached the stage, the dragon weaved in and out, performing a complex dance. Next, the lion dancers started a routine known as the Jong, where the dancers performed stunts while balancing on posts that were up to 8 feet off the ground.

Bradian Wong, who has been lion dancing for about a year and a half, said, “I’m really glad that our set went off without a flaw … We’ve only been practicing this set for about a month now.”

After both lion dancers finished their respective Jong routines, the dragon dancers returned for the grand finale.

There were several performances from different dance studios as well, including one from the award-winning Jane Huang Dance Academy. The academy teaches professional ballet and other forms of dance to kids ages 4 to 12.

First, they performed a ballet routine to the popular Chinese children’s song “Where is the Spring.” Following that was Michelle Ahl who sang “The Bejing Opera: Pear Flower.”

“I’ve been dancing since I was 4 … We haven’t practiced for this [routine] for very long, maybe just over a month,” Ahl said.

The Lunar New Year Festival at the Hillsdale Shopping Center brought the community together to celebrate the start of the Year of the Pig.

Khano said, “We set up this event because of how popular Lunar New Year is in the Bay Area, especially with the large Asian demographic that we have.”