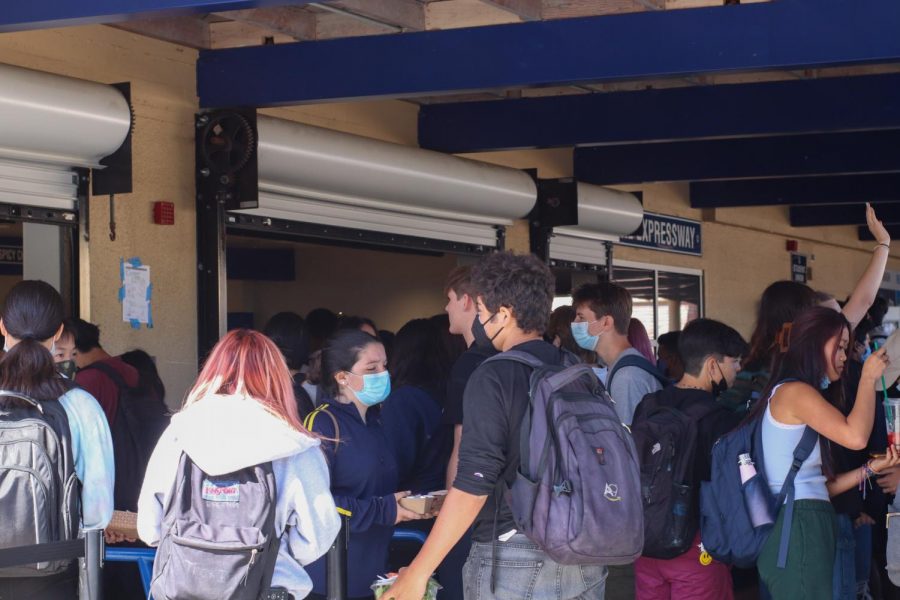 Carlmont students rush to the lunch line, creating huge crowds despite restrictions imposed by the administration. "It's just really inconvenient for everybody,” said Zelia LaPlaca, a sophomore.

A swarming sea of students was filled with the feeling of endless waiting — a phenomenon known as the Carlmont lunch line.

Since the beginning of school, more students have been getting lunch from the cafeteria for various reasons. It’s free this year, it’s more convenient, and there’s no need to bring lunch from home. However, the repercussions of this trend can be seen in the length of lunch lines and the extent to which they are filled.

According to a survey of 100 Carlmont students, most people don’t feel like the lunch lines are safe, mainly due to the COVID-19 pandemic, as there are too many people crowded in a tiny area.

Zelia LaPlaca, a sophomore who chooses to get school lunch, isn’t satisfied with how lunch is being served. She also thinks that it isn’t organized very well.

“Everybody’s so close together because there are so many people in such a small space. I feel like everyone’s just like breathing down my neck the entire time,” LaPlaca said.

She believes that there is too small a space and too many people to fit into it. She also noticed the inconvenience that it had posed for 65% of surveyed students. Many of the survey’s respondents mentioned that they could not walk past the lines or pass them or that crowding was terrible. However, she did have a solution for the problem.

“[They should give grades different time slots] or just something like that so that there are less people all in one place at one time,” LaPlaca said.

Even for those who choose not to pick up the free lunch, it’s still a massive inconvenience.

Areg Horoupian, a junior, has to walk from the S-Hall every day to get to where he eats lunch, which means two things: passing through the lines or taking a detour.

“The lunch line, for me at least, … serves as an obstacle, so it’s really hard to navigate,” Horoupian said.

However, he does feel it to be necessary, despite the trouble.

“People need lunch. They can’t make their lunch at home, so they have to get it there.  But for me, it just serves as an obstacle to getting to where I need to go,” Horoupian said.

Nonetheless, Horoupian does not have much concern about COVID-19, regardless of the number of people or distance. For Horoupian, he is comfortable as everyone wears their masks.

Furthermore, 92.4% of San Mateo County residents 12 years old and older have been vaccinated according to SMC Health. As a result, Horoupian feels more assured of his safety with such high vaccination rates.

“I think it’s pretty decent with the COVID rules, although there are a lot of people,” Horoupian said.

He also thought of some other ways that the school could improve the lunch line situation.

“[Line dividers] would work so much better than crowding everybody together and putting tape on the floor,” Horoupian said.

Other Carlmont students who took a survey about the lunch lines also had additional suggestions. One suggested that the menus be announced on Canvas for the week; two indicated that lunch could be served in places different than the Student Union. Another suggested that there could be more than just two lines to make the process of picking up food faster.

There is a light at the end of the tunnel, though. According to Administrative Vice-Principal Gregg Patner, the school has been working hard to control the crowded lunch lines.

“We have made adjustments by having all food offered in all lines. We have managed the flow of traffic by displacing lines and have added four student volunteers daily as well as hiring two more staff to distribute,” Patner said.

However, according to Patner, changes such as having lunch in more than one location aren’t possible for many reasons, even though the administration had considered it.

Patner expressed his opinion that the lines were running smoothly and added that the lines often looked more intimidating than they were, especially at the beginning of lunch.

“While the lines may look imposing, … have a little patience,” Patner said.

Even with the buildup with students at the beginning of lunch, the school cafeteria staff has so far been able to serve lunch to all who needed it by noon.

Regardless of the success of the lunch staff, most Carlmont students are not content with the lines, especially amidst the ongoing pandemic. Even if lines do start to lighten up and become more accessible, it is still essential to watch out and stay safe.