Making the case against libertarianism 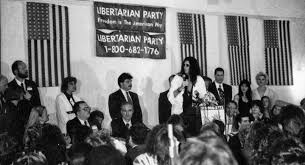 As of now, libertarianism is a hot topic. The party promises freedom and minimal government, but is that really a good thing?

Over 4 million Americans voted for the Libertarian Party candidate Gary Johnson in the 2016 election.

In comparison with past third-party candidates, those numbers are quite impressive. Johnson’s performance shows that Americans are hungry for something outside of the standard two-party choices. Libertarianism is a rising fad, but many still do not know quite what it is.

At the heart of the libertarian platform is the latin root “liber,” meaning “freedom from oppression.” The ideology consists of minimal government intervention and individualism in the most extreme of ways.

The great strength of this political ideology rests in its social philosophy.  The platform supports LGBTQ rights, is pro-choice, and believes that all drugs should be legalized. As American citizens, libertarians say we have the right to choose our lifestyle, as long as we do not cause others harm in the progress.

But where libertarianism fails is in its fiscal policy. The platform relies on “laissez-faire” principles popularized in 18th-century France.

“Laissez-faire” roughly translates to “let them be.” This means that businesses shall be free of any government involvement or intervention. This means no taxation, no minimum wage, and no oversight. The ultimate liberation.

This radical individualism sounds idealistic and lovely, yet it goes against the fundamental principles of human nature.

James Madison stated that “if men were angels, no government would be necessary.” Human nature has proven to be one of greed when left to its own devices, and with libertarianism, the lack of control on our citizens shall lead to the priority of self over the benefit of the country.

One of the great Confucian philosophers, Hsün Tzu, wrote that humans lack an internal moral compass, and when left to their own devices fall into chaos and despair. That foundational flaw in our existence is the reason we need government in the first place: to tame societies demons and establish order.

The problem with libertarianism is that it assumes humans will do the right thing, while the best form of government is one that assumes the worst in people. That is why we are a democratic republic. We need some level of control. We need to be protected from ourselves.