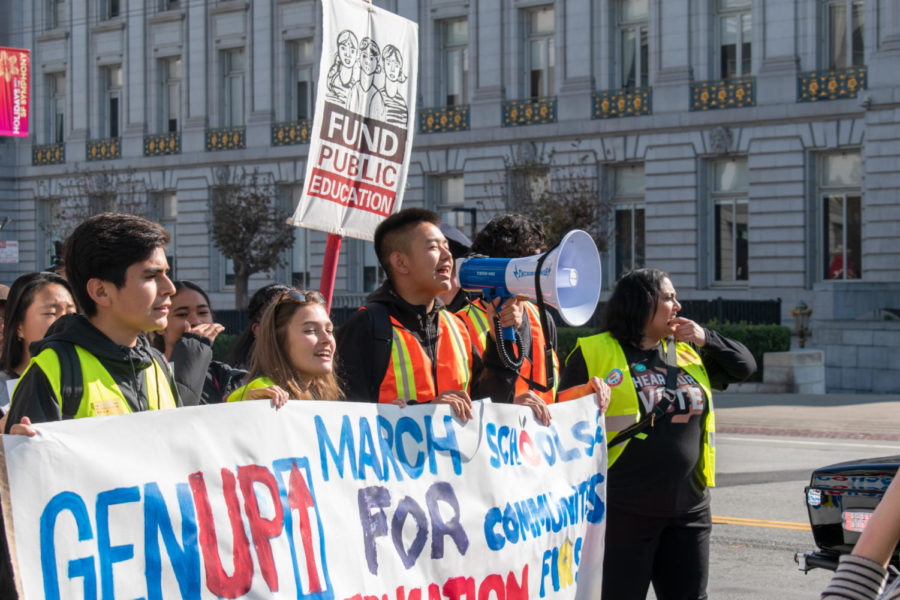 Bay Area students who believe enough isn’t being done to support the education system are eager to close the gap.

Social justice organization GenUp is student-led and aims to ensure all student concerns are addressed. On Nov. 9, the group held several March for Education rallies throughout the Bay Area.

According to GenUP, “the education system here in California has been left in the dust for far too long. Teachers and students are bearing the brunt of the consequences.”

One of GenUP’s main concerns revolves around how funding is allocated throughout the state. According to the University of California (UC), California’s state corrections system was allocated more funding than the UC and California State University system in 2015.

Although K-12 schools are given significantly more of the state budget, 18 other states allocate more funding per individual student, according to a recent study by the National Education Association.

“Corporations have not paid their fair share of taxes for too long,” said Alvin Lee, the founder of GenUp. “In 2020, we’re going to turn out the youth vote, get schools and communities on the first path, and hold corporations accountable.”

With the constraints of local real estate prices, many teachers cannot afford to live near where they work. Many schools have outdated and failing infrastructure, as well as departments that are entirely reliant on donations from students’ families and sponsors.

Carlmont isn’t exempt from this phenomenon. The Carlmont Academic Foundation donated $788,599 during the 2018-19 school year. These funds were distributed among 17 classes, helping to reduce class sizes and improve infrastructure.

“Furthermore, our teachers and professors, people who do one of the toughest jobs, are not getting paid nearly enough for what they do,” said Jessica Riestra, the state director of March For Our Lives California.

Rallies aren’t the only way GenUp is raising awareness about the issue. They also maintain several affiliations with other influential groups and communities, such as March For Our Lives.

“Education is a human right; that is why we have to fight,” chanted the group.