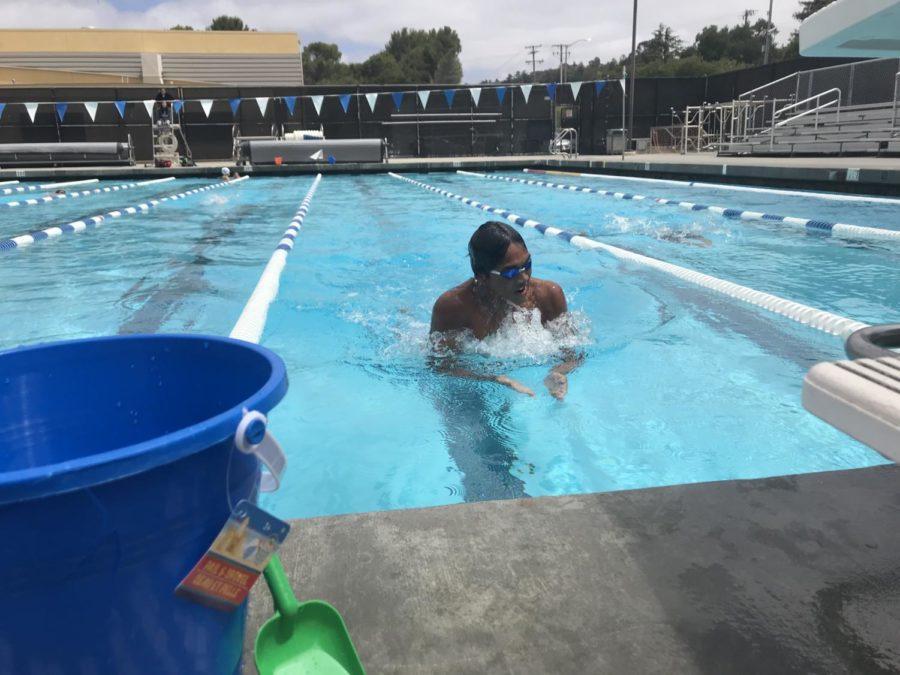 Josh Camerino, a senior, races his siblings amidst the Swim a Thon.

The Carlmont community suffered a loss recently with the passing of Clara Tao — a beloved community member and parent of Carlmont alumni.

Clara Tao, as a USA swimming official, helped the Carlmont swim team by overseeing the team’s meets throughout several high school seasons in the past. Her absence was felt by the entirety of the swim team this past season; in every competition, from dual meets to PALS, swimmers wrote the initials “CT” in Sharpie on themselves and shouted her name during cheers.

“It was very important to me to make this scholarship centered around character,” Margolis said. “Hence, there is no GPA requirement. The only requirement is to be a senior swimmer on the high school team.”

“I feel good about it, but I am also kind of sad about it in a way too,” Tao said. “They asked for my permission, and I said, ‘yeah, of course.’ It’s a very good thing.”

The Swim-a-Thon brought a variety of people to the pool deck, from young children to graduating seniors to parents within the swimming community. Those present treated the event not as a somber occasion, but rather as an opportunity to support those involved.

“I think it’s for a really good cause, and I’m really proud of my friend [Margolis] who set it up,” said Madison Fong, a senior who applied for the scholarship. “I’m here to show my support for the high school swim team. I want to support the family and [Margolis].”

Fred Farley, head coach of the Otters Swim Club and varsity coach of the Carlmont Swim Team, has known Clara Tao for ten years and was also present for the duration of the Swim-a-Thon.

Farley said, “[Clara Tao] was a very influential and involved parent in swimming for those 10 years. I think this is a good way to commemorate her actions and deeds for the swimming community.”

At the end of the day, participants swam a total of almost 700 pool lengths — around 11 miles — in the Swim-a-Thon. Their efforts brought in a total of $1,900 to fund the $1,000 Memorial Scholarship. The funds will be matched due to a generous donation from community member Steven Rogers, allowing the scholarship program to continue for at least another four years.

The Clara Tao Memorial Scholarship, in combination with the recent Swim-a-Thon, has encouraged community members to keep Clara Tao close to their hearts.

“In making this scholarship, I hope high school swimmers will continue to remember Mrs. Tao, her generosity and warmth, and be inspired to act the same way; it is important to be recognized for a kindness that is not found often in people,” Margolis said.