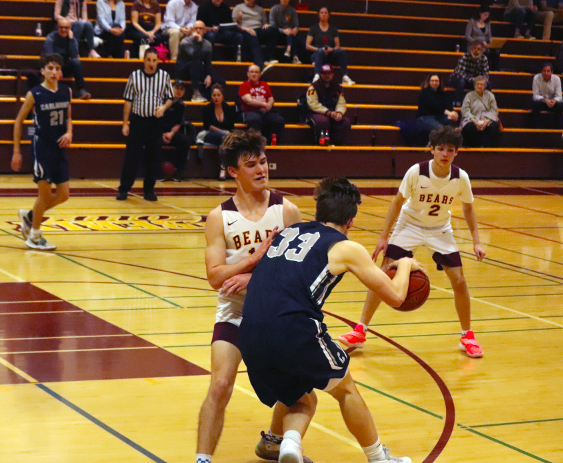 Sophomore Tripp Garrish backs down his defender on the perimeter.

Many basketball fans in the Bay Area know what it’s like to watch a crippled version of their team lose one of the most important games of the season. Similarly to the Golden State Warriors, without their starting lineup at full power, the Carlmont Scots fell to the Menlo-Atherton (M-A) Bears, 58-36.

Led by Connor Cadigan, the Bears pulled ahead in the second quarter and kept adding to their lead until they finished with an uneventful fourth quarter. The Scots were able to play a strong defensive game but collapsed when taking the basketball up the court.

“When you play a team like M-A, they like to speed you up with the press, so we needed to take our time once we got past halfcourt to let time run off the clock a little,” said James Jewettt, the Carlmont JV head coach. “We were just shooting too quick because we couldn’t slow it down.”

A full-court press is when one team plays man-to-man defense on the other team’s half of the court, preventing them from quickly bringing the basketball into scoring range. M-A would present Carlmont with their full-court press for a large part of the game.

In the first quarter, the Scots were able to maintain a close 10-10 score until a last-minute run by the Bears. The Bears’ run was able to send them into the second quarter with a 18-10 lead. Multiple Carlmont players would get into foul trouble, creating even more of a need for the other players to step in.

“With Hunter, Jono, Brady, and Trent all out, we had to compensate for that with our energy and drive, which was way higher than usual,” said Geoffery Wang, a sophomore.

Even with Carlmont moving a junior from varsity to JV, Jonathan Su, they still struggled with keeping enough experienced players on the court at the same time. When the few remaining sophomores like Tripp Garrish and David Su both got into foul trouble, Jewett brought in some of the newer players.

“When you’re trying to fill in with young guys, you kind of get out of rhythm. Kids lose their way, but as long as they play hard, that’s all you can ask for,” Jewett said.

In the eyes of Nick Fogel, M-A’s head coach, all of his players did well that night, but one performed above the rest.

“We looked at the scorecard from last game, and seventy points were way too many, so we worked to limit second-chance opportunities, and I think Connor Cadigan really did that for us tonight,” Fogel said.

Despite only playing two quarters, Cadigan dominated on both ends of the court, holding the Scots to only six points in the second quarter. On top of his defensive play, Cadigan scored 24 points in his two quarters with no personal fouls.

M-A hopes to keep the momentum going with games against Hillsdale and Sequoia coming up next week. Carlmont hopes to stabilize this upcoming week, playing against Capuchino and Woodside, where they are favored to win both games.

When asked how Carlmont plans to move on to the next game, Jewett responded, “Go to the weight room. Don’t put a ball in their hands. Just let them get away from playing basketball for a day, and then come back in on Monday and get ready for the game on Wednesday.”