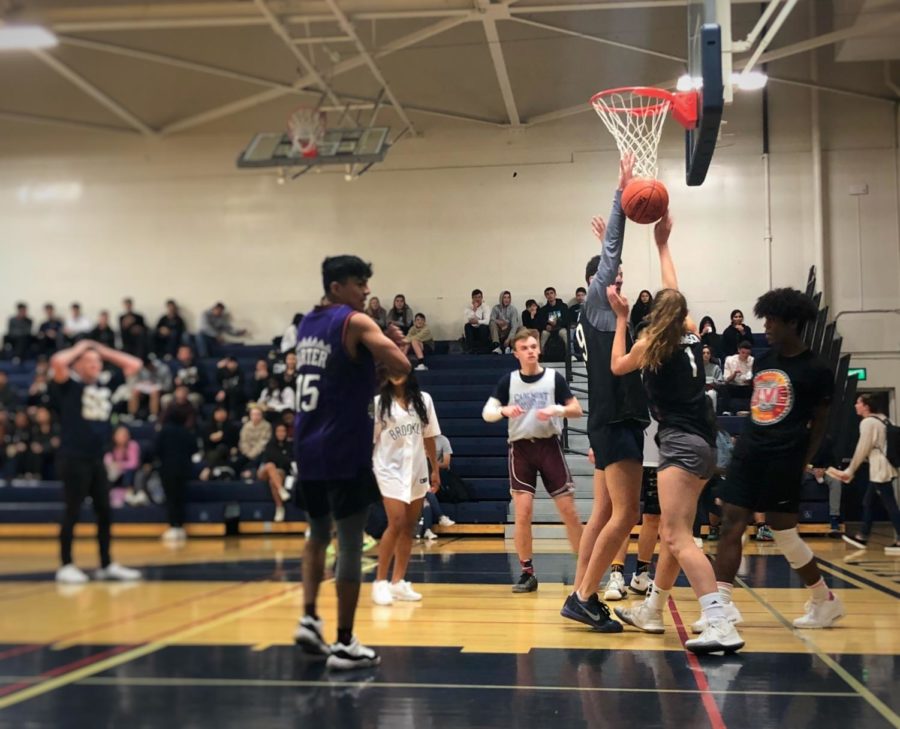 Junior Catherine Dahlberg attempts to shoot a basket for the junior team during one of the many games played in Mini Madness.

With the month of March coming to end, ASB holds their annual Mini Madness basketball tournament in order to bring the spirit of March Madness to Carlmont and provide all students with an opportunity to get involved.

This year, Mini Madness was held March 18–22 every day in the Stogner Gym during lunch.

Mini Madness is a school-wide activity put together by ASB meant to be a Carlmont spin-off of March Madness. The activity is essentially a basketball tournament, where students can sign-up to participate and play for the team of their corresponding game.

Jono Sison, a freshman and member of ASB, said, “A lot of planning went into this activity. A basketball tournament comes with excitement, and much of the planning had to do with containing the crowd, making sure nothing spiraled out of control. This year, the students were more involved and spirited than ever, even I found myself getting so excited that I was running on the court in the middle of the game.”

In the tournament, there was a total of four games played between all of the grade levels, as well as a fifth game that was played between the winners of the bracket and the Carlmont staff.

The first game was played between freshmen and juniors, which ended in a close game with the junior team winning by two points. The second game was seniors vs. sophomores, resulting in a blowout win for the seniors.

Finally, the last game was played between the seniors and the Carlmont staff, which was one of the most attended games in the tournament. The staff ended up teaching the seniors a lesson with a crushing win, 20 to 33.

Junior Anson Fong said, “Playing in Mini Madness was definitely one of the highlights of my month. It was so much fun to play with my fellow classmates in a low-pressure environment, it was overall a great way to get involved and see everyone else get really into the games.”

This year, the student turnout was extremely large as masses of students filed into the bleachers to support and cheer on their grade level.

Nate Hsich, a freshman and member of ASB, said, “For my first Mini Madness tournament, the games were amazing to watch and seeing the huge crowd of students form was insane. The amount of people who came to watch each game during lunch really shows how spirited Carlmont actually is and is why ASB loves to do what we do.”

With events like Mini Madness, ASB aims to provide opportunities for all students to feel involved and to immerse themselves in the vast amounts of school spirit Carlmont has to offer.

“The purpose of Mini Madness is solely to have fun. The reason we put forth activities at Carlmont in the first place is to give students more options during lunch and to increase school involvement,” Sison said. “Students need breaks and time to de-stress, and tournaments and activities like these serve as a perfect opportunity to do just that. The smiles and enjoyment we see from the students during this activity only embolden us as ASB to create more activities like Mini Madness and to continue pushing the limits of student spirit.” 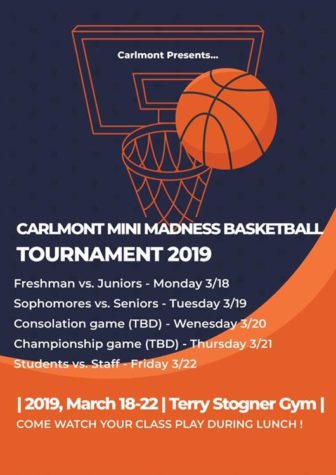