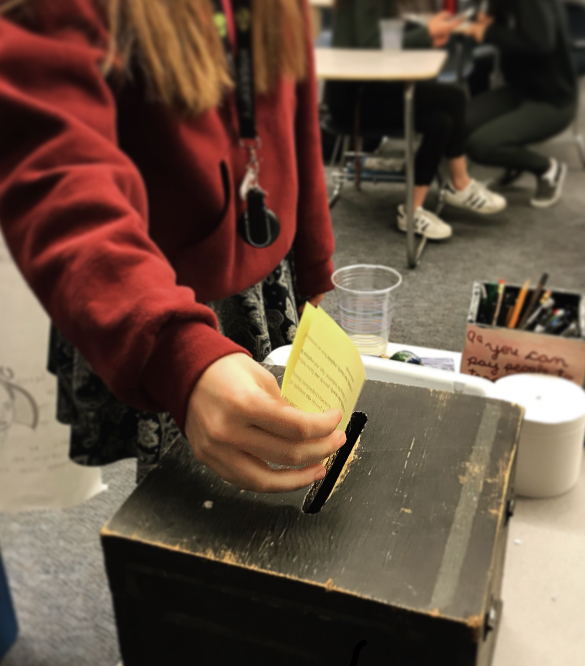 As the Mock Trial season draws to a close, the club members celebrate their successes with a potluck and new club officer elections.

Every year, the Constitutional Rights Foundation (CRF) puts out a case packet for a “criminal case” that focuses on a constitutional issue. This year, the case was called People v. Klein. The defendant, Reagan Klein, was charged with one count of making a false report of an emergency (“swatting”) and making a criminal threat.

Mock Trial has three teams working the case: two JV teams and a varsity team, each with 18 members. Each team is further split into prosecution and defense. On each side, the main positions are the four witnesses and three attorneys.

Every week, Mock Trial meets for up to six hours, practicing the case and running through full trials in scrimmages against other teams.

During these practices, Mock Trial also encourages acting and analyzing the case packet, developing new character motivations for the witnesses and new theories and angles for the attorneys.

“When we get a new case, at the very beginning we’re figuring out what happened. One year, something happened where this guy hit someone else with a walking stick, and it was really fun when we gathered all the information in the packet and acted it out. We were trying to figure out what side he would use, which hand, and we made this little movie about what happened. This year, there’s a question about how long it took to text this message. We took turns timing out how long it took to type out the whole message, and gathering data on that. It was really fun,” said Kelly Doherty, the former secretary.

The team competes in three competitions over a three-week span, with each trial running for about two hours.

The verdict does not matter at the competitions. Instead, teams are graded by independent scorers, who give points based on performance and content. The averages of these scores are compared to other schools, and the top two teams go head-to-head; one school’s defense goes against the other’s prosecution and vice versa. The winner of the county level gets to go onto state, and the winner of that gets to go onto nationals.

This year, the varsity Mock Trial team did really well, considering the competition.

“We had a pretty strong showing this year. We’re in a very competitive county, we have Menlo and Hillsdale who consistently do really well. Crystal Springs and Notre Dame are also good teams. So considering that, we got fourth place out of eight, which is not bad. We also did better against Menlo and Hillsdale than we expected to. So overall, fairly successful season,” Bazarsky said.

JV also did very well this year, making it to finals before losing.

Bazarsky, Doherty, and Alexander Derhacobian are stepping down to make way for a new group of varsity club officers. Bazarsky reflects on his accomplishments in the club.

Bazarsky was also especially proud of the out-of-school practices he arranged with other local teams.

“I tried to get as many out-of-school scrimmages as possible for the mock trial team because they are helpful for introducing them to new perspectives that they may not have heard before,” said Bazarsky.

Each prospective club officer is campaigning on one big aspect they can bring to the club, such as ASB support or more organization.

David Gomez, the faculty advisor of the club, is eager to continue advising the Mock Trial club as they continue.

“I’ve been advising this club since 1989. As long as I’m here, it’s going to keep on going. That’s also why I wanted to get Ms. Manuel [to coach JV]. I’m not going to be here forever, and when I’m gone, I want it to continue. She’s going to carry the torch,” said Gomez.

For now, Mock Trial wants to continue providing a fun experience and appreciation for the legal system.

“It’s a great experience overall, it gives people who are interested in law or improving their public speaking skills or, or acting in general, or just hanging out with interesting people. It’s an opportunity to do all that as one cohesive unit. The cases that CRF puts out each year are really interesting. The experience of being in a courtroom and actually arguing a case, the witnesses, trying to duke it out against every other school, the objections, every little possible to undermine the opposition’s case, it’s an unmatched experience,” said Bazarsky.