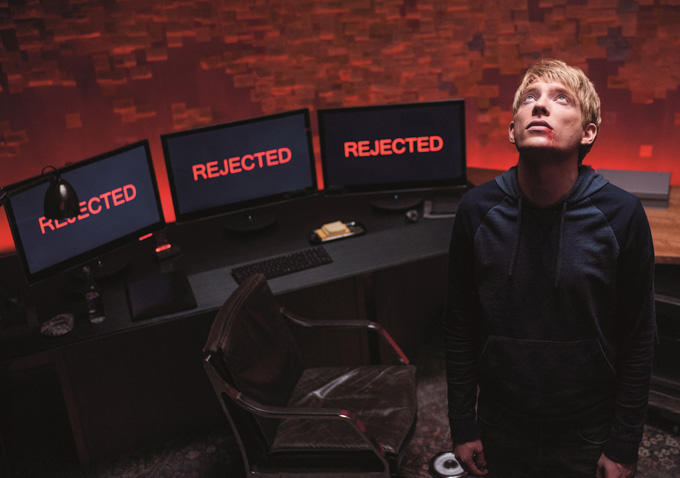 Staring toward He whom he has thwarted, Caleb (Domhnall Gleeson) wishes he could go back and fix his fatal decision.

At the juncture of Hitchcock and Orwell, a strange new form of cinema takes up residence. This horrifically poetic amalgamation goes by the name of “Ex Machina.” (R) Even the film’s title connotes the subtle ties between cultural artistry and synthetic abomination.

Deliberately programmed yet irrefutably real, “Ex Machina” catalogs the sinister story of a recluse genius who develops artificial intelligence. Inevitably, his undertaking came not without consequences.

Unhindered by modesty or moderation, the mysterious Nathan (Oscar Isaac) locked himself away in a decked out estate, ironically redolent of prison, to pursue his Frankenstein experiment.

Caleb (Domhnall Gleeson), a young man who is as green as the foliage dotting his trek to the cinder-block oasis that is the inventor’s studio, soon finds he holds the power to determine the fate of the world.

Nathan welcomes the kid to his abode, making an unexpected first impression. He is stout in stature yet muscular, bearded, and often vulgar in speech — far from the quintessential geek.

Once Caleb is informed that he will be spending a week on Nathan’s isolated estate studying a robot to determine whether she has consciousness, the two embark on an appalling exploit.

Caleb’s Turing test turns into a test of his own resilience to seduction and manipulation. And the robot isn’t the only one who’s hiding something from Caleb.

While Caleb questions the ethical implications of the project, Nathan throws back drink after drink, striving unsuccessfully to separate the worlds of science and philosophy.

The two factions butt heads in this sci-fi thriller, a tension that produces nail-biting anxiety coupled with reverent awe. It is a thin line between the beautiful and the creepy, and “Ex Machina” takes every opportunity it can to blur that line.

Artificial intelligence seems to be a prevailing topic for modern film. From “Her” to “Chappie,” it has dominated the box office. “Ex Machina” explicitly takes its stance of opposition towards the process of creating a sentient mind.

The movie commands your opinion and attention in a brutal way. It is a warning against the last invention man could ever create. And because of its colossal weight, the film spares no time on fluff. Every scene is essential and polished.

That faint intangible mystery shadowing the whole movie contributes to its impression. The uncanny valley is approached and even crossed as a man-made creature is not discernible from the live-born humans.

Sparse vibraphones escalating into ear-piercing strings shifted “Ex Machina” towards the horror film category and made each moment more gripping.

It’s witty. It’s cultured. It’s well-edited. And most of all, it’s creepy, which is more than can be said for most intentionally horror films nowadays.

Even if the film does not instill fear in your heart, it will leave you disconcerted, careful to tread down a path humans have no right to walk.

The visceral, emotional effect of “Ex Machina” is unmatched. It is something only a human mind could conceive.