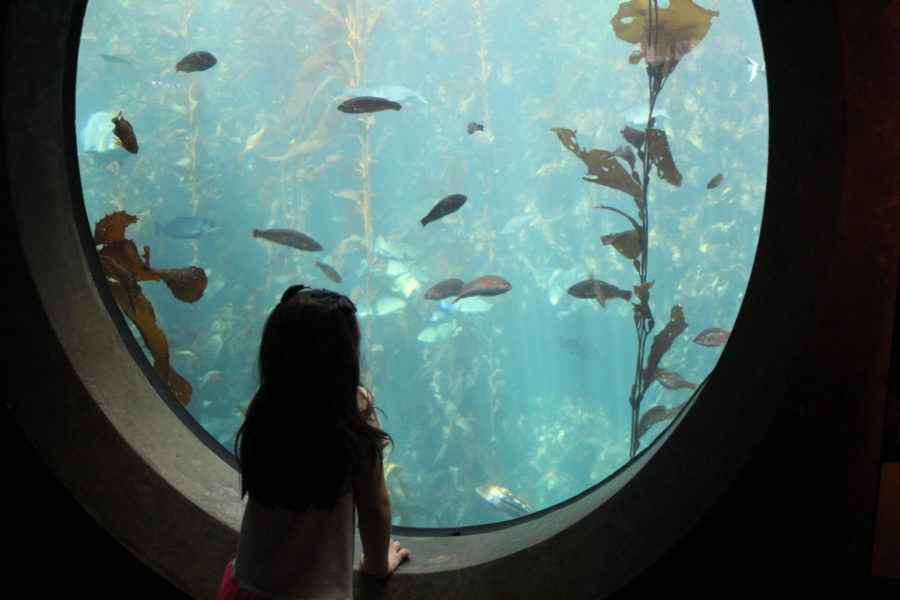 The Aquarium's concave observation windows allow kids to get close to the marine life.

“Excuse me, why did people want the whales to die?”

Curiosity may have killed the cat, but at the Monterey Bay Aquarium it could save the future of the planet.

According to its website, “the mission of the nonprofit Monterey Bay Aquarium is to inspire conservation of the ocean.”

“¡Viva Baja! Life on the Edge” is the Aquarium’s newest exhibit, which focuses on the Gulf of California (or Sea of Cortez) in Baja California, Mexico.

Mexico has been slowly building protection for Baja California for decades. The Viva Baja exhibit is a celebration of this protection and features several animals from the Gulf of California area, including terrestrial animals such as tortoises, snakes, and lizards.

The Aquarium has an Auditorium Program related to the Viva Baja walkthrough. “Journey to Baja: A Tale of Three Travelers” discusses the migration patterns of gray whales, brown pelicans, and elephant seals, all of which were endangered species until people began fighting for environmental protections.

“Baja’s marine life bounced back so quickly after being protected that the Aquarium wanted to focus on and celebrate it,” said Natalie Johnston, one of the “Journey to Baja” presenters.

One of the Aquarium’s objectives is to get people involved with ocean conservation and environmental awareness. Many of its exhibits are focused on educating children in a way that makes sense to them.

“If we get children passionate and caring when they’re young, they will continue to be invested and interested in keeping the living organisms protected and keeping ecosystems healthy,” said Michal Nozik, a Carlmont biology and chemistry teacher.

Throughout the Aquarium, little hands and faces press up against the glass, trying to get as close to the animals as possible. Children are excited to see and learn about the ocean and its creatures, and their parents are often delighted to see them do so.

“We come here so the kids will appreciate and respect the ocean and the world they live in,” said one visitor, who wishes to remain anonymous. “They’re going to grow up and be in charge of this world.”

The Aquarium welcomes questions from guests of all ages, and staff members are excited to provide answers.

“People wanted the whales’ blubber,” Johnston said to the group of children surrounding her. “But eventually the public realized they were hurting the whales and demanded change.”

The whales are just one example of how humans can influence nature in both positive and negative ways. By involving children, the Aquarium aims to protect the future of the environment.

“We as a species are very powerful, and we have an effect on other living things. It’s our responsibility, because of this power, to take care of other animals,” said Nozik.