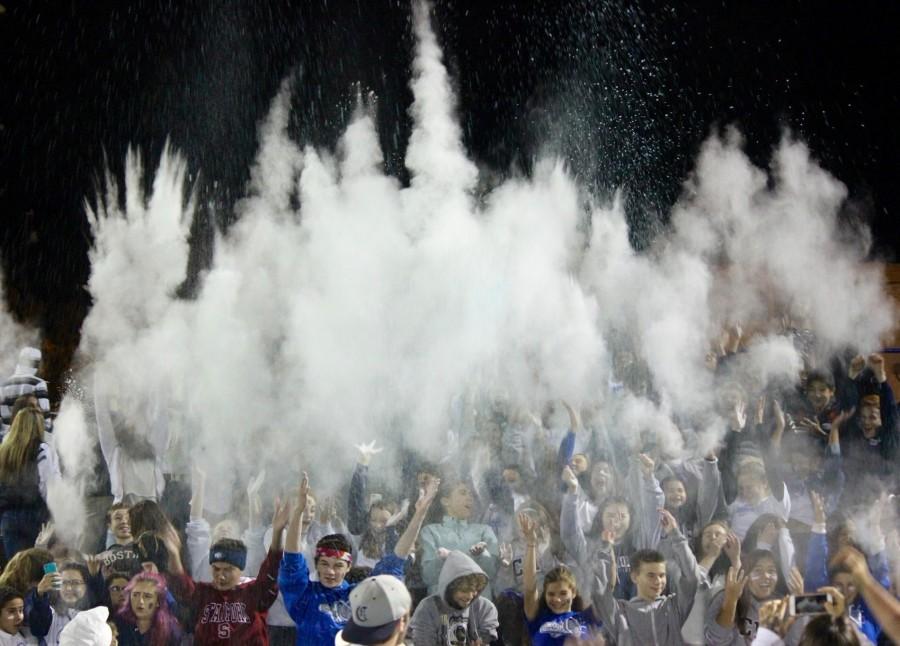 At most home football games, ASB distributes baby powder to the Screamin' Scots members to throw up during kick off.

Screamin’ Scots, dances, Valentines, Dogs in the Quad, and assemblies. ASB does it all.

From Monday March 14 to March 16, ASB conducted interviews for prospective members for the 2016-2017 school year.

Those who were interested attended a commissioner meeting on March 9. Over 100 students attended. Students had to turn in an application by 8:00 a.m. on Friday March 11.

Despite more openings due to the addition of Service Council this year, many students will not be accepted.

“This is the most applicants we ever had, about 76 this year, and I think there are a few reasons why. One, I’d like to think that people like what ASB does and would like to be a part of that, which we heard in a lot of the interviews. Two, people are understanding the importance of leadership development and being involved in school,” said ASB teacher Jim Kelly.

With the increased number of applicants, the selection process became longer for the Executive Board, which consists of 11 members.

“Spending 13-14 hours a day at Carlmont does get exhausting, but the quality of the applicants keeps me awake and excited. The application, interview, and selection process is very vigorous, but in the end it’s all worth it. We spend so many hours deciding who is the best fit for each available opening, and the competition is bigger than ever with 76 total applicants, which makes it so difficult to choose,” said ASB Vice President Spencer Stewart.

Each student had an interview, where the Executive Board asked various questions to get to know the student.

For some, this was the easy part. For others, it was frightening.

Sophomore Liz Boman said, “I was pretty nervous going into my interview because I didn’t know exactly what they would ask me, and I wasn’t very familiar with the people interviewing me. I also wanted to do well, so I was nervous that I wouldn’t know how to answer a question. But the people interviewing were very nice and made me feel comfortable, so that made me feel a lot better.”

The various events ASB held this past year inspired many students to want to be a part of the behind-the-scenes process.

During freshmen orientation, ASB held an assembly for the new freshmen with fun activities to make students feel more comfortable and excited for high school, as it can be a big transition.

“I wasn’t particularly excited, nor did I have high expectations for my time at Carlmont. As my freshman year has gone on, the activities that ASB planned have made me more and more appreciative as well as happy in general, like the gender equality campaign and activities that address stress like the Dogs in the Quad,” said freshman Kaylie Moropoulos. “Heritage Fair celebrated everyone’s differences instead of ignoring them like my previous schools have done. I want to join ASB because the people in it have made Carlmont feel more like a family than school to me and inspired me to do the same for future students.”

Even though not all students will be accepted in ASB, it is recommended that they apply again next year and continue to be a part of the Carlmont community.

“All  successful people fail at sometime in their life and they can really learn a lot from that failure. They should see this as an opportunity. Find out what it is they can do better and look to apply those lessons in other leadership opportunities on campus and elsewhere. Don’t let this be the one opportunity to get involved,” said Kelly.