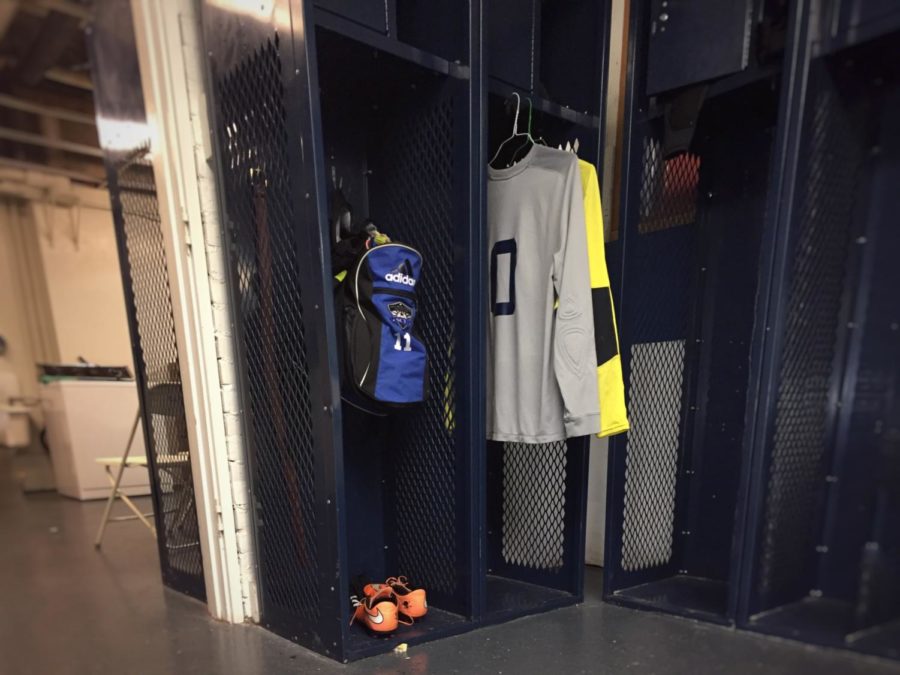 The team room is used by the varsity boys soccer team during the winter season. Players leave their gear in their specific locker. Muaath Nofal, a senior on the soccer team, said: "Basically, we keep our jerseys in there and, each weekend, Coach Will Stambaugh washes them for us."

Although sports teams spend countless hours during their season training and bonding, a team locker room can help lead to friendships that leave the field.

These friendships can lead to greater success on the field.

But many athletes feel that access to team rooms are not equitable.

A member of the girls’ varsity soccer team Mackenna Summers said, “The girls do not have a locker room so we change in the bathrooms, and I feel this is unfair.”

Carlmont provides an athletic locker room located by the administrative office, initially intended for the varsity football team to use. Eventually, the boys’ varsity soccer and boys’ varsity lacrosse teams ended up using it during their season.

Coaches are responsible for choosing whether or not their team is to use the athletic locker room. In spite of student’s perceptions, coaches determine the use of the team rooms.

Girls’ varsity soccer coach Tina Smith feels that it is unnecessary to use the team rooms as her squad has bonded without the locker room.

Part of the student’s perception of lack of access may be because of the construction at the beginning of the school year. The team rooms within the locker rooms were not ready for full use until this school year.

“When the weight room construction began we closed the team rooms and turned them into temporary weight rooms,” said Athletic Director Patrick Smith. “We had the grand opening on Oct. 26, and since then, have been transitioning the team rooms back their original use. They are available for teams to use again.”

JV girls’ basketball coach Vic Trierweiler said, “Prior to, at halftime, and after our games, we use the team rooms. We also use it to watch game film of previous games.”

Coaches are not always the ones leading discussions regarding previous or upcoming games. The players spend time boosting one another up to increase their level of play. Team rooms serve their purpose and bring teams closer.

Sophomore Gaby Goldman, an athlete on the JV girls’ basketball squad, said, “The team room is an area for us to get hyped, talk about our strategies, and determine our goals for the game.”