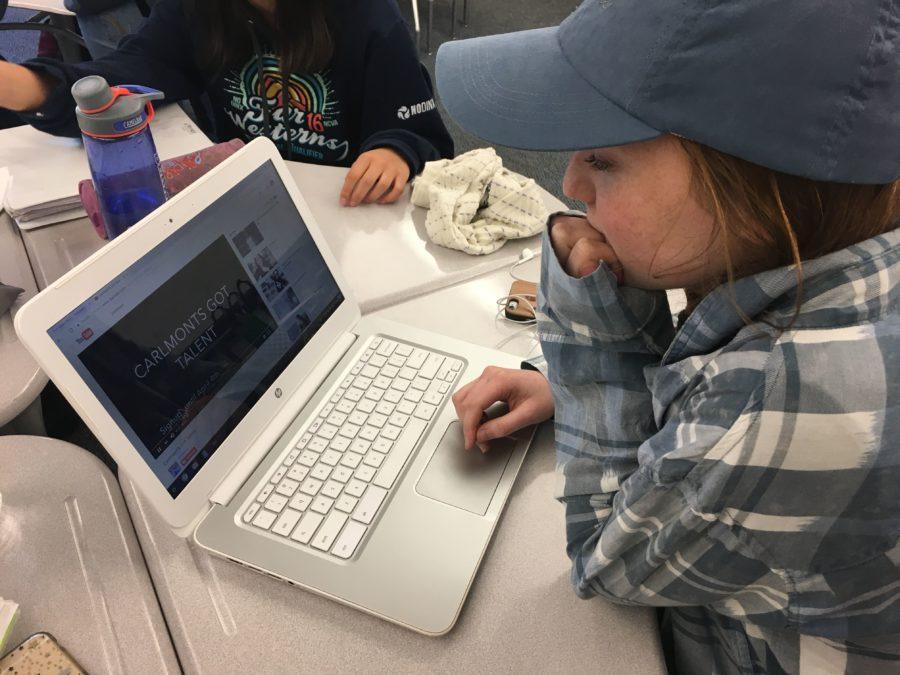 Elyse Geimer, a senior, watches a recent video about the upcoming event "Carlmont's Got Talent" on a computer after school.

The eyes of students light up as they view the most recent video made by ASB on their phones after getting a notification on social media about recent events coming up.

These videos and social media posts would not have been made possible without the brains of Media Commission. Media Commission is a branch of both the ASB executive and service councils and is a group of dedicated students who aim to make quality content to promote events held around campus.

Media Commission creates everything from videos to social media posts, to make sure the campus is well-informed and engaged in school activities.

These school activities range from rose sales for Valentine’s Day to ping pong tournaments held during lunch, where videos are made to draw attention to events and increase attendance and participation.

Videos, as well as other multimedia pieces, can take a lot of time to make and can be a long and tiring process.

Executive Council Media Commission Supervisor Kyle Jung, a senior, said, “We have to plan most videos at least three to four weeks in advance if we want to make high-quality content. A few of those weeks goes to writing a script itself, which can end up being pretty time-consuming.”

The process of creating a video is done together as a commission, as they brainstorm new ideas and ways the video should be shot to maximize views.

“We first do a storyboard of what we want in it then go through a shot list to plan for the video. Then, we get whatever props we need and film them. Finally, we put all of the shots together to make one video,” said Shamsai.

Once the videos have been shot and published, Media Commission members can reflect on the work they have done to raise awareness on campus for the multitude of events that happen on the daily.

“A lot of people can be intimidated by the process of making a video, but it’s pretty easy to get a hang of. At first, I was pretty scared, but it’s a really fun and rewarding experience once we’ve seen it all the way through to the end,” said Shamsai.

Salma Sebt, a junior and commissioner for Media Commission, believes that controlling the sound comes down to tiny adjustments.

“We just updated our systems, and now we have four speakers to use during assemblies. We have to man the volume to a certain level so it is not too loud that it will hurt a student’s ears, but also not too quiet that they can’t hear the sound at all,” said Sebt.

For Sophomore Evelyn Gordi, videos and other multimedia pieces made by Media Commission encourage a sense of community on campus.

“I think it’s really cool that the Media Commission makes videos for the student body to view. I think they put a lot of effort into making quality content and their videos help make Carlmont a more accepting community,” said Gordi.

For students in Media Commission, simply making an impact on students is what they strive to do.

“My favorite part of being in Media Commission is making videos because I get to have a big impact on the way students at Carlmont see and how hyped up they get for certain events, making it all worth it in the end,” said Sebt.