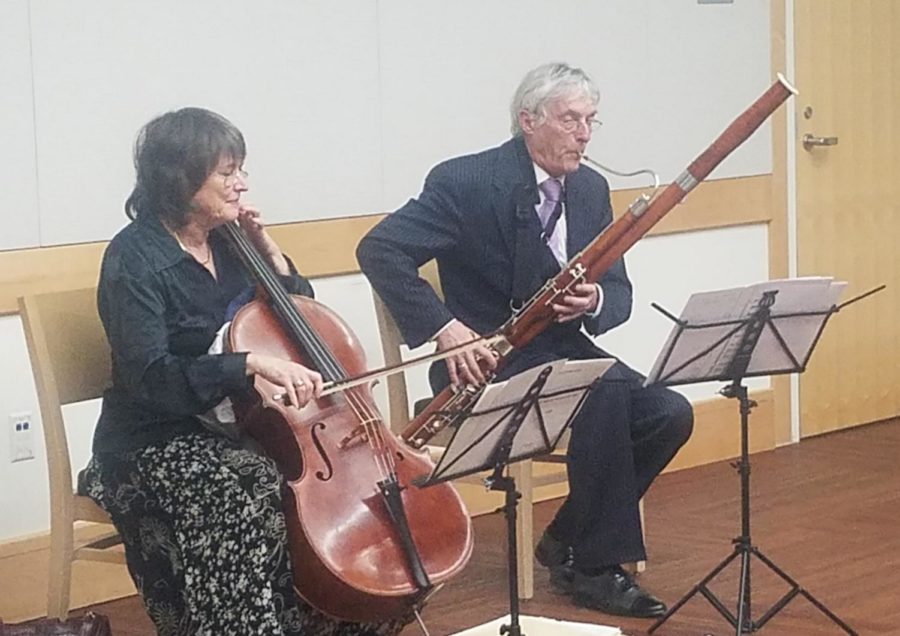 Friedrich Edelmann and Rebecca Rust performing a ragtime piece for their audience.

The Belmont Library hosted yet another musical performance in an attempt to spread knowledge about different music styles and engage the audience in a unique performance.

“From Baroque, Classic to Ragtime: An Afternoon With Music” was not just a regular music performance. The musicians interacted with the audience through their music as well as telling the history of the compositions that they played.

“I really liked how they combined the history with music,” said Uli De La Cruz, an audience member. “They explained their music and instrument choices in detail which made the performance so much more interesting.”

The audience members were able to see how music styles developed and advanced over the course of history.

“In this program, we tried to show how diverse the world of music is and how much it has developed over the past century,” said Friedrich Edelmann, a performer. “We picked compositions that would represent their time periods the best.”

The compositions that were performed were representative of their time periods, yet they were not the most commonly performed ones.

“I was very intrigued by this particular performance because of the composition that they played. I have not heard them before,” said Christy Wampole, a music instructor. “It’s not very often that I go to a concert where I have not heard every composition.”

Besides surprising the audience with unique pieces, the performers also added in an educational element by telling the audience more about the history of the instruments that they played.

“When I came in, I had no idea what a bassoon was,” said De La Cruz. “They did a good job of explaining what the instrument was and how it was used.”

In addition, the performers also made sure to give more information about the pieces that they played and their importance.

“Music is always changing. It has not been the same ever since it was invented,” said Edelmann. “Music always changes as the society and people in it change. We picked the majority of our pieces because we believe that they carry special pieces of history in them.”

The performance was striking because of the unique delivery and information presented by the performers. It allowed the audience to learn more about the world from a different perspective.

“At the end of the day, I came here because I love to educate myself,” said De La Cruz. “When I first read about this performance it seemed like something that I have never seen before. It was a fascinating combination of music and history.”