Music Production Club hosts the next generation of music producers 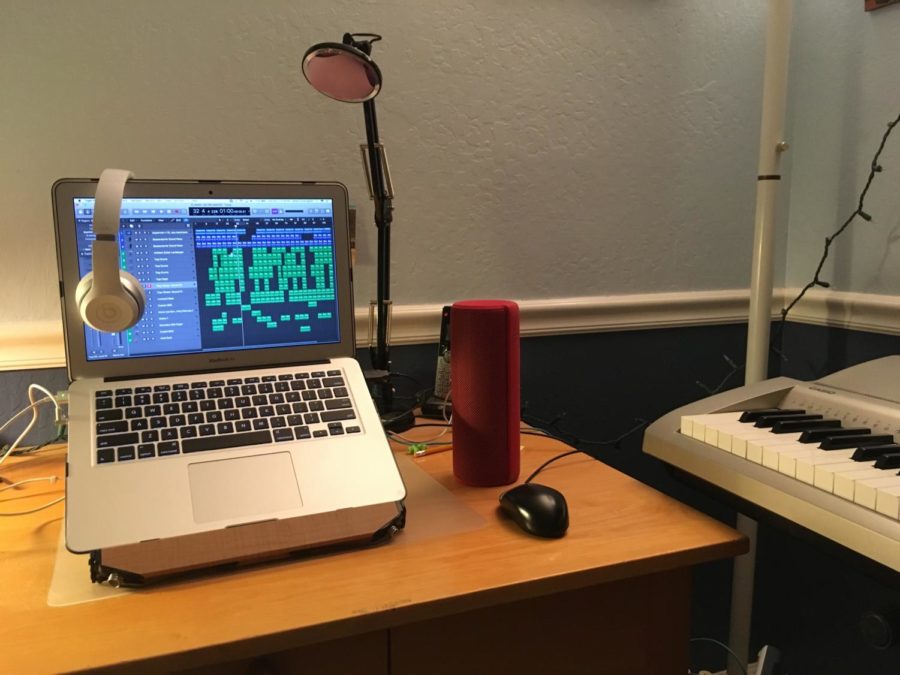 For many young producers, studios are difficult to come by and even more difficult to rent out and use. Many work out of their bedrooms in bedroom studios.

Heavy bass booms out of a speaker’s subwoofers as a loud melody reaches the ears of passersby.

These are the sounds of the weekly Music Production Club, founded in order to provide digital musicians at Carlmont a way to express their passions and talent.

“Everyone in the club is connected with one another so it’s easy for us to text the person for a song idea,” said Lucas Courtney, a sophomore. “This makes collaboration easy.”

According to Quartz Media, any popular songs today is produced on digital audio workstations (DAW) instead of what many would consider a traditional band setup. These computer programs, such as Apple’s Logic Pro X or Image Line’s FL Studio, have in essence become a way for anybody to begin making their own music.

However, the widespread availability of music production has made it harder for aspiring producers to get their music heard.

“It’s difficult to get heard because people don’t care unless someone they know tells them about your song,” said Justin Sundermeyer, a junior. “Luck also plays a huge factor in making it big as a producer.”

By listening to popular producers and analyzing what makes a song sound great, student producers in the club can learn how to emulate some of their styles.

Some of today’s popular producers have come from making beats in their bedrooms, according to The Fader. For example, Leland Tyler Wayne, also known as Metro Boomin, is one of the biggest names in today’s music industry. His producer tags, “Metro Boomin want some more,” sung by rapper Young Thug, and “If Young Metro don’t trust you I’m gon’ shoot you,” sung by rapper Future, have become synonymous with a well-produced song. Wayne grew up producing tracks out of his bedroom for his friends in Atlanta, Georgia, according to The Fader.

Now, Wayne’s net worth is 14 million dollars. He is arguably the biggest name in the music production industry alongside other producers such as Mike Will Made It, Sonny Digital, and TM88, according to Genius.com.

This is the dream for many students in the Music Production Club.

“I want to study music production when I go to college,” Sundermeyer said. “I’d like to understand more about the technology beneath the hood in professional songs, as well as how to use different music software and recording technology.”

Every week, the club challenges students to push their creativity through weekly competitions. These competitions allow producers, rappers, and singers to create new content that is both appealing to make and to listen to. Competitions include rap freestyling in front of the club, preparing a beat that the club can comment on, or as in the last contest’s case, sample a song and create a beat out of it.

Some weeks, producers can work together to build a collaboration track. One musician at a time takes their turn adding another layer on top of the song that is being built before the club’s eyes. The rappers then write verses to the new song and perform it in front of the group.