The psychological effects of music on the brain 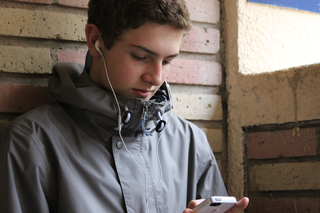 Sophomore Jimmy Rudger pauses to select a new song as he’s walking through the halls.

Students walk through the hallways, earbuds in, faces blank. We see it every day, but what we don’t see is the party going on inside their brain.

In the last few decades, neuroscientists have made numerous breakthroughs in further developing their understanding of how the brain works by monitoring it in real time. With the use of FMRI and PET scanners, neuroscientists such as Dr. Anita Collins from the University of Melbourne have discovered that everyday activities such as reading or problem-solving each have a corresponding area of the brain where activity can be observed.

Activities such as listening to music cause the brain to light up on PET scanners in not just one corresponding area, but in multiple areas. “In the first second of listening to music, the brain begins to take apart the sound, analyze the various harmonies, rhythms and melodies, and put it back together to make a unified musical experience,” said Collins.

Sophomore Jimmy Rudger said, “I listen to music every day because it gets me thinking and all the different genres leave me with different emotions. I have had many songs change my mood from bad to good before.”

According to Daniel Levitin, a psychologist who studies neuroscience and music at McGill University, “listening to music activates the same areas of the brain in everyone, so it doesn’t matter what one’s preferences are in music, everyone still receives a unified musical experience.” 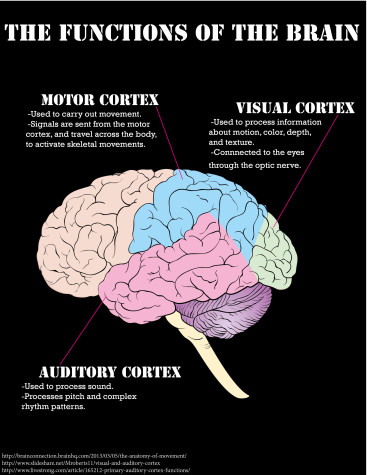 Carlmont band director John DaBaldo said, “When you’re playing an instrument, you’re using a lot of the different parts of your brain. You have to count, and keep time which are all things the left side of the brain controls. On the right side of the brain you use more of your creativity to develop shapes and phrases within the music and discover how your specific melody fits within the music. Altogether it’s like the epitome of multitasking, just in front of a paying audience.”

Structured practicing of an instrument requires the brain to develop organizational skills and learn how to manage one’s time well.

Band student Alice Gevorgyan said, “I’ve managed my time a lot better ever since I started playing in band in the 6th grade. I know that I have to practice, so I get my homework done more efficiently and space out my time well.”

Singing is another activity in which a majority of the brain is engaged at once. Studies have shown that singing is a perfect tranquilizer for the brain because it soothes the nerves and elevates one’s mood at the same time.

This is due to the amount of oxytocin, a hormone in the brain, that is released while singing. Oxytocin enhances feelings of trust and bonding and alleviates anxiety and stress.

Singing has been shown to have positive effects on people, according to Dr. Julene K. Johnson from the University of California, San Francisco. Due to the large amounts of feel-good chemicals released in the brain while singing, people’s moods improve and they become more energetic.

Carlmont choir president Sierra Segal said, “Singing causes me to do better at everything because it leaves me happy. Singing puts me in a good mood, which in return motivates me to do better in school especially.”

Whether people are playing an instrument, singing, or listening to music, the brain is engaged at all times and in numerous and intricate ways. Music is a powerful thing that can boost people’s moods, enhance life skills, and provoke significant emotional response.

Collins said, “I think all children should learn music from the day they are born and even before. We have this now proven to be incorrect idea that music learning is only for the talented. As a human race, we have to create music which is a unique activity as a brain development tool, and therefore we are all musical. If everyone did it it would be a normal part of human development and the education system, not an outlier.”