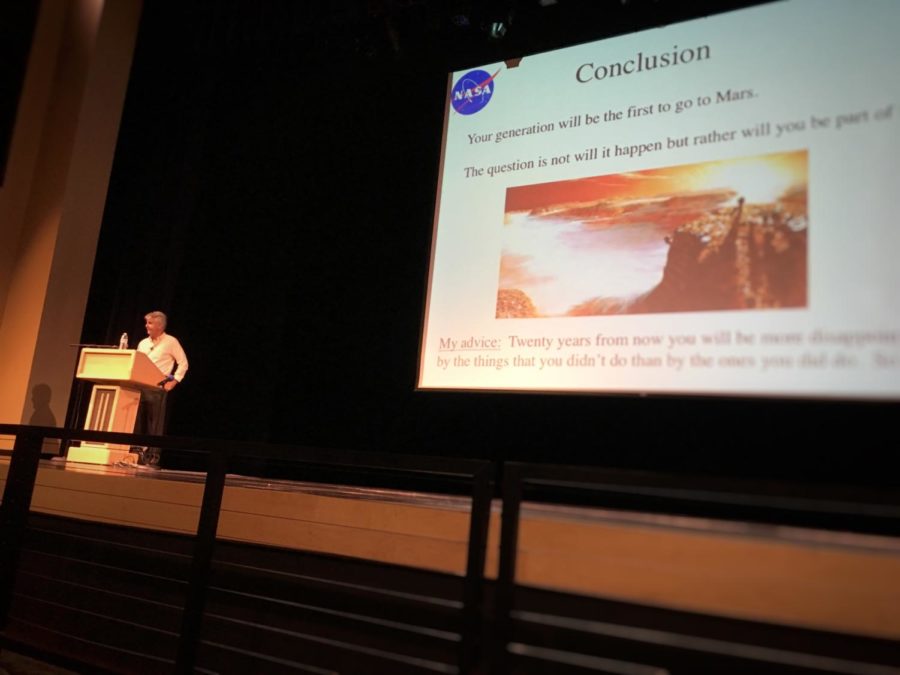 NASA researcher Michael Flynn sums up his presentation with a few brief words of advice for the audience. Flynn said, "Twenty years from now you will be more disappointed by the things that you didn't do than by the ones you did do. So do it!"

Scientists, as well as ordinary people, are continually grappling with the question of whether we are alone in the universe. In order to answer that question, they must travel beyond the mere reaches Earth’s atmosphere, and into space.

On Nov. 8, Michael Flynn arrived at Carlmont High School to give a presentation on the search for life and water in our universe as part of Carlmont’s science lecture series.

According to Tina Smith, the science department chair and Carlmont Biotechnology Institute director, the science lectures began in 2010.

“Mr. Raffa and I wanted to offer our students different sciences besides biology, chemistry, physics, and biotech […] to help students understand that there’s more than just what Carlmont offers,” Smith said. “I find that students are very restricted in the way they look at science, and there are so many different ways to make a good living and contribute to society through science, especially in this area.”

The lectures give students an opportunity to explore topics outside of the Carlmont curriculum, and maybe even find a subject they want to pursue as a career.

Although there may be some logistical obstacles, Smith hopes the science lectures will be able to continue in the coming years.

As 7 p.m. rolled around, students filed into the Performing Arts Center, eager for first science lecture of the year to begin. The previous two were canceled due to personal matters and bad air quality.

Flynn began his presentation by addressing NASA’s mission to find signs of extraterrestrial life and to continue the search for life on Mars.

“To date, the search for extraterrestrial life has really focused on searching for liquid water. One of the conditions we’ve identified on Earth that is critical for life forms is water,” Flynn said.

According to Flynn’s presentation, so far scientists have verified that there is at least solid water on Mars. There are also strong indications that occasionally the ice turns to liquid water and flows on the surface of Mars. Besides searching for water on distant planets, NASA also uses robots to gather data from places like Mars, whether through photographs or analysis of physical matter from the planet’s surface.

However, there is only so much a robot can do.

“One of the problems we have with this robotic technology is that if you haven’t taught it to do what it has to do, it’s never going to be able to figure it out; it’s not a creative entity,” Flynn said.

NASA hopes to launch a human-run mission to mars in 2030.

Although Flynn talked a lot about NASA’s goals, the highlight for many students was when he described the aspirations of private companies.

“I found it surprising that there’s a UK based company that’s planning on sending a population of people on a one way trip to Mars to colonize the planet,” said Andrew Luna, a senior.

Without NASA’s financial restrictions or limitations from the government, other companies are free to do what they want, such as building a space hotel or organizing a one-way mission to Mars.

Towards the end of the presentation, Flynn began to focus more on his area of work, the development of water recycling technology.

In order for humans to make it to Mars and back, they will need systems that can repair themselves. To do so, mechanical and biological concepts must be combined, according to Flynn. While this sort technology is still in the works, NASA has developed other useful technology, such as a plastic bag type tool that can make certain substances drinkable. Beyond its uses in space, Flynn said this technology could also serve as a way to provide troops with a constant source of liquid or aid cities struck by natural disasters.

The night of the science lecture was centered around the future, the next generation.

“There’s a famous industrialist […] he said you have three choices in life: you can lead, you can follow, or you can get out of the way. I would suggest you lead, and you make a decision right now that this is the objective you are going to achieve, and, no matter whether you fail along the way, you just keep that objective in front of you, and you will be successful,” said Flynn, to conclude his presentation.