Nathaniel Woods: How a modern execution impacts the future of the American prison system 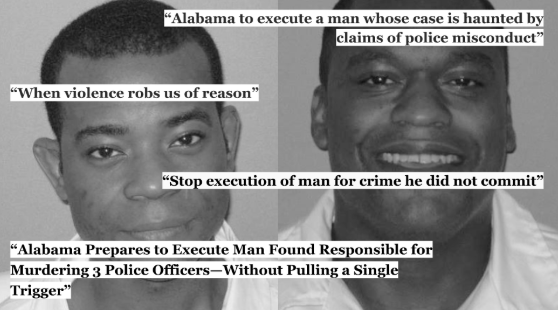 Nathaniel Woods and Kerry Spencer's photos are placed side by side with the headlines of articles about how this case impacts the meaning of justice. While Woods was killed for a crime he didn't commit, Spencer continues to walk free for a crime he confessed to.

The case of Nathaniel Woods

Nathaniel Woods is a 42-year-old African-American man from Alabama. In 2004, police officers broke down his door and tackled him in his kitchen on domestic assault charges. He quickly surrendered in front of Marquita McClure who later testified as a witness. Another man, Kerry Spencer, was asleep on a couch in the living room. Spencer’s first reaction was to grab a nearby rifle and to start shooting. When backup arrived, all three officers were confirmed dead. McClure testified that Woods yelled, “F**k the police,” and threatened to shoot people earlier that day but did not believe the murder was premeditated. Woods was charged with the murder of three Alabama police officers and given the death penalty. He has been sitting in jail ever since, with harsh treatment by police and prison guards due to the basis of his conviction.

In a handwritten letter released this week by one of Woods’ attorneys, Kerry Spencer confessed that he was the sole gunman in the 2004 slayings.

Spencer wrote, “Nathaniel Woods is 100% innocent. I know this to be a fact because I’m the person that shot and killed all three of the officers that Nathaniel was subsequently charged and convicted of murdering.”

Despite an outright confession of first-degree murder from Spencer, Woods’ case was never re-opened and Spencer was never charged in court. Woods’ appeal to the Supreme Court was turned down last year and Alabama state prosecutors stated that they would go forward with executing Woods on March 4, 2020.

Woods’ case has been in the international spotlight for over a decade, and a number of celebrities have advocated for Woods.

Martin Luther King III, the eldest son of the civil rights icon, represented Woods in court. In a letter he wrote to the governor this week he said, “In just two days, your state, and the state I was born in, is set to kill a man who is very likely innocent. Killing this African American man, whose case appears to have been strongly mishandled by the courts, could produce an irreversible injustice.”

Kim Kardashian West and Bart Starr Jr., the son of the NFL Hall of Famer, have also defended Woods and slammed the U.S. criminal justice system.

Alabama’s criminal justice system today is most heavily influenced by what happened in 1865 — that is, when the American Confederacy surrendered to the Northern Union to end the bloody Civil War. The south’s economy relied on black slave labor which was outlawed by the 13th amendment, passed three months before the war ended.

The 13th amendment of the constitution outlawed slavery everywhere except for prisons. Today, prisoners are forced to make a plethora of products, clear the forests of Mississippi, and fight the fires of California. These men and women can expect a maximum payment of $1 a day for 12 to 14-hour workdays, as prisoners are prohibited from earning money.

While the U.S. is only 13% black, the average prison population is 40% black and sometimes double that in southern states. Organizations like the Southern Poverty Law Center say this is because many states have disproportionately incarcerated black men since 1865, sometimes for crimes they didn’t commit. Even though many prisoners acquire valuable skills while in prison, most jobs turn them away when they are freed. These men have no choice but to turn to crime. The predominantly white police forces around the country often arrest black men on misdemeanors or minor drug charges. These men now receive harsher sentences due to prior incarceration, thus creating a cycle of crime and punishment.

Modern historians believe that the only way black men can step out of this cycle is by ending mass incarceration and prison slavery. Instead of harshly punishing people for misdemeanors as minor as possession of marijuana, prisoners should be rehabilitated, educated, and given the means to lead a better life. Many formerly incarcerated people have proven that when given the choice between crime and a stable job, they will choose a stable job.

An unexpected turn of events

Nathaniel Woods woke up in his Alabama prison cell bright and early. The day was March 5, 2020. After living in prison for 16 years, this day would be his last.

Prison guards served him pancakes with syrup and bacon which he barely ate. That afternoon, Woods’ closest friends and family visited him to have a very tearful conversation. Woods then asked the prison guards for a massive chicken and sweet potato dinner which he also barely ate. He knew this would be his last meal.

Soon, 6:00 p.m. rolled around. Woods was supposed to be sitting in a chair with a syringe full of potassium chloride running through his veins. Instead, he was sitting back in prison, overjoyed by a last-minute ruling by the Supreme Court. Nathaniel Woods had survived death row. Or so the entire nation thought.

Woods was sentenced to the death penalty for murdering three police officers in 2004. Although the Supreme Court refused to examine Woods’ case last year, the judges ordered a temporary stay on his sentence, just minutes before he was supposed to die.

For three hours, human rights activists and lawyers celebrated this massive victory. Many of these people used social media to keep millions of eyes on this case for over six years. As a result, A-list celebrities defended Woods and made sure the nation’s top lawmakers and justices couldn’t ignore this.

Black civil rights activists hoped that this would be a turning point in the history of mass incarceration. The New York Times reported that of 1900 defendants freed from prison after wrongful conviction, over 50% of them were black. Activists have been working to make sure that all innocent people currently sitting in jail can walk free. But Woods would never have the chance to join that statistic.

Nathaniel Woods never pulled the trigger, but Alabama still convicted him of murder.

Even though the United States Supreme Court issued a temporary stay delaying his execution, the stay was lifted later Thursday night, and Alabama Governor Kay Ivey issued a statement declining to intervene. This officially ended any final chance for Woods’ execution to be repealed.

Woods was executed by lethal injection at 9:01 p.m. He did not have any last words.

Woods became the 67th person to be put to death by the state of Alabama since capital punishment was reinstated in 1976.

His case highlights Alabama’s persistence in carrying out death penalties, even as capital punishment has lost approval in recent years. His case also brought attention to the unconstitutional practice of allowing death sentences without a unanimous decision.

Through a series of unexpected events, the unfortunate fate of Nathaniel Woods demonstrates the injustices of the American criminal justice system. Despite many pleas to reconsider his sentence and even a confession from the guilty party, Woods was killed because of a crime he did not commit.