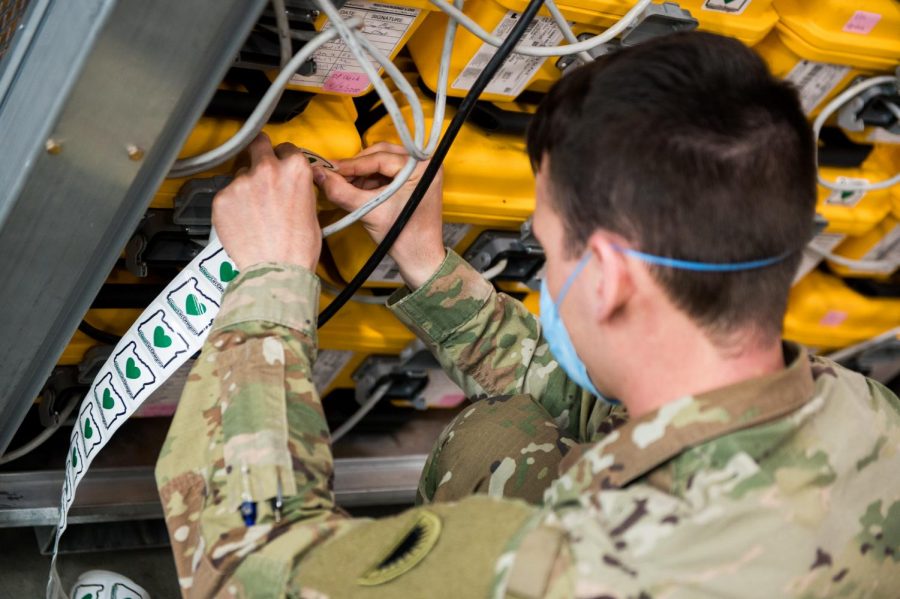 The Oregon National Guard prepares the shipment of 140 ventilators to aid New York's shortage of ventilators.

Hospitals around the nation are continuing to struggle with the shortage of protective gear and medical supplies such as thermometers, disinfectants, medical gas, food, linens, and toilet paper.

Many doctors throughout the United States are still pleading for ventilators, as the federal government has limited the number of devices given to states.

As the demand for personal protective equipment has risen due to COVID-19, the stock of supplies is running low.

Two Department of Homeland Security (DHS) officials claimed that the stockpiles in the Department of Health and Human Services’ supplies are severely depleted and nearly gone. The stockpile was not equipped to handle a nationwide pandemic according to The Washington Post.

In Wednesday’s White House press briefing, President Donald Trump told reporters that he had sent supplies directly to hospitals and confirmed that the stockpile is nearly depleted.

The national shortages have forced the Federal Emergency Management Agency (FEMA) to begin an international search for equipment. In turn, the efforts have created a competition between states and the federal government to secure the needed medical supplies.

The fierce competition that could mean life or death has reeled in fraud among supplies. In California, the state received useless, moldy masks. In Los Angeles, a labor union attempted to secure millions of N95 masks, but they never materialized. The cases of swindling in such a dire time have spurred a series of federal investigations into manufacturers and providers.

As healthcare workers are trying to find enough medical supplies to stay afloat, state and local governments are trying to purchase the same equipment, creating a costly bidding war among states and healthcare providers.

“A system based on state and local governments looking out for themselves and competing with others isn’t sustainable, and it’s possible that those with the most critical need won’t be able to get the equipment they need,” said John Cohen, the former acting undersecretary of the DHS, in an interview with ABC News.

Due to the increased vying between governments, California is trying to band together with smaller states to make sure they can obtain necessary supplies.

With a population of 40 million people, currently having 15,207 cases and 351 deaths, California has the fourth-most number of cases in the U.S., which is now the leading nation in COVID-19 cases with 356,942 cases nationwide and 10,524 deaths, according to CNN Health.

So far, California has not seen a surge in cases like New York or Louisiana has, but people are preparing for a possible jump in cases in the upcoming weeks.

On April 6, Gov. Gavin Newsom announced that California would be loaning 500 of its state-owned ventilators to the stockpile to aid New York. Their efforts were similar to Oregon, who sent 140, and Washington, who sent 400 ventilators, to New York earlier in the week, according to The New York Times.

New York remains the center of the nation’s outbreak; however, the death toll has remained relatively steady, seeing only 599 deaths over the past day. Gov. Andrew Cuomo expressed cautious optimism that the sharp curve of cases and mortality rates may be starting to level off.

“This has been described as the wild, wild West, and I think it’s appropriate,” Newsom said.