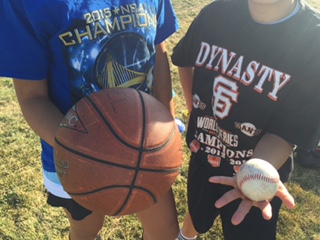 The Golden State Warriors and the San Francisco Giants both won a national championship in the past 12 months.

Any sports fan would admit that it has been a pretty great year to live in the Bay Area.

Back in October, the San Francisco Giants won their third national title in five years after defeating the Kansas City Royals in the World Series. Eight months later, the Golden State Warriors shocked the entire country by winning their first NBA championship in 40 years.

Some adults think this generation is lucky because they suffered through a sports drought for seasons before Bay Area teams finally made a bang.

Senior Megan Handley said, “I think my parents are a little jealous that [the Warriors and Giants] have just now started to do well. When they were my age, local teams weren’t having as much success.”

However, many other adults are excited to see their favorite teams finally become successful, and are glad that their children can share the excitement along with them.

Senior Kayla Fong said, “My parents have always been huge Bay Area sports fans. They would always take me to Giants games when I was young, so when the Giants started winning the World Series they were super excited. They think it’s an amazing experience for our generation to be able to experience and to be a part of the celebration through the parades for our Bay Area sports teams.”

Of course, it wasn’t just years of waiting that finally brought national titles to the Bay. It was also the contribution of talented athletes and dedicated coaches.

Stephen Curry, point guard of the Warriors and MVP of the league, tweeted out back in 2009, “Promise to all the Warrior fans…we will figure this thing out…if it’s the last thing we do we will figure it out.”

Head Coach Steve Kerr was new to the team this past season, and he wasted no time. With the help of three-point legends Curry and fellow guard Klay Thompson, the Warriors proved throughout the entire season that they were a force to be reckoned with.

These national titles have greatly impacted the way local students watch the sports they love.

Junior Matthew Shen said, “It’s interesting to be able to watch great teams excel, especially as the Warriors move away from the traditional ‘big man’ game of the NBA.”

“They’re leading a movement in a change of era for professional level basketball,” added Shen.

With both NBA and MLB championships in the past year, it will be interesting to see how Bay Area teams do in the upcoming seasons.

Whether they continue to thrive, or fall back into a drought as dry as California’s current water situation, both the Warriors and the Giants have made a name for themselves over these past 52 weeks that is likely to follow them around for generations to come.