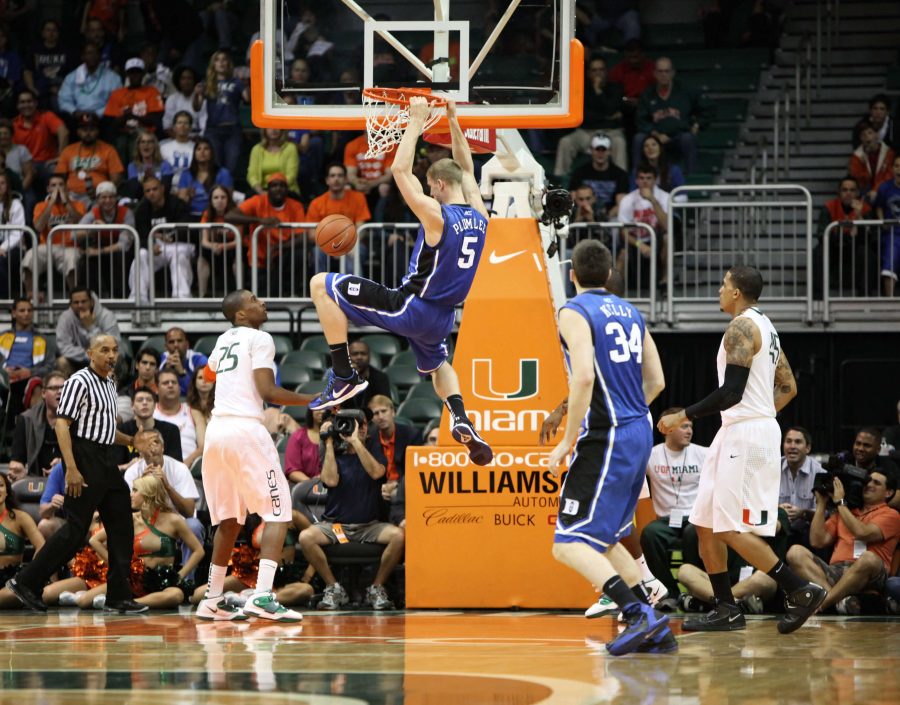 A Duke University player makes a basket during a game against the Miami Hurricanes. One of Duke's opponents was scheduled to play at the university, located in North Carolina. However, the game was canceled due to controversy over the HB2 law.

The National Collegiate Athletic Association (NCAA) decided to withdraw seven championships from North Carolina, including the well-known March Madness basketball tournament, because of a law passed by the North Carolina legislature.

Passed in March of 2016, the law, known as House Bill 2 (HB2), requires transgender people to use the bathroom that corresponds to the sex printed on their birth certificate. Many people, organizations, and companies have condemned HB2 for infringing upon the rights of the LGBT community.

The NCAA released a statement explaining the reasoning behind the relocation of the games, “NCAA championships and events must promote an inclusive atmosphere for all college athletes, coaches, administrators, and fans. Current North Carolina state laws make it challenging to guarantee that host communities can help deliver on that commitment.”

The NCAA has received widespread support from notable figures such as Hillary Clinton, who sent out a tweet supporting the organization. However, many are concerned that this political move by the NCAA will have negative consequences for both the organization and North Carolina.

North Carolina Republican Party spokesperson Kami Mueller released a statement saying, “This is so absurd it’s almost comical. Perhaps the NCAA should stop with their political peacocking — and instead focus their energies on making sure our nation’s collegiate athletes are safe, both on and off the field.”

Sports, especially basketball, are an important part of the North Carolina culture. Some people are angry about the NCAA’s decision, as it impedes their ability to partake in something they love.

Carlmont student Kazim Haider, a junior, agrees that this ban may be hurting the wrong people.

“I think this is a bad idea because the ban isn’t doing anything to the people who need to change their perspective. It is punishing many people who have no opinion on the issue or even disagree with the bill,” said Haider.

In addition to the NCAA, various other college basketball teams have canceled games in the state and moved to ban state-sponsored travel to North Carolina.

As controversy continues to rise, both the NCAA and the North Carolina Republican Party stand strong beside their respective decisions.