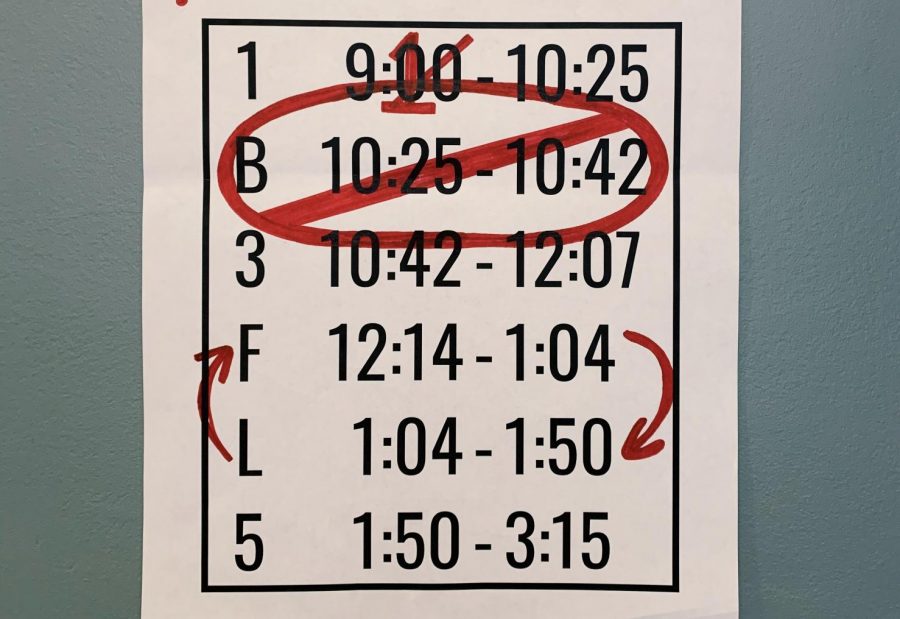 The Wednesday block schedule has been drastically modified due to survey responses from the students and staff.

Due to the negative responses from the block schedule survey for the second semester, the administration and Bell Schedule Committee came to the consensus that they would change the bell schedule for Wednesdays.

Much of the feedback reported that the ten-minute brunch between first and third periods on Wednesdays was not beneficial and the post 1 p.m. lunch was far too late and difficult to manage.

Principal Ralph Crame and his colleagues in the Bell Schedule Committee took into account the feedback from the survey to create a new and more efficient schedule.

“Based on the survey results, the Bell Schedule Committee met and looked at all the comments that were made by the students and staff and came up with a more reliable schedule. Obviously, not everyone will be pleased, but the majority of people were for change, which drove the revision,” Crame said.

With this new block schedule for the 2019-20 school year, a new way for students to personally interact with their teachers on a one-on-one level, flex, was created. Flextime allows teachers to have their students makeup tests and quizzes during a fixed amount of time instead of taking time out of their curriculum.

Like many students, Nadine Lahlouh, a sophomore, utilizes flextime by asking clarifying questions she was not able to ask during her lessons, as well as catching up on any curriculum she may have missed while absent.

“If I had missed a period or I’m not able to attend school, I am able to catch up without having to use my lunch. If I ever have a question about the homework, I am able to ask my teacher,” Lahlouh said.

Even teachers take advantage of flex time. Previously, teachers often would have their students come in at lunch or during class periods to make up tests and quizzes they may have missed. With flex, they can now prevent students from falling behind the rest of the class.

Gregg Patner, the administrative vice principal, advocated for the teachers’ time off during lunch. With many students coming in at lunch to ask questions or makeup assignments, teachers didn’t have the opportunity to recharge for the next class.

“Flex creates an opportunity for the students to have access to the teacher and the teacher’s time to be honored. It creates a nice balance,” Patner said.

Many reasons contributed to the creation of a new block schedule. For instance, the need to accommodate standardized testing and assemblies prompted the obligation for extended and more efficient class periods.

Jennifer Cho, the instructional vice principal, explains that occasionally classes such as science or English may require an extended period for labs or other projects and tests.

“Thinking about the standards, for example, NGSS in science as well as labs and Socratic seminars, these standards require more discovery-based discussions that require more time. To do that, it makes sense to move to a modified block on a couple of days a week,” Cho said.

Through the multiple pilot block schedules, the administration is hoping by May 15 the input given by the students, parents, and staff points to one schedule that they will use for the 2020-21 school year.