‘Nerds are the virus’ papers spotted throughout San Mateo County 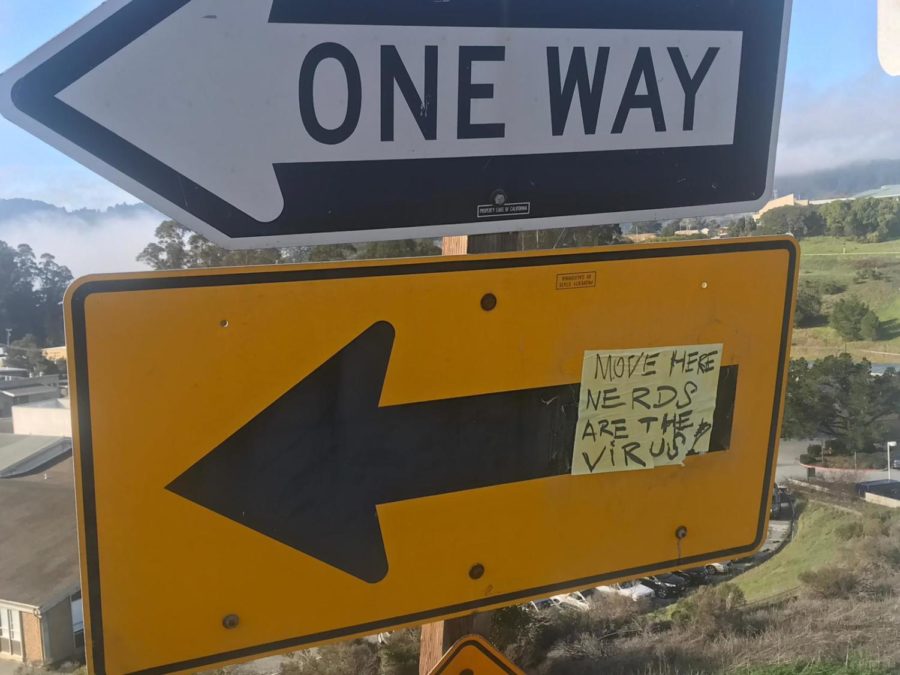 A paper that says "Nerds are the virus" has been put on a one way turn sign next to an intersection between Ralston Ave and Highway 92.

Yellow papers that display the messages “Move here, nerds are the virus!” and “Every day sucks with move here nerds!” have been spotted by people throughout the San Mateo County and continue to be spotted. These yellow papers vary in words but contain the same general negative message about “nerds.”

“I’ve seen them when I drive on Ralston Ave. to Carlmont. I keep seeing them, but I have no idea what they mean,” said Jarrod Harrison, a history teacher.

The papers are relatively small in size, so people driving by may not notice them.

“I have not seen these papers anywhere before when driving,” said Felix Guzman, a science teacher.

A discussion on nextdoor.com had talked about these papers and speculated about their exact message.

Although many people are aware of the papers, police say that they have gotten no complaints about them yet.

“We haven’t received any complaints from anyone about the papers. No officer has reported anything about them,” said Patrick Halloran, captain of the Belmont Police Department.

Most of the signs have already been removed, although the people removing them have not yet been found, along with the people putting up the papers. Signs like these have been seen throughout the County many months ago, and it seems that now, they have been posted throughout the County once more. A discussion on Reddit talked about signs with the message “Move here nerds wrecks our town” which had been posted in Belmont five months ago but has since been removed.

“I saw a sign at the Hillsdale Caltrain station saying this. The grammar is atrocious. I’m hoping to start a discussion about what exactly this means. Who are the nerds, and what are they doing to wreck Hillsdale?” said Reddit user u/kabooozie.

According to shouselaw, vandalism in the Bay Area can be charged with up to three years in county jail and a fine of up to $10,000. However, the people putting up these papers will not face any consequences if the papers can be removed from the signs without it causing them permanent damage.

“If the papers do not cause any permanent damage to the road signs than it would not be considered a crime,” said Halleran.

While many of the older papers have been extracted from the road signs, replacement papers continue to be posted.