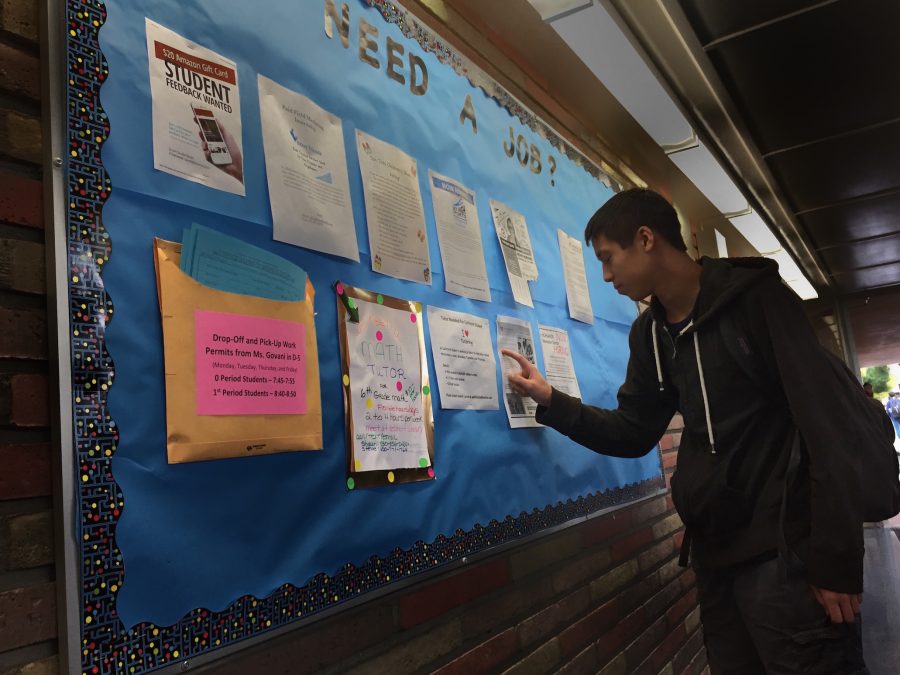 Ryan Kee, a sophomore, searches the job board for work and a place to make connections in the community.

“Prior experience required.” These are the words any new college graduate fears when looking for a job.

However, finding a job can be simpler through networking. Networking, by definition, is connecting with people in the same or similar fields. Through networks, a job application is supported by a trustworthy recommendation.

Stan Popovich, the Director of Community Development in Downers Grove, IL, remarks that networks are better than “just a blank resume.”

An NPR interview with Ashley Stirrup, Vice President of Taleo (a company devoted to creating software for companies to sort job applications), reports that there are “six times as many applications as there are employees in a company.”

Among so many applications, a mere resume is not enough to guarantee an interview, much less the job.

Patrick McDonogh, a sophomore and a lifeguard at the Bay Club, faced the challenge of applying through application alone when applying to the PAC.

McDonogh said, “It would have been easier to get the job if I’d known somebody at the [Bay Club].”

Unpublished jobs, specifically jobs not publicized by advertisements, are likely to have less competition. They can be found through a network and secured with a personal connection.

Lan said, “[Connections are] definitely useful if you want to get a good job, especially nowadays with everyone going into the same field, it would be easier to get a good job with a connection higher up.”

Carlson said, “I got [my] job through a connection […] the chief of the department at the time was the brother of one of the physicians at Santa Clara.”

A basic way to grow a network is by reaching out to people in the same field and then connect with the people they know.

One tool used for quick network building is LinkedIn, a website similar to Facebook, but all about jobs. This rapid connection comes with a drawback as longer connections become less trustful.

Personal trust between people supports each connection. People who go through similar experiences, such as alumni of the same program, will have a greater trust in the connection.

Reed Rouland, a senior, was able to find work as a receptionist for the Artis School of Music through a personal connection.

Rouland said, “[The Artis School of Music] was looking for somebody involved in music and that was polite. They came across my friend who referred them to me.”

According to a Fox Business interview with John Bennett, director at the McColl School of Business at Queens University of Charlotte, 60 to 80 percent of network related jobs come from personal connections.

Bhopale said, “Reach out to professors because they are already in the system for the subject.”

Networking through professors, who have a personal knowledge of the experience, also make a connection more trustworthy.

Organized groups, such as internships, career centers, fraternities, or degree-major groups can help a student connect to people already in the working world.

Popovich was also part of Sigma Pi, a fraternity at Purdue University. Fraternities are valuable for students looking to connect with other students in different grade levels who can help with classes they may have taken or help after graduation in finding a job.

Popovich said, “You join as a freshman or sophomore with two classes ahead of you and leave as a junior or senior with two classes behind you, so that’s 150 people you know […] Once they found jobs, those people, Grads [… can] help you get a foot in the door to help you be considered for the position.”

In the past, advertisements were the easiest way to find jobs. It was difficult to communicate and connect consistently, rendering network building nearly impossible. However, the creation of the internet and social media allowed for constant, global communication.

Networking is now the forerunner in helping people find jobs with a LinkedIn survey reporting that almost 85 percent of hires in 2016 were made through a network.

Maintaining contact with all of a network’s connections is key because everyone and every connection is important.

Carlson said, “If you want to connect, you need to be nice to everybody because they are potentially getting your foot in the door. You never know who will be a connection.”