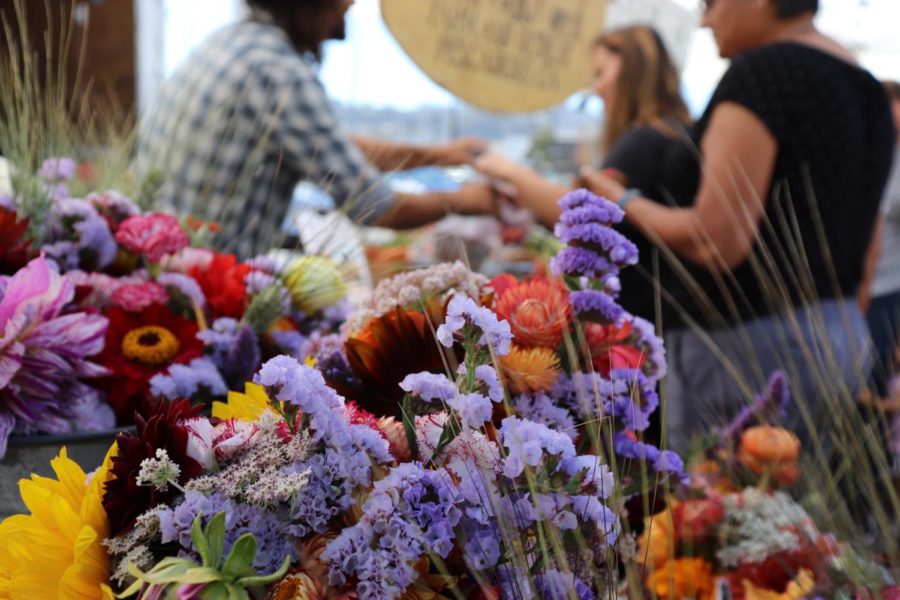 Food is not the only product at Bay Meadows – Green Oaks Creek's wildflowers add an extra splash of color to the market.

Fresh, local produce is becoming an important part of daily life in the Bay Area. Many people now prefer organic fruits and vegetables. Because of this, farmers’ markets are growing in popularity around this region.

Bay Meadows is a relatively new community in San Mateo. It includes apartments, shops, and is located near the Hillsdale Caltrain station for an easy commute. On May 20, Bay Meadows opened a new farmers’ market, which is open for four hours every Sunday until Oct. 20.

“Months ago, the developer sent [the neighborhood] a questionnaire asking what they can do to appreciate the area,” Sidney Wilson, the manager, said. “A lot of people wanted a local farmers’ market.”

The majority of Bay Meadows’ vendors sell at other markets during the week. Because it is a new market, it doesn’t take up much space, and attendance is spread out through the day.

Other markets are more established and have regular shoppers. However, the vendors have hope that this one will grow in the next few years.

“Being that it’s the first year of this market, it’s not as fully established as some of the others. But it definitely has a lot of potential in the coming years, which I look forward to,” said Cole Anastassiou, the founder of Green Oaks Creek.

One challenge for vendors is finding a market to sell at. Though there are several in the area, there are also many local producers looking to compete. Markets with regular producers are also hesitant to give up that spot for a new one because they know the vendor already. The opening of the Bay Meadows market has allowed new vendors a chance in the industry.

Jack and Delaney Lenihan, ages 10 and 12 respectively, started making honey in their backyard four years ago. Their hobby progressed with some help from their parents. First, they began selling their honey at Nini’s Coffee Shop, and have recently decided to look into a farmers’ market.

“It’s hard to get into a farmers’ market because they usually only want one honey vendor, so Bay Meadows was a really great opportunity for the kids,” John Lenihan, their father, said. “Their favorite part is to mingle afterward, trade with the other vendors, and come home with loads of everything. That’s priceless.”