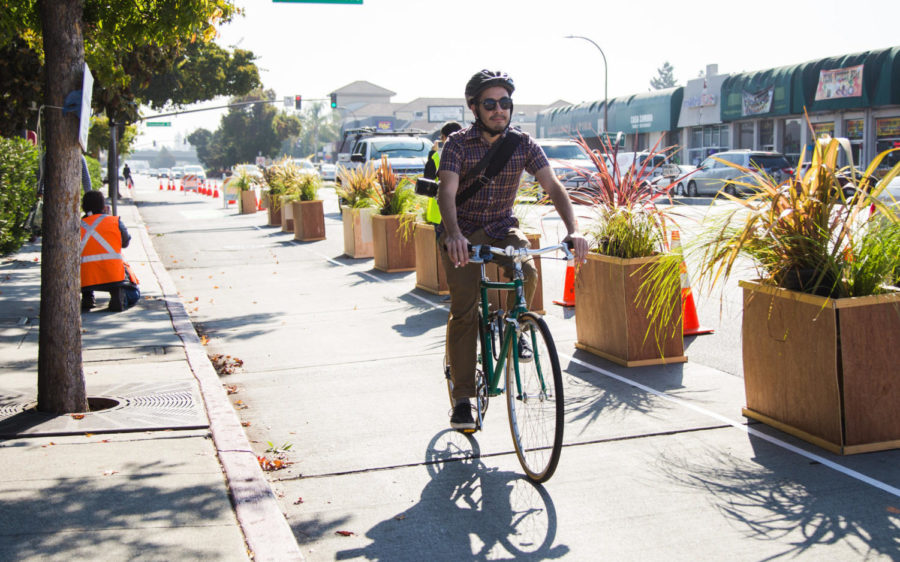 A bikers uses the new protected bike lane on El Camino Real during the test run on Oct. 20.

Every day, bicycle riders take a risk when riding on busy main streets. Because of this, the city of Redwood City has taken some measures to ensure safer streets for everyone.

Many studies that have been conducted over the past several years show that riding bikes on busy streets has become increasingly hazardous for the biker. These studies also showed that many of the collisions sprouted from high traffic speed, shared travel lanes, right hooks, and bicycling the wrong way. In an attempt to combat this, the city of Redwood City formed a committee that strives to find solutions to the rising issue.

With the efforts of the Grand Boulevard Initiative, Feher Peers, and the Redwood City committee, a protected bike lane plan on El Camino Real has been implemented. On Oct. 20, the committee opened up a demo of the bike lane to the public from 10 a.m. to 1 p.m.; between these times, bikers were allowed to test out the new lane.

“I would say that the project overall is for all users of the road. We want to make sure that all users are accommodated [because] that is what the definition of a complete street is. It [the street] works for people who are driving, walking, biking, taking transit, and all the people who cross or take El Camino,” said Kendra Rowley, a senior engineer for Feher Peers and a planner for the team creating the bike lanes.

For many, biking on a street, such as El Camino, to go to work or any desired destination is not viable due to the safety risks.

“Cars are mostly respectful to bikes, but there are just certain pinch points when the parking lane disappears, and the traffic lane is very narrow, and then you always have to worry about cars not realizing that and trying to merging into you,” said John Gale, a bike rider that often bikes on El Camino.

Gale believes that when the protected bike lane officially opens up to the public, more people will be motivated to ride bikes, and people who typically would not ride bikes would become interested.

“If the infrastructure [for the protected bike lane] were to be built, then there would be a lot more people interested [in biking],” Gale said.

There is still a lot of work to be done before the final stage of the plan for the new lane will take place. Creating a protected bike lane involves having enough space for bikers to roam, so street parking or a driving lane for vehicles must be removed. This is one of the main blockers on this project, as not everyone can agree on which aspect to remove. Yet, Karen Davis, a Bay Area biker for over 50 years, is convinced that the parking spaces shoould be removed.

“The parked cars have always been a problem in Redwood City,” Davis said.

When this bike lane opens up, it will not only protect bikers from collision, but it will also benefit local businesses along El Camino. For some bike riders, they choose their destinations based upon how easily it is reached by bike. For instance, Davis bikes everywhere she can, so when a route is not safe for her to bike on, she simply chooses a supplementary route. This hurts local businesses that are located along busy streets because they miss a lot of business from the potential bike riders.

Not only will these new bike lanes create a safer environment, but they also will encourage more exercise and give lower-income families who cannot afford cars a chance to bike safely on busy streets.

When this project goes into effect, many hope that it will help save lives and that it will continue to improve the lives of others by creating a safe street for all who use the road.

Lindy Chan, a staff member of the Grand Boulevard Initiative, said: “We want to improve modes of transit for everybody. We want it to be better for cyclists, safer for pedestrians, easier for buses, and easier for cars.”