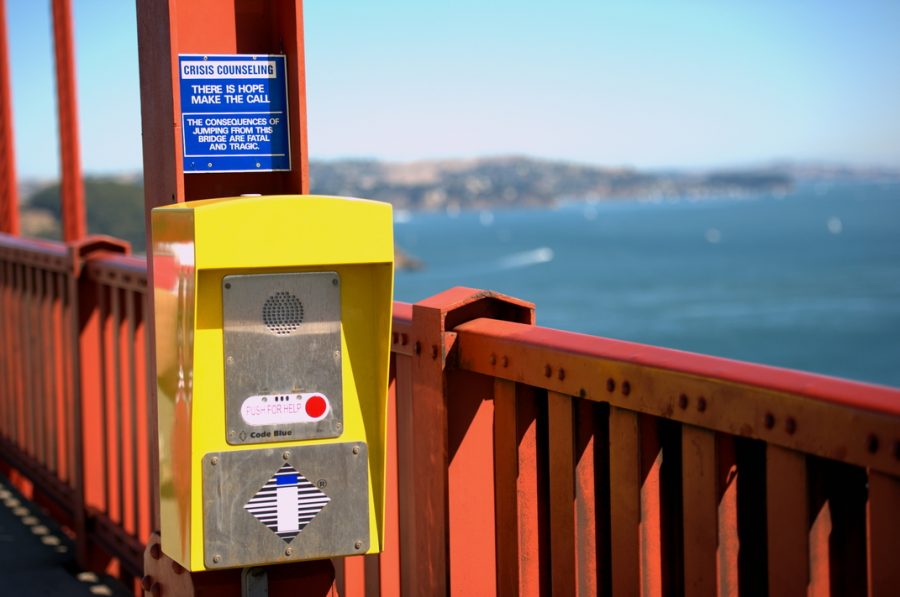 Sign and telephones hang along the Golden Gate Bridge to help stop those considering suicide from committing the act.

That is the number of bodies recovered due to suicide from the Golden Gate Bridge since its construction.

Tall barbed wire fences stand on both ends of the bridge, preventing those who may be considering ending their lives from being able to climb over the otherwise short barrier and into the bay.

Blue signs stating “there is hope” and warning of the consequences of jumping are scattered across both sides of the bridge in addition to phones that lead to crisis counselors.

But this has proven to be not enough.

Individuals still continue to take the plunge into the cold and dangerous waters of the San Francisco Bay, causing the Golden Gate Bridge to be dubbed a “suicide bridge.”

A new plan, introduced in 2014, aims to curb or stop suicide attempts from the Golden Gate Bridge by creating a stainless steel net 20 feet below the bridge that comes 20 feet out on either side.

The plan was met with some debate as well as funding issues but has since moved forward.

In an interview with The Mercury News, Denis Mulligan, general manager of the Golden Gate Bridge, Highway and Transportation District (GGBHTD) said, “The district is committed to saving lives. Arguably, there is no more noble task for government than saving lives. The net will not be visible to motorists driving on the bridge and it was designed to be sensitive to views of and from the bridge.”

Construction of the net will move forward this year and is expected to be completed by 2021.

Though construction is only scheduled for nighttime, the GGBHTD proposed a $2 million grant to pay the California Highway Patrol to monitor the speed limit and construction areas during those times.

“In order to utilize the bridge roadway, the work must be performed at night,” according to a report sent out by bridge staff.

The total cost of the project is estimated to be upwards of $142 million, but due to the emotional appeal of the project, the money was not difficult to collect.

“The fact that the number of dollars needed was gathered in two months is astounding. It goes to show the commitment that is there among all sectors of the Bay Area, state, and feds. We are committed to getting this net built,” said David Rabbit, chairman of the bridge committee, to the Mercury News.

The hope is that the Golden Gate Bridge will cease to be a place of tragedy and continue to be a popular tourist attraction for people around the world.