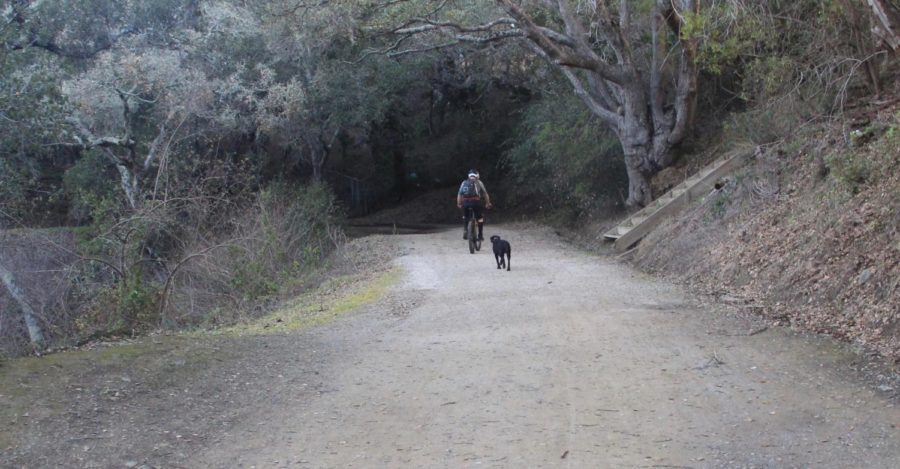 Chris Ketner bikes as his dog, a black lab named Noodle, walks alongside him. Ketner often takes Noodle to walk in public areas like Waterdog Lake and wishes there were more areas open to the public for dog-walking.

Dogs are a man’s best friend, but they can’t follow men everywhere.

Dogs are prohibited in certain hiking and recreation areas in San Mateo County, such as Coyote Point and Crystal Springs. There are various reasons for not allowing them.

“I think it’s mostly for safety because there are little kids sometimes on tricycles and dogs can be startled or unpredictable, so banning dogs is safer for those with children,” said Janine Fabel, a Belmont resident.

However, more and more public areas are opening to dogs.

In October, the San Mateo County Board of Supervisors voted to place a new set of rules to allow leashed dogs to walk in six spots owned by the Parks Department.

“The county updating its ordinance to allow dogs in more places is a good idea. Having more dog accessible places would mean dog owners can show their dogs more diverse trails,” said Olga Pyalling, a junior.

Coastside DOG is a group dedicated to having more public areas for responsible dog walking and have various petitions to help support their cause. Their Open More San Mateo County Park to Dog Walking! petition gained over 45,000 signatures. They are currently still aiming to open up more trails and parks for dog walkers.

“I walk my dog on public hiking trails at least three times a week. I wish there were more dog-friendly trails in the Bay Area,” said Chris Ketner.

However, not everyone was happy about dogs being allowed in more places. Coyote Point is a recreational area that still does not allow dogs. Karen Wight, a park ranger at Coyote Point, does not want the rules against dogs to be changed.

“There’s wildlife here and if they smell a domestic animal, including dogs, they will get threatened. [The rules] aren’t just against dogs, you can’t have a pet here, cats, rabbits, birds, and etcetera,” Wight said.

At Coyote Point there are also repercussions if someone brings their dog.

“It’s against the rules of the park; you can get a misdemeanor for it. If you’re a repeat offender it can change to an infraction,” Wight said.

Coyote Point is undergoing a process to determine if dogs should be allowed in the future.

“San Mateo County parks, including Coyote Point, has a system. As soon as we catch someone with a dog, we get some information on it like what breed it is, why it is here, things like that. Then we turn that data into the head office and after they go through it they will decide if [Coyote Point] will allow dogs in the future. I don’t want them to,” Wight said.

Dog cleanup is also a problem prevalent in allowing dogs in more public places. Not cleaning up dog feces has environmental repercussions, which is why picking up waste with a bag is encouraged.

“I don’t mind having a dog on a trail but sometimes cleanup is an issue. Some people will clean up their dogs’ poop with a plastic bag but then leave the plastic bag on the ground, which also isn’t great,” said Sandy Green, whose name has been changed to protect their privacy.

Some dog owners, however, want the change to happen.

“It bothers me that some trails and reserves don’t allow dogs. I think there are a lot of unnecessary restrictions against them. I hope more places will open their gates to dogs in the future,” Ketner said.

Ketner feels that the bad habits of other dog owners reflect badly on owners that make an effort to walk their dog responsibly.

“I worry the behaviors of some dog owners isn’t helping the situation, but most of us are here to follow the rules,” Ketner said.