such as “jettison” and “treacly.”

According to College Board, the SATs are being redesigned into a format called the Common Core. For example, vocabulary words such as the few mentioned above will be replaced with common words such as “synthesis” and “transform.”

First administered in 1974, the SATs were designed to test college and career readiness.

In the first several years, 1974 to January 1994, the SAT consisted of a Math section with multiple choice and quantitative comparisons. It also included a Verbal section with 71 percent being the vocabulary items and 29 percent reading items. At that time the SAT editions included a Test of Standard Written English, which were used for placement purposes only.

The second version of SAT was from March 1994 to January 2005. These tests had a Verbal section with vocabulary, losing its dominance, at 48 percent and reading items at 52 percent. Longer passages and paired passages were added. The Math Section additionally had student-produced responses and calculators were allowed for the first

The current SAT test, from March 2005 has a, currently addressed as, Critical Reading section with vocabulary items at 28 percent and reading items at 72 percent. Short passages were added. Now, the Math section has only two parts: multiple choice and student-produced answers. Quantitative comparisons were eliminated and new topics were introduced including absolute value, fractional and negative exponents, and basic combinations and permutations. The newly evolved Writing Section included a 25 minute essay, sentence improvements, error recognitions and paragraph improvements.

According to Compass Education School, “Math has gone from a test with its own

idiosyncratic way of presentation math to one that more closely reflects how math is taught in school. However, it remains a ‘math reasoning’ test in contrast to the more academic Subject Tests or ACT math.”

Furthermore, College Board felt that the writing skills originally tested by the TSWE, English Composition Achievement Test, and the SAT II: Writing should be assimilated an equal associate in the new SAT. The Writing section scores are the only scores that cannot be compared to previous test scores.

Guidance Counselor Kristen Vernon said, “College Board’s goal is to align themselves with what colleges are looking for so they are constantly doing research to make sure that they are meeting up to requirements.”

Then in 2008, the National Association of College Admission Counseling debated whether or not colleges needed the standardized testing scores. Some colleges stated that

they were not gaining much from the required test.

The reason why some colleges go “test-optional” or “test-flexible” is because of the complaints of students: the build-up of test anxiety and taking a test in a tension-filled classroom does not define the aptitude or the work ethic of the student.

Oberlin College, a test-optional school, stated that standardized testing are to predict if the student will succeed in their first year of college, but not something that would predict success in life.

Appointed last Oct., President of College Board David Coleman called for a redesign of the current SAT into a more Common Core structured exam.

The Common Core originated from the materials learned and covered in the curriculum in each grade. Some colleges and test preparation academies say that the SATs are becoming more like the the ACTs such as math is moving into more logically processed information.

Coleman envisions this change to be a way to help students and colleges focus on a core set of knowledge and skills essential for college and career success.

Senior Anne Litton said, “The current SAT format does not judge students correctly because it’s not related to what we do in school. A school curriculum based test will be more accurate rather than unrelated things that we do not learn in school.”

For example, Coleman wants to get rid of archaic words and replace them with common words because students have been referring to SAT vocab words as words that they would never use in the future.

David Coleman addressed College Board members in a letter saying, “This is an ambitious endeavor, and one that will only succeed with the leadership of our Board of Trustees, the strong coordination of our councils and committees, and the full engagement of our membership.”

Additionally, Coleman doesn’t want students to have the need to go to an outside SAT preparation academy.

Vernon said, “If [the redesigned SAT] is similar to the test students take for Common Core then the SAT will be more familiar to students. Perhaps they might get higher score.”

Senior James Baskerville similarly said, “[Common core] is definitely a good thing, it reflects what you are learning in high school and not something that you’ll have to prepare outside of school.”

Coleman first thought to redesign the SAT when he spoke with a Hong Kong SAT test preparation tutor. The tutor told him that she helped her students write good essays by telling them to create supporting evidence. The evidence did not have to be factual.

Coleman decided to change the current essay format from students responding to a prompt  and adding in false information to students receiving a passage in which students analyze and writing an effective essay. Through this format students would not be able to make up evidence. This is similar to what juniors in AP English Language and Composition do when they write their rhetorical analysis essays.

Another reason to change the SAT was that according to statistics from College Board, last year there were 1.66 million test takers of which  only 43 percent were prepared for college-level work. According to SAT Report on College and Career Readiness, for the fifth year in a row, fewer than half of SAT- takers designated as “college-ready.”

College Board set 1550 as a “college and career readiness benchmark,” which would meet a four-year college with a grade of B- or higher.

Younger students, however, will see a different and whole new test.

“In the first couple of years [the test will be] definitely harder probably because [students are] going to have to get used to it because there was no [previously] existing experience. However, eventually I think [the scores] will get better,” said Baskerville.

The new SAT test is predicted to be revealed in 2015. 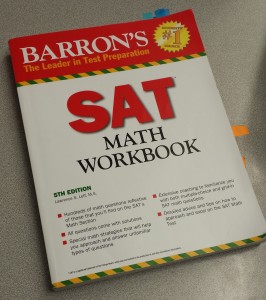