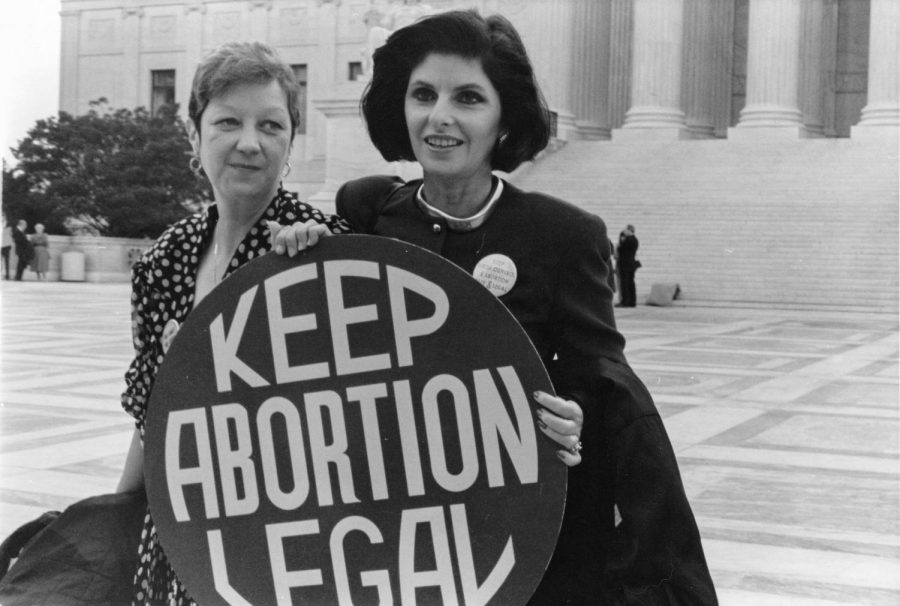 Norma McCorvey, widely known as Jane Roe, and her lawyer stand outside the Supreme Court in 1989. At this time, the Supreme Court was trying Webster v. Reproductive Health Services, a case that could have overturned Roe v. Wade.

A new Mississippi court case threatens to unravel some protections provided to women by Roe v. Wade, a landmark decision in the abortion rights debate.

The Mississippi state legislature passed a law banning most abortions after the 15th week of pregnancies.  Mississippi’s sole abortion clinic currently provides abortions up to 16 weeks, meaning the legislation passed gives women one less week to receive abortion care in the state. Many claim that this is a direct challenge to Roe v. Wade, which made abortion legal in all 50 states and asserted that doctors may perform abortions before fetal viability. The Supreme Court has decided to add the case to its docket for the next term, which starts in October, to determine whether or not the law should go into effect.

This new case has sparked outrage and hope across the country, as reproductive rights activists recognize this as one of the generation’s most significant abortion proceedings. During Donald Trump’s presidency, three new Supreme Court justices were appointed — Brett Kavanaugh, Neil Gorsuch, and Amy Coney Barrett — replacing Anthony Kennedy, Antonin Scalia, and Ruth Bader Ginsburg. Pro-life and pro-choice advocates believe the influence of the new conservative Supreme Court may pass the Mississippi law, setting a precedent for future abortion restrictions.

Laurie Roberts, the co-founder of the Mississippi Reproductive Freedom Fund and the executive director of Alabama’s Yellowhammer Fund, claims that pro-choice activists are concerned about the future of abortion rights and the immediate aftermath of the case.

“They know people do not want an abortion-free America. They know the polling says that people don’t want it… They keep trying to say, ‘Oh, no, all that will happen is Mississippi will allow an abortion until 15 weeks,’ but that’s not what will happen. What’s going to happen is it’s going to trigger these trigger laws, where if the standard of Roe [v. Wade] ever falls, there are a bunch of states where, automatically, their clinics close,” Roberts said.

Sophomore Francesca Brocchieri worried about women’s options if abortion were no longer legal.

“I think [the Mississippi law] would probably just lead people to seek out different methods of abortion that aren’t going to a doctor and getting it done professionally. I think that would probably have a negative effect on a lot of people,” Brocchieri said.

Kristin Turner, founder of Take Feminism Back and executive director in-training of Pro-Life San Francisco, sees this case as a chance for states to become more autonomous regarding their abortion restrictions.

“I would say this case is really important because this is a direct challenge to Roe v. Wade… it’s going to, first of all, tell us where other pro-life court decisions are going to land in the future and how these judges believe things should be dealt with. It’ll also tell us whether or not the decision of legalized abortions is going to go back to the states, which is important because the state battles that we have in the pro-life movement are very strong depending on the state we’re in,” Turner said.

Many southern states, including Mississippi, have limited educational programs that would help decrease the unplanned pregnancy rate. Sex education in Mississippi mainly revolves around abstinence and does not allow for physical demonstrations regarding contraceptive measures, as demonstrated by the Department of Nursing.

Turner’s organizations focus on offering aid and education to women in California to lower the number of unplanned pregnancies, reducing abortions.

“We do believe that abortion should be legally limited. We believe that the unborn deserve equal protection under the law. With that, we believe that equal protection must also come with support systems that make sure that we’re not just leaving these people out on the streets to figure it out for themselves, and we’re trying to come up with compassionate solutions,” Turner said.

Roberts also wants to increase options for women in their area. One of Roberts’ main goals as a reproductive rights activist is to increase the number of abortion clinics in her home state, Mississippi.

However, Roberts agrees with Turner that abortion access in states with strong pro-life movements may dwindle if the question of abortion legality were to go back to the states.

“The truth is if Roe falls, which is highly likely, my goal of having more clinics is not going to matter; what’s going to matter is how we get abortion access to people in a South with no clinics,” Roberts said.

This past year, at least six other states have attempted to pass stricter abortion laws, revealing how contentious this issue is today, despite Roe v. Wade’s passage nearly 50 years ago. The Supreme Court will try the newest Mississippi case in its next term, and a verdict is likely to come in 2022.

Like Turner, many believe the argument regarding the morality of abortions comes down to weighing bodily autonomy against the life of a fetus.

“I’ve always been a feminist, and I felt that this was a reasonable extension of my philosophy as a feminist. I believe that our intersectional feminist philosophy should guide us to accept the rights of the unborn and everything they have to offer. I don’t think my rights as a woman are restricted by giving rights to another person,” Turner said.

However, others, like Roberts, argue that choice is essential, drawing from their own experiences with unplanned pregnancies and that if abortion laws become more restrictive, the choice to not be a parent is removed from numerous individuals.

“When I was 16 and I got pregnant, abortion just wasn’t even an option to me. Now I don’t regret having my twins at 16, but what I do regret is not having all my choices equally presented to me so that I could be free to know that that choice was freely chosen by myself.  I think sometimes people don’t think about the fact that when you have all of your choices given to you, then the choice that you make is fully yours, including the choice to be a parent,” Roberts said.