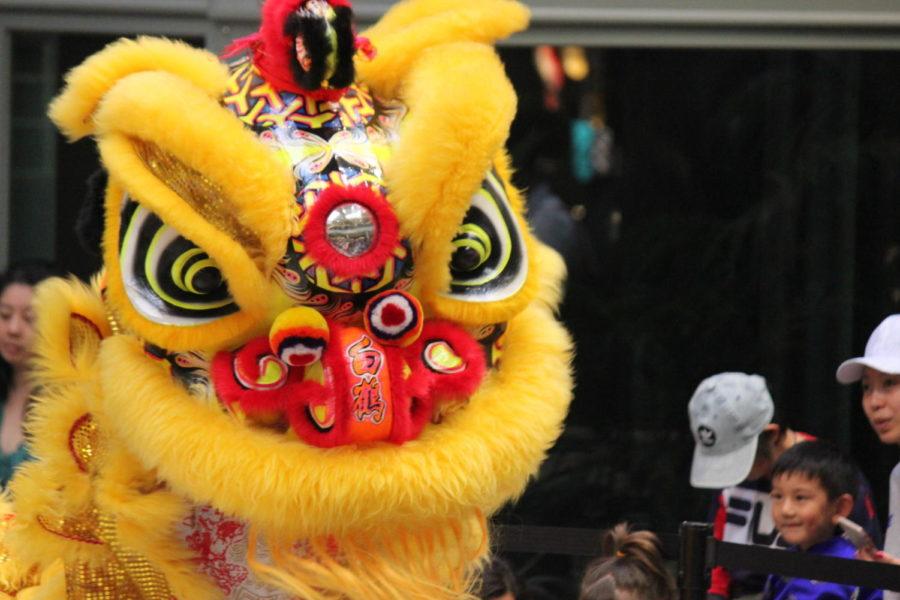 The yellow lion dances in front of the crowd. The lion dance symbolizes good luck in Chinese culture.

Chinese New Year is a holiday that goes back to ancient times, and it is still celebrated today. The date of Chinese New Year, which is also known as the lunar new year, usually falls between Jan. 21 and Feb. 20. This year it is on Feb 16 and this is the year of the dog. At the Hillsdale Mall, a Chinese New Year event took place on Feb. 8.

The main feature of the event was the lion dance. Lion dances symbolize good luck and are supposed to ward off bad spirits. The dancers that were inside the lion costume were from Leung’s White Crane.

“We get together with family and have good food. We also give red envelopes to the children. This year we’re also going to China Town to see the lion dancing there. I came here to see the lion dance and show my daughter,” said Liru Guo, an audience member at the Hillsdale Mall event.

The lions were brightly colored with intricate designs, one red and one yellow. Red and yellow are both lucky colors in Chinese culture.

“Inside [the lion costume] it’s really hot, but it’s also fun. At the end of performances it’s rewarding because it took a lot of time [to practice and perfect],” said Calvin Zhen, one of the dancers from Leung’s White Crane.

The lions danced to the beat of loud drums and cymbals, which helped the dancers maintain rhythm as they danced close to the crowd, allowing the crowd to stroke the lion costume. They also threw small trinkets into the crowd for good luck and to symbolize fortune.

“My favorite part of the event was seeing the lion dancers, I also liked seeing my name in Chinese calligraphy on the fan I got,” said Charlotte Crader, a student at Grace Lutheran School.

At the lantern crafting table, there were various foam stickers kids could put on their lanterns. They had shapes, English letters, and even some Chinese characters. The characters featured were words like “love” and “honor.”

The calligraphy table featured a Chinese calligrapher who transliterated names into Chinese characters. Then she wrote the characters onto a fan and gave them out to anyone that wanted one.

At the end of the event, volunteers gave out red envelopes to children with Chinese good luck coins in them with a small message on what they are and how they are significant to Chinese culture.

The Chinese New Year event was organized by the Hillsdale’s kids club program.