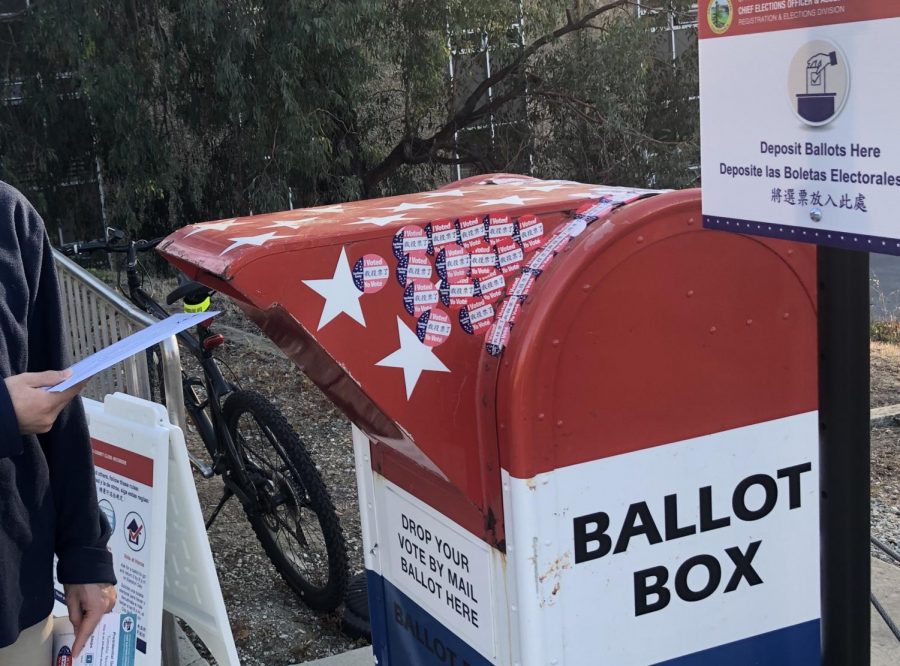 The recent Sequoia Union High School District election determined new board of trustee members, who will be working to address key issues for students in our district.

On Nov. 3, 2020, much of the nation’s attention was on the presidential showdown.  However, much closer to home, local voters decided on candidates who will immediately impact local students.

Elections were held for the Sequoia Union High School District (SUHSD) Board of Trustees, with five candidates running for three open seats. The continuing members included Alan Sarver and Chris Thomsen, who each have two more years in their term. The term of incumbent Carrie Du Bois expired, but she ran unopposed. The remaining two seats were decided by the district electorate. Together, the five voting members of the district’s school board will make decisions for the district’s schools, Carlmont High School, Menlo-Atherton High School, Sequoia High School, Redwood High School, Woodside High School, and the TIDE Academy, including key issues that range from what classes are approved and offered to how education is conducted during the COVID-19 pandemic.

The race was notable as this year’s SUHSD election marked some developments in how the school board is elected. Four years ago, the once at-large elections were changed to specific area elections—electing one trustee from each of five areas in the Sequoia Union High School District. Candidates must live in their area, and only voters in each area can vote for those respective candidates. The district has five designated areas: A: Belmont and San Carlos; B: Redwood City; C: Portola Valley and Woodside; D: Palo Alto, Atherton, Menlo Park; and E: East Palo Alto. This year marked the first election for Area E, which was heavily scrutinized due to its representation of the students and families who live in East Palo Alto.

As election results were carefully tallied in San Mateo for all elections, the SUHSD school board of trustee winners became clear.

For District E, another newcomer, Shawneece Stevenson (71.51%), defeated opponent Jacqui Cebrian (28.49%). Before the election, Jacqui Cebrian dropped out of the race, citing her support and endorsement for Stevenson.  However, her name was already on the ballot and had gathered votes.

Incumbent, Carrie Du Bois, was elected to her 3rd term as she ran unopposed for her District B seat

The new make-up of the board hints at changes, as the board now includes fresh faces for the first time in several years. Re-elected incumbent Carrie Du Bois expressed frustration that over the past four years, the board has not conducted enough thorough conversations at the public board meetings and is optimistic about the fresh faces.

“I am thrilled by the new board. I am excited we have different strengths and expertise.  I think we have the potential for a high functioning board, where we can have good conversations and even challenge each other as we seek what is best for all stakeholders,” Du Bois said.

Du Bois feels Ginn’s background in finance and technology and his experience as a school board member will be welcome strengths. Given the district’s diversity, Du Bois praised Stevenson’s professional experience working with people daily as a social worker.

“She will be a great addition,” Du Bois said.

Rich Ginn, newly-elected Trustee to Area C, believes his previous service on another school board will help him serve his new community

While the newly-elected members have not yet taken office, both Ginn and Stevenson are clear about their interests for the school district.

Ginn expressed his hopes for the board in terms of short, medium, and long term goals. In the short term, Ginn believes that the focus should be on how the board can operate collaboratively, what modifications can be made for high schoolers during the pandemic, and on finding a new superintendent, since SUHSD currently has an interim superintendent, Crystal Leach, following the resignation of former superintendent Mary Streshly in September. Once past those immediate needs, he wants to focus on helping students prepare for their future.

Shawneece Stevenson, newly-elected trustee to Area E, was encouraged by family and community leaders to represent her area.

In her first role as an elected official, Stevenson expressed her excitement at being the first area representative for Area E. As a 20-year resident of East Palo Alto and a parent with students with diverse learning needs, Stevenson and her family felt like she could contribute her unique perspectives to the school board. Stevenson also believes that her previous professional employment as a social worker among diverse people allows her to relate to many perspectives. Stevenson explained that a key issue for the newly-represented area is that parent and community input from East Palo Alto is often lower than in other communities in SUHSD.

“How do we solicit community engagement?  How do we get families to share their voices with us? If they speak, how do we make it feel worthwhile and substantial? We want them to make sure their voice is important,” Stevenson said.

Du Bois, Ginn, and Stevenson all agreed that the most pressing current issues are related to the ongoing COVID-19 pandemic. Early board of trustee decisions last spring dealt with whether grades would be determined with letter grades or a pass/no pass method. As this school year began with distance learning, new questions persist concerning equity among all students, so the board focused on mitigating technology gaps. The district has been careful to consider equitable access to the internet and devices for distance learning. It has made efforts to check out Chromebooks and hot spots to ensure technology access to the online classrooms.  At present, key decisions remain as to when in-person or hybrid learning will resume given close monitoring of the state-wide coronavirus tiers. The new board will also need to begin the extensive search for a new SUHSD superintendent.

Closely monitoring decisions made by the board are the district’s teachers. President of the SUSHD’s Teacher’s Union (SDTA), Edith Salvatore, recounts high tensions over the past nine months as teachers, parents, and students all lobbied the board over issues such as grading and distance learning during the COVID-19 pandemic. In assessing potential candidates, “the union prioritized team building and focused on the stakeholders,” and “was very excited to have both of the union’s endorsed candidates elected by the communities,” Salvatore said.

Given the importance of the board of trustee’s decisions, student input is key. A recent decision to require ethnic studies, beginning with freshmen entering in 2021, is the type of school board decision that will affect all students in the district.  However, students may not realize who represents them, making decisions about grading, textbook adoption, new courses and graduation requirements. Carlmont sophomore Llewelyn Bissell summarized this viewpoint.

“I am not aware of who the members of the school board are, what I would ask them, or how I can contact them,” Bissell said.

Menlo-Atherton senior Sathvik Nori represents district students on the SUHSD Board of Trustees.

“I strongly encourage anyone interested in sharing their thoughts or concerns to email me at [email protected] and the rest of the board,” said Nori.

Click on the file below to hear a message from your Student Board of Trustees Representative, Sathvik Nori.

The new board consisting of Sarver, Thomsen, DuBois, Ginn, and Stevenson, will take office on December 16, at a ceremony that will swear in the newly-elected members and thank retiring members for their service. Given health restrictions, all board meetings are currently on Zoom.  Those wishing to watch can log on to the public meetings via Zoom, using the login information.

With an entire district engaged in distance learning amidst a worldwide pandemic, and with the search for a permanent superintendent, all stakeholders in the Sequoia Union High School District should be watching.