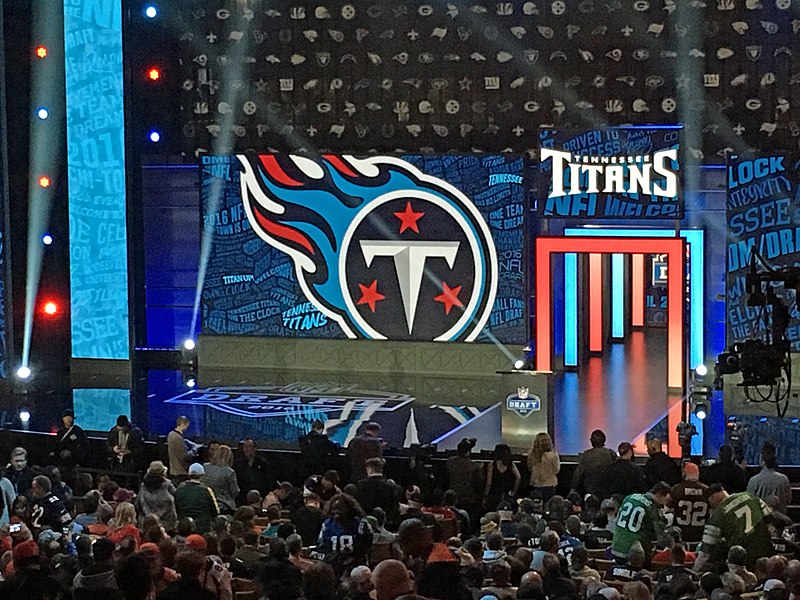 The Tennessee Titans make their selection as fans await the announcement in the first round of the 2016 NFL Draft. Due to the outbreak of COVID-19, the 2020 draft will be held virtually to keep people safe and healthy.

The months of March and April are some of the most exciting months for sports fans everywhere. Between March Madness, the start of the MLB season, the NBA playoffs, the NFL offseason, and much more, there is so much action for all sorts of fans to enjoy. That is until the COVID-19 pandemic forced all leagues to cancel their seasons and suspend operation, all except the NFL.

When the NBA suspended the basketball season on March 11 due to concerns over the safety of players, there were some concerns that the NFL would postpone the new league year for football set to begin at 4 p.m. ET on March 18. However, they refused to do so and announced that they would continue as planned.

While there is a significant difference between playing a game against other players versus meeting with team executives to sign a contract, the human-to-human contact is still dangerous in potentially contracting the virus, so the NFL took measures to avoid this. Instead of the regular team meetings, coaches and managers did not have to meet with free-agents. They were able to conduct negotiations and interviews via some form of online communication, such as video chat.

This allowed teams to sign players in a manner that was safe and followed quarantine laws and recommendations set in place.

While there were many critics of this decision to continue free agency, doing so allowed sports fans to have some fun and enjoy one of the last links to the sporting world in such a dark time.

This is especially true of the Tampa Bay Buccaneers fans. When future Hall of Fame quarterback Tom Brady officially left the New England Patriots in favor of the Buccaneers, the entire sports world was taken by a storm, as Brady had spent the entirety of his 20-season career playing for the Patriots, winning six Super Bowls during that span, the most by any quarterback ever. While Patriots fans were grieving and thanking Brady for the time he spent with them, Buccaneers fans were thrilled, with some even believing that the signing could bring them a Super Bowl ring.

However, while free agency and the offseason can be exciting for many, some fans may be disappointed or upset with how things turn out. For Houston Texas fans, many of them felt outraged and stunned by their front office when they traded away All-Pro and top five wide receiver Deandre Hopkins and a 2020 fourth-round pick in return for running back David Johnson, a 2020 second-round pick, and a 2021 fourth-round pick.

“For me, I think at first it was the big names especially that got me excited with what was going on, and it took my mind off of the crisis, but after a bit, you realize that it’s just business and the spectacle is just a bonus of that,” said Josh Graves, a junior. “But at the end of the day, it’s good entertainment, especially in the absence of sports; it fills a void in so many people’s free time.”

With free agency wrapping up, the attention of the NFL turns to the 2020 draft. Because large gatherings are prohibited, the NFL canceled the typical in-person draft day activities, although the draft is still scheduled to take place on April 23 and run through April 25.

“Planning for the draft is a good example of how we will need to think differently, embrace technology and collaborate,” NFL Commissioner Roger Goodell said.

The draft has shifted to a virtual format where teams will make their selections and the results televised. On the morning of April 20, the NFL tested the system they plan to use by running through a mock draft. They experienced technical difficulties from the get-go with the first pick and saw that there were issues with bandwidth and communication.

More on today’s mock draft technical glitch: The Bengals didn’t do anything wrong; wasn’t their fault. But the glitch resulted in a two-and-a-half minute delay, per source. https://t.co/q70MLZ14D4

To accommodate for this, the NFL decided that they’ll pause the draft if any errors occur, so that they may fix things to keep it fair.

While the draft was able to stay on its scheduled date, the NFL did delay the start of their offseason programs as COVID-19 forced teams to close their facilities.

“Based on the most recent guidance provided by leading health officials, and in consultation with the National Football League Players’ Association (NFLPA) and both our and the union’s medical advisors, we believe this is the appropriate way to protect the health of our players, staff, and our communities,” Goodell said.

To make up for this, both the NFL and the NFLPA agreed to a voluntary virtual program in which players can do workouts, class instruction, and non-football educational work. Teams are even permitted to send monitoring and exercise equipment to players, so they don’t have to spend over $1500.

This program extends until June 26 with hopes that the COVID-19 pandemic will die down, but they are planning a secondary option in case that doesn’t happen.

Not only is the NFL trying to save their offseason, but they are also trying to keep fans entertained. They gave free access to Game Pass on their website until May 31, allowing fans to rewatch past games in full, in a condensed format, or a broken-down, coaches tape, as well as watching highlights from their favorite players.

All of the NFL’s actions during this crisis offer hope that the future of sports will not be lost.