Night of Lights brings Christmas spirit to Half Moon Bay 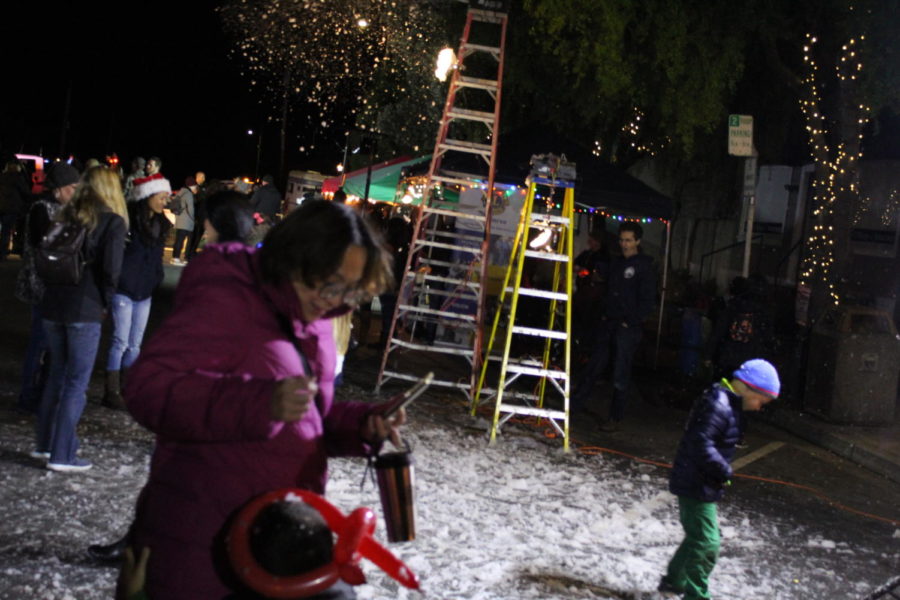 People play in the fake snow pumped out by snow machines.

Christmas spirit is starting to light up the faces of citizens in the Bay Area.

The Night of Lights celebration in Half Moon Bay took place on Dec. 7 from 6 p.m. to 9 p.m. It began with a tree lighting ceremony at Mac Dutra Plaza followed by the crowning of the festival’s prince and princess.

While waiting for the Night of Lights Parade to start, people enjoyed shopping at a variety of shops, like Coastside Books, that stayed open during the event. Sam’s Chowder Mobile and the Ark North Indian Grill food truck served warm and spicy food to the cold crowd. The local fish and chips restaurant opened a stand to serve roasted chestnuts.

Hundreds of people lined Main Street waiting for Santa to roll by on his float. Maria Cortez, a Bay Area resident, attended the event with her 7-year-old son.

“I really like coming out here to see the lights. The positive and welcoming energy of this festival is really amazing,” Cortez said.

The parade began rolling by at 7 p.m.  There were floats, classic cars, decorated trailers, and semi trucks.  Most were sponsored by local businesses like Alifano Computers, Half Moon Bay Winery and Farmer John’s produce. Holiday music played from the floats and cars as they drove along the route, and kids riding in them threw candy to the attendees.

After Mr. and Mrs. Claus waved farewell from a vintage firetruck, the crowd broke up and people started looking for hot chocolate and pastries and formed lines at the Half Moon Bay Bakery and the Moonside Bakery and Café.  The moon-shaped chocolate chip cookies were especially popular.

At the corner of Main Street and Kelly Street, local business and community groups had booths where treats and Christmas decorations were sold.  The Half Moon Bay Lion’s Club had a booth, where long-time business owners offered advice, right across from the Boy Scouts, which were raising funds by selling wreaths.

A pony ride and petting zoo were set up at the end of Kelly Street.  The ponies were tethered to a central wheel and coaxed to walk in a circle. Children petted pot-bellied pigs, chicken, geese, and goats in the zoo.

Brian Cohen, a resident of San Francisco, talked about how excited his five-year-old, Zach, was when he got to ride on one of the ponies.

“Zach couldn’t stop smiling the whole time he was riding the pony, and I bet he’ll talk about it the whole way home,” Cohen said.

By 9 p.m., most people had gone home.  A few holdouts were at a coffee shop, the Café Society, where a Brazilian group was playing Bossa Nova music.  It seemed like a place for the over-50 crowd to get together and dance.

Christmas spirit is all about enjoying the season with other people who want to celebrate.  That is exactly what the Half Moon Bay Night of Lights provided this past weekend.