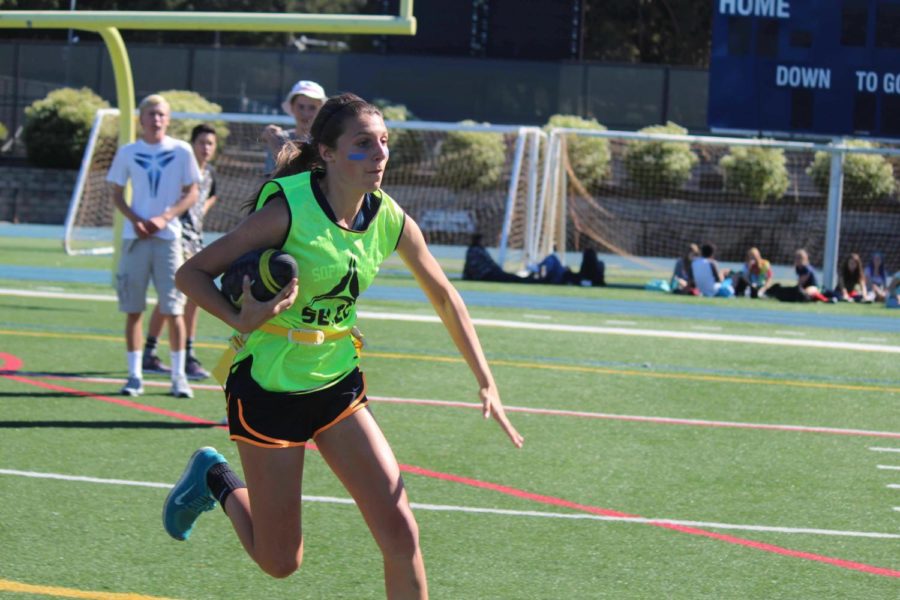 Emma Castro runs the ball down the field in one of last year's powder puff games. In previous years, powder puff took place at lunch during homecoming week.

The nighttime Powderpuff is a new twist on the girls’ football tournament that usually takes place at lunch during homecoming week.

The idea of having nighttime Powderpuff was inspired by other schools that have done it in the past. ASB decided to try out the event to encourage more people to join and watch the game.

“The idea behind Powderpuff at night came because we thought it would add more spirit in the school. It makes it seem more like a football game and have that ‘Friday night lights’ type of vibe. We will be adding fun activities to the night, as well as decorating the bleachers and having food trucks,” said ASB Vice President Tyrese Lopez, a senior.

According to Dance Commission Supervisor Michelle Tennin, a senior, the night time Powderpuff games will be similar to the lunchtime games, except ASB wants to increase the student involvement and bring some fun, healthy competition to homecoming week.

The first round of games will be at lunch the Monday of homecoming week, and the following night will consist of male cheerleading routines, the consolation game, and the championship game.

“I’m so excited about the changes. It’s going to feel like a real football game, and I’m so happy because I think it will encourage more participation from people watching. All of the grades take it really seriously by practicing and doing team bonding activities, like making shirts,” said Isabella Mattioli, a sophomore.

This year, Powderpuff will be more interactive for the audience as well. They can be active during the game in order to get points for their class for homecoming week.

“There were a few challenges on the road to organizing this since it is something new, and we don’t really have anything to base it off of. Planning a new activity can always be challenging since we don’t know what to expect,” said Lopez.

Despite the troubles of organizing a new event, the excitement of the players has made it all worth it.

“I’m most looking forward to just playing and having fun with my fellow sophomores. It also allows me to get to know other sophomores,” said sophomore Kathryn Auyoung.