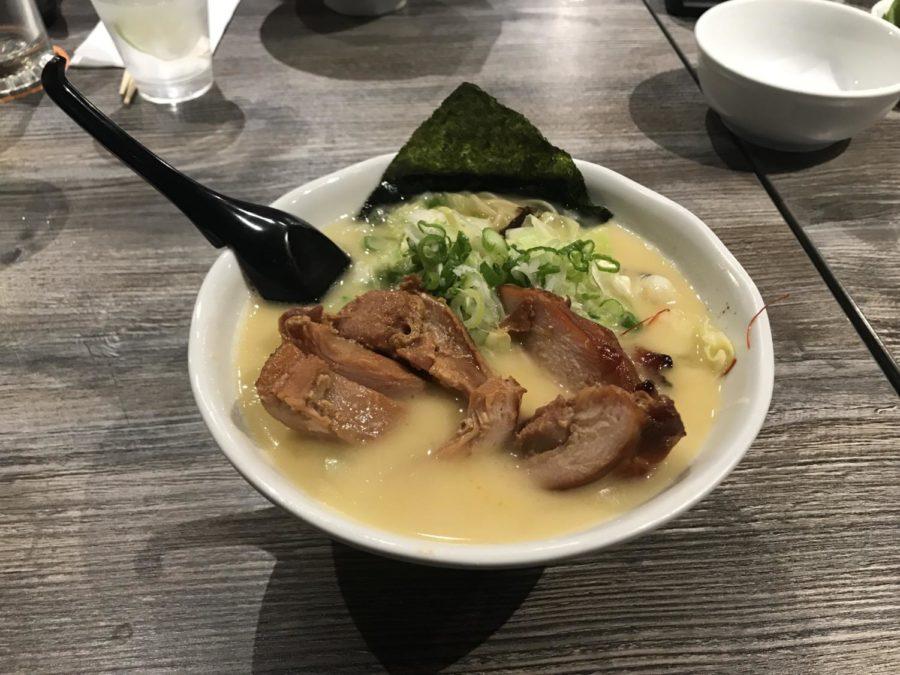 The heaping bowl of ramen was pilled high with toppings.

Finding a great place to eat in an unfamiliar area can sometimes be challenging. For those traveling to Southern California, Nikka Ramen in Goleta is a delicious option

Inside is a dim room packed full of people. Despite the many people gathered and waiting outside, my family of four only waited about 10 minutes to get seated on a Friday night.

Once seated, the service was a bit slow. There were only a few waiters, likely college students at the nearby UC Santa Barbara, for the packed restaurant. Even so, our waiter was friendly and did his best to make recommendations on which ramen to get.

There was one major downfall before we even got our food: they were out of sliced pork. For meat, the restaurant normally offers pork, pork belly, and chicken. As someone who typically opts for sliced pork at other ramen restaurants, I chose the chicken so as to avoid the fatty pork belly.

I ordered the tonkotsu shiro original ramen, while others at my table chose the tonkotsu spicy ramen, the shoyu ramen. and the vegetable ramen, all with chicken. Each bowl was around $12, a bit on the pricey side for the area but not surprising compared to Bay Area prices.

We also started with edamame, which for $3.50 had little to be said about it other than it tasted like edamame should.

The ramen came out surprisingly quickly with a huge portion.

My ramen was piled high with chicken, seaweed, noodles, and chopped cabbage. The broth in my soup had the perfect balance of flavor: not too salty but also thick, which coated the noodles well.

The only disappointing part was the chicken, which I felt like belonged on its own plate as a teriyaki dish. I was really missing the thin texture of the usual pork, rather than thick chunks of chicken which had flavors that didn’t pair well with the broth.

Overall, though, the soup was comforting and filling. Although it cost $12, the huge portion would have been enough to fill up me and another person.

I would definitely recommend stopping by Nikka Ramen for anyone traveling to Southern California in need of a delicious soup.