Nobody is above the law 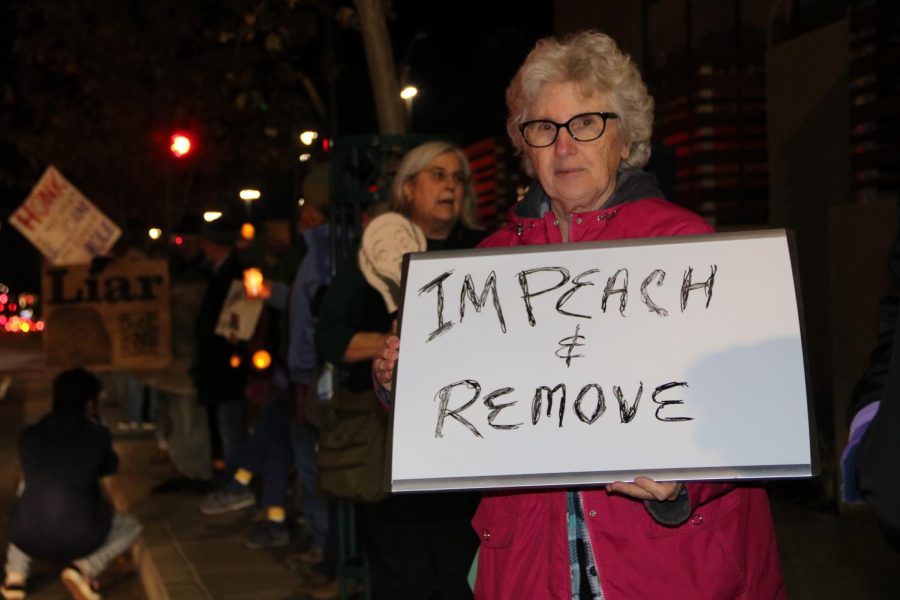 “This is what democracy looks like!” chanted a crowd of over 500 protestors.

On Tuesday, Dec. 17, the evening before the House of Representatives would vote on the impeachment President Donald Trump; people took to the streets in over 600 locations nationwide.

In San Mateo, across the street from Hillsdale Mall, peaceful protestors of all ages and ethnicities gathered to urge Congress to impeach and remove Trump.

“It was inevitable that his criminal ways would come to light. It was just a matter of time,” said Wendy Rose, an event organizer.

The Nobody is Above the Law event had been orchestrated by MoveOn, an organization founded in 1998 in response to Bill Clinton’s impeachment. The organization uses the impact of the internet to connect like-minded people to push a progressive agenda. One of their primary goals over the past couple of years is to oust Trump from office.

In response to the two articles of impeachment drafted by Congress, thousands of Americans participated in the Nobody is Above the Law event.

“He’s withholding military aid to pressure a foreign government for help in a political campaign. He asked the Ukrainian president to open an investigation on a political rival,” said Marilynn Kaplan, a protestor.

Kaplan was referring to the now-infamous July 25 phone call between Trump and Ukrainian President Zelensky, where Trump asked Zelensky to collaborate with his private lawyer, Rudy Giuliani, to look into the Bidens’ dealings in Ukraine during the mid-2010s.

According to the House Judiciary Committee, asking Ukraine to investigate a political opponent, Joe Biden, is evidence of abuse of power.

The second offense is obstruction of Congress. By blocking testimonies of key witnesses before the impeachment hearings, Trump hindered Congress from gathering more testimony from first-hand witnesses, such as White House chief of staff Mick Mulvaney and former national security advisor John Bolton.

The Republican response to the impeachment, brushing off the charges or denying events, has left many people frustrated, leading to demonstrations across the country.

“As the mother of my two children, I have a responsibility to them and myself, to our community and our country, to stand up and make our voices heard. We won’t tolerate what’s happening right now,” Kaplan said.

For many Americans, the two charges did not come as a shock, but they nevertheless fueled the fight against Trump’s presidency.

“I’m a Catholic nun, and I’m for the poor–helping the poor, the hungry, the people in the margins. That’s why I’m here. He’s against everything that I stand for and give my life for,” said Maureen Sinnott, a protestor.

Other demonstrators wanted to send a message to Congress.

“I think our members of Congress must see that actual people are supporting the impeachment of Donald Trump. I wanted to come out here and amplify our voices,” said protestor Myisha Haynes.

Many protestors could no longer stay in the sidelines and opted to make their voices heard.

“Trump and his administration are doing the opposite of what they were elected to do. They were supposed to protect our country, our democracy, our way of life. Impeachment would prove that truth, justice, and morals should matter,” said Wendy Yee, a protestor and retired teacher.

While the House of Representatives has voted to impeach President Donald Trump, the Senate still needs to vote to remove him from office. With a Republican majority, it has been predicted that Trump will likely stay in office, and everything will return to the status quo.

Though an out-of-office impeachment is unlikely, many Americans continue the fight for Trump’s removal.

Sinnott said, “If we don’t impeach him, it’s going to be a precedent for the next president: that they can be as corrupt as they want and nobody will stop them.”